Hear Yolanda Kondonassis And Friends In The APM Studio

Yolanda Kondonassis: Impressions Of The Harp

Hear Yolanda Kondonassis And Friends In The APM Studio

Toru Takemitsu: Toward the Sea -- 'The Night'

Toru Takemitsu: 'And Then I Knew 'Twas Wind' (excerpt) 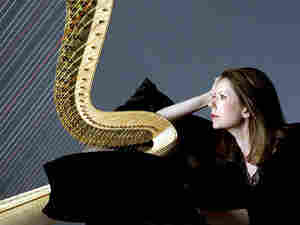 Most classical musicians, however intense their personal beliefs, avoid talking publicly about anything remotely connected with politics. But, to coin a phrase, harpist Yolanda Kondonassis is fed up, and isn't going to take it any more.

Kondonassis became a mother six years ago, and for her, creating a safe future for her daughter includes combating global warming. But how do you do that while playing the harp?

She came up with a collaboration, and a new CD, that she calls, simply, Air. With her friends Joshua Smith (principal flutist in the Cleveland Orchestra) and Cynthia Phelps (principal violist in the New York Philharmonic), she chose a set of atmospheric, ethereal works that have what she calls an "esoteric" connection with nature and the environment. And beyond the purely esoteric, she's donating proceeds from Air to the Environmental Defense Fund.

When the trio joined me in the studio, it was mesmerizing. The 35 minutes of music they played never rises above a whisper. The dynamic range is from gentle to soft, from weightlessness to absolute stillness. But they found such evocative gradations of serenity that after their performance of Toru Takemitsu's "Toward the Sea," I found it hard to do my job — which is to talk. Words felt angular and blocky after the tranquility created by the music.

In her notes about music, and this particular collection of music, Kondonassis wrote:

Music is such an outgrowth of nature and is so organically connected to our collective emotional center. The natural elements such as wind, water, earth, and fire have been inspirations to composers throughout time. Debussy and Takemitsu both took great inspiration from the earth and transmuted that inspiration into an impressionist fusion that continues to touch listeners today.

More About the Players

At age 18, harpist Yolanda Kondonassis made her debut with the New York Philharmonic, and has since appeared around the world both in recital and in concert with major orchestras. In October, 2008 she gave the world premiere of the new Harp Concerto by Bright Sheng, commissioned for her by the San Diego Symphony.

Since 1992, Cynthia Phelps has been the principal violist of the New York Philharmonic. Chamber music is her passion. She appears regularly with the Chamber Music Society of Lincoln Center in New York, and has been a faculty member of the Manhattan School of Music and the Juilliard School.

Nineteen years ago, when Joshua Smith was just 20 years old, he was appointed principal flutist of the Cleveland Orchestra by conductor Christoph von Dohnanyi.

Smith is an active soloist, chamber musician, teacher and blogger. On his blog Soloflute? he writes about everything from yoga and square dancing, to memories of his first encounters with Mozart.