Accessibility links
'Bureau Tehran,' Live From Massachusetts As Tehran cracks down on journalists there, one of the most reliable sources for news has also been one of the most unlikely: a Web site run by a woman in suburban Boston. Kelly Golnoush Niknejad's Web site is fast becoming one of the go-to sites for news from Iran. 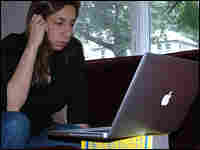 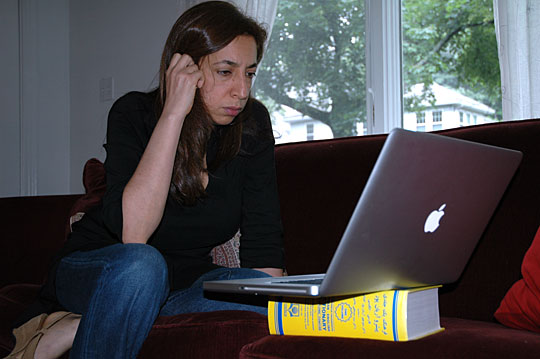 The world outside Kelly Golnoush Niknejad's window doesn't engage her anymore. What matters is relaying information online about her native Iran.

As the government of Iran cracks down on journalists there, one of the most reliable sources for news has also been one of the most unlikely. It's called Tehran Bureau, but it's neither a bureau nor in Tehran. It's one woman running a Web site from a Boston suburb.

From the outside, Kelly Golnoush Niknejad's little clapboard house looks just like so many other on a peaceful, leafy street in Newton, Mass.

But step inside and you're immediately transported a world away to the epicenter of the political turmoil in post-election Iran.

"It's all about fear, and people disappearing, people mourning, a lot of crying," says Niknejad, as she scans through the e-mails and chatter that come to her through the two laptops in front of her.

Niknejad started Tehran Bureau seven months ago. She was frustrated with what she calls the "simplistic and dumbed-down" reporting about her native Iran, so she took it upon herself to do better from her parents' living room.

The idea was to build a network of contributors of Iranian descent, both in and out of the country, who could file stories on everything from politics to the arts. So far, no one gets paid, but Niknejad says she has "an incredible staff of contributors: people who really know the subject, are very passionate about it, who have an incredible, rich network in Iran and among Iranians."

Right after the election, that network bombarded Niknejad with information, and almost overnight, her online magazine of feature stories and analysis became a major go-to source for breaking news.

"It was just, like, coming at me like bullets," says Niknejad. "I didn't have time to sculpt it all into stories, so I just started posting it as fast as I could. The information was raw, so instead of going in and taking the blood out of it, I'll just copy and paste to put out information. "

Traffic to her Web site spiked, but then the site was hacked and was frozen, Niknejad thinks, by the Iranian government. That's when she turned to Twitter and started relaying the information she was getting sentence by sentence.

The success has been double-edged; Tehran Bureau gets quoted now in the The New York Times and has become well-known and respected.

But Niknejad also knows her site is big enough now to be noticed by the Iranian government. She publishes most reports without bylines. And she constantly worries.

"Oh, I have nightmares every night, and I wake up several times just kind of gasping for air. I hope people are OK," she says.

Journalism was the furthest thing from Niknejad's mind when she emigrated from Iran, shortly after the revolution, at 17. She discovered it by accident when she fell into a job as a legal reporter after law school. Now, she says, reporting is her calling.

"This is what I have to do. It makes life meaningful for me."

In the past week, Niknejad has barely left her computer. She is completely disconnected from the suburban reality on the other side of her living room window.

"It's like a screen to me. It's like maybe a picture on the wall. What's happening here doesn't engage me anymore."

Then pointing to her laptop screen, Niknejad says, "to me — that's what's real right now."