Accessibility links
In '08 Interview, Quincy Jones Reflects On Jackson One of Michael Jackson's close friends and mentors was record producer Quincy Jones. In a 2008 interview with Michele Norris, Jones reflected on his relationship with the king of pop.

One of Michael Jackson's close friends and mentors was record producer Quincy Jones. In a 2008 interview with Michele Norris, Jones reflected on his relationship with the king of pop.

It's been 25 years since the release of "Thriller," which was the - really the culmination of a successful partnership between you and Michael Jackson. When you met him, you saw something in him that people thought that he was already at the peak of his career. But you said, no, no, I can take to him to new places.

Mr. QUINCY JONES (Music Producer): Yeah, a lot of people said that, you're right. And they said that's as big as he can get.

NORRIS: What did you see?

Mr. JONES: I saw a depth while watching him when we did "The Wiz." And Michael said, could you find me - I'm getting ready to do a solo album - could you help me find a producer? And while they were rehearsing, Michael's role, if you remember, he would pull out little pieces of paper from his chest - and he had the prosthetics on his face, it took five hours of makeup, and he'd pull out da-da-da-da-da-da-da, Confucius. Da-da-da-da-da, Kierkegaard or whatever. Then he said da-da-da-da-da-da-da, Socrates.

I said, who - Socrates? What is that? And he kept saying Socrates and nobody corrected him. The second day I was worried that it would become a habit so I went over and I said, Michael, it's Socrates.

Mr. JONES: Yeah. Ours is as close as it gets, you know.

NORRIS: It's difficult for me to ask you this, but Michael Jackson's life has become the fodder for tabloid fare on so many occasions. Has that been tough for you to watch?

Mr. JONES: Very. Very. You know, the prerequisite for preparing yourself for success, especially success that big, which is probably the biggest, biggest success that ever occurred in music ever in history - it is scary. And it hit me about a year or so - a year and a half after we put the record out. And I remember People Magazine did a cover without even an interview on Michael. The next week, they did another cover on Michael. The third week, they did another cover of Michael and dedicated the whole magazine to him.

At that time the album started to sell, like, a million-five a week, you know, it was just out of control. And that scared me a little bit because it's - then you can see how far it's going, you know. And then you worry that if everybody can keep their feet on the ground.

NORRIS: And it must be tough, though, as a producer, because if you do your job really well and lift someone to the highest heights of success, you're taking them to a place where the air can be really thin.

Mr. JONES: It is a thin. It's very thin. And - because two or three things happen: You think you deserve the success, which is a little off, or you think you don't deserve it, then you're fooling everybody.

SIEGEL: Our co-host Michele Norris speaking last year with music producer Quincy Jones about legendary singer Michael Jackson. Jones released a statement today. It says, I am absolutely devastated at this tragic and unexpected news. I've lost my little brother today and part of my soul has gone with him.

(Soundbite of song, "Don't Stop 'Til You Get Enough")

Photos From The Book 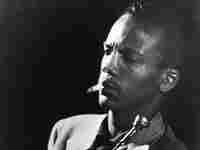 Fourteen-year-old Quincy Jones used a cigarette as a prop to get into nightclubs. Quincy Jones Productions. hide caption 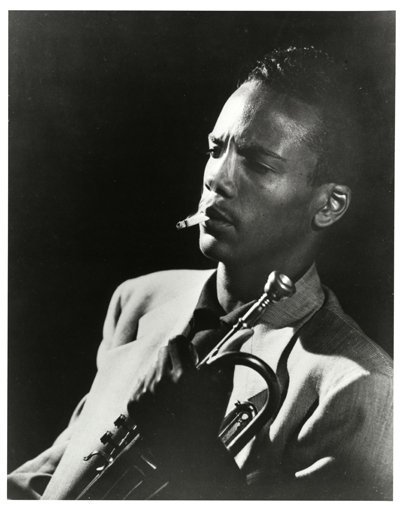 Fourteen-year-old Quincy Jones used a cigarette as a prop to get into nightclubs. 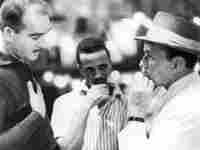 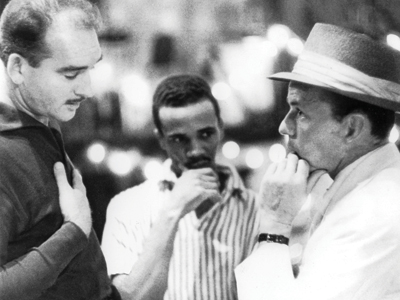 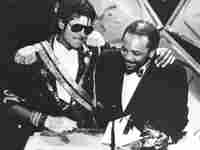 Quincy Jones with Michael Jackson at the Grammys in 1984. National Academy of Recording Arts and Sciences hide caption 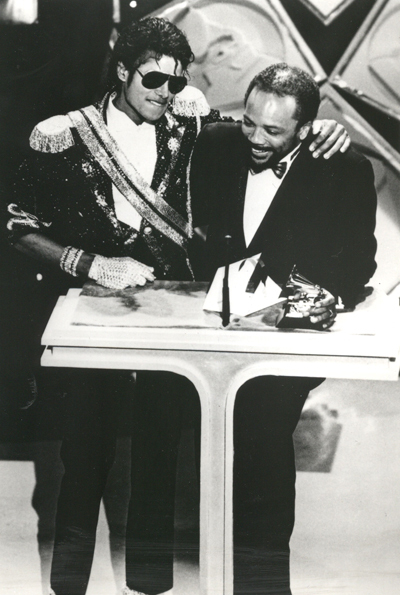 Quincy Jones with Michael Jackson at the Grammys in 1984.

You Don't Know What Love Is

Quincy Jones on his relationship with Michael Jackson 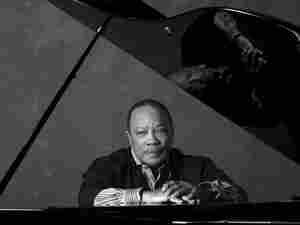 Quincy Jones — known as Q to his friends and a legend to the rest of us — went from performing and arranging to producing. As a record executive he churned out chart toppers. Always restless, he moved to producing films and TV shows in the 1960s and '70s. Through the '80s and '90s there were more hits: The Color Purple, Michael Jackson's blockbusters and humanitarian work in Africa. At 75, he's still keeping up a blistering pace.

Jones has worked with everyone in music at some point: Count Basie, Bruce Springsteen, Ella Fitzgerald, Frank Sinatra, Paul Simon, Sarah Vaughn, Ray Charles, Michael Jackson, Cyndi Lauper, Nat King Cole, Ice T — the list is a testament to the diversity and genius of his career. He has managed to be the coolest cat in the room for more than six decades. Jones' new book, The Complete Quincy Jones: My Journey and Passions, is not an average autobiography; he has already published one of those. It's more like a scrapbook filled with photos, ticket stubs, sheet music and memories.

Jones didn't start out on top. He says he grew up in Chicago in the heart of the ghetto, and back in the 1930s all he saw was gangsters with machine guns and stogies. "I wanted to be a gangster until I was 11," he says. After Al Capone's gang ran his family out of town, Jones eventually ended up in Seattle, where at 14 he met Ray Charles, who was only 16.

And Jones was only 15 when he met Lionel Hampton. The bandleader heard a piece of music Jones had written, called "Suite for the Four Winds." Hampton immediately hired Jones as a trumpeter and arranger, and Jones just jumped on Hampton's tour bus, without saying a word to anybody. Hampton's wife, Gladys, kicked him off the bus and told him to go back to his parents, but when he was 19 he joined up with Hampton's big band for real. "It was the most exciting, educational, learning experience I've had in my life," he says.

Jones continued his musical education at the Schillinger House of Music, which is now the Berklee College of Music. "My teacher said, 'Quincy, you're going to learn everything everybody ever did with the 12 notes, from Stravinsky to Elvin Bird to Duke Ellington — everybody,' " he says. "I spent 28 years to hone my craft so I could write any kind of music." And he learned from conducting and arranging for the greats, like Billy Eckstine and Peggy Lee. "In those days we didn't care about money or fame," he says. "We couldn't care less!"

With decades of experience and awards under his belt, Jones is an expert arranger. He says, "No. 1 is understanding the range of every instrument singularly, and then collectively. I look at everything I do in life — with my foundation, everything, business organizations, everything — like a big band: four trumpets, four trombones, five saxophones, a rhythm section of a piano, bass, drum, and guitar," he says. "I look at the whole world like that."

As an arranger for a singer, says Jones, he is above all trying to make the vocalist sing better than he or she ever has before. He thinks he has been so successful because he knows, as Frank Sinatra described it, how to push their buttons: "That certain major seventh note that you go to a minor seventh on — just certain things musically that I know that emotionally it turns them on, 'cause it turns me on too."

Sinatra himself bestowed Jones' nickname upon him. He called Jones from Kauai in 1964, saying, "Q! Would you consider doing an album with Basie and I?" Jones says he asked him if the pope was Catholic. Even with all the star power around him, Jones says he didn't feel any pressure once they began work; instead, he felt love and a part of something special. "We just loved working with each other," he says of Sinatra and Basie.

When asked how he keeps going and going, Jones says it's "probably from not having a mother." When he was very young his mother was in a mental home, and he says he was raised by a stepmother and some others. "If I probably had had a great family, who knows, I might have been a sad musician," he says.

With his deep and broad base of knowledge, Jones has been able to surf the crests of cool from generation to generation, style to style. He says it's natural, that it's just the way he is. "I like 360 people, 360 in every part of life. From food to love, to music to helping kids," he says.

Says Jones, "Sinatra used to say this every night: 'Q, live every day like it's your last, and one day you'll be right.' "