Accessibility links
Jackson Fans And Family Mourn His Death Fans around the world are mourning the loss of pop icon Michael Jackson, who died Thursday at the age of 50. Jackson was hoping for a comeback after years of personal and financial setbacks. An autopsy is scheduled for Friday. 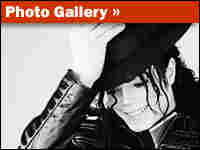 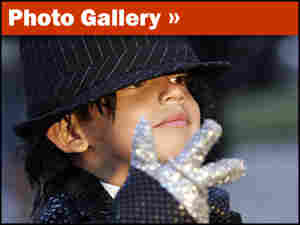 Fans of the pop star are mourning for him all over the world.

It all started with a 911 call coming from Michael Jackson's rented mansion in an exclusive section of West Los Angeles. Paramedics found him there not breathing, and apparently suffering from cardiac arrest. They quickly rushed him to the nearby UCLA Medical Center, but it was too late. Jackson died Thursday.

Jackson's brother Jermaine confirmed the news to a teeming gallery of reporters, saying, "A team of doctors, including emergency physicians and cardiologists, attempted to resuscitate him for a period of more than hour. But they were unsuccessful."

As TV news helicopters circled the hospital a huge crowd gathered outside, singing Jackson's hits and chanting his name. Tanya Blazer, a postal worker, heard about Jackson's collapse on the radio and rushed over. She said she parked her car and as she stepped out the crowd shouted that Jackson had died.

"And I just screamed," she says. "People stopped in the street because people heard it, and it was just like — people, everybody was in shock."

Keneedra Hubbard, visiting L.A. from Cincinnati, took her whole family to the Medical Center. She held up a handmade sign that read "Rest in peace, I love you Michael." "Thank you, Michael Jackson, for everything you stood for in life," she said. "He has touched the world. The world has lost."

Fans mourned not just the loss of the music they grew up with, but also the chance to ever hear Jacksonl perform again. He had been in Los Angeles rehearsing for his big comeback, what he said would be his last tour — 50 sold-out shows to begin in London next month. It was a chance to recover from his years of financial troubles and redeem his tattered personal life.

Jackson faced high-profile accusations of inappropriate contact with young boys, and in 2005 he was put on trial for molesting a 13-year-old cancer survivor at his Santa Barbara ranch, Neverland.

Tom Mesereau helped Jackson win acquittal in that trial and says the pop star was burdened by people who used him. "I think it caused a certain level of isolation and distrust on the part of someone who really just wanted to be a very very gentle, nice, kindhearted soul and have similar people around him," he says.

His financial problems continued, and Jackson contracted Darren Julien to auction his belongings earlier this year. But then the singer changed his mind and went to court to stop the sale. Out of all of Jackson's collectibles, Julien says he'll never forget the huge statues that filled Neverland. "He had over 100 life-size figures throughout the houses and the rooms and the game rooms," says Julien. "The sad part of it was that it kind of made us feel to some degree that he was lonely."

Today the L.A. County's coroner's office will try to learn more about the cause of Jackson's death. His autopsy is reportedly being expedited.

Jackson leaves behind a string of hits that may never be surpassed. At the hospital, Jermaine Jackson offered his brother a final prayer: "May Allah be with you Michael, always. Love you."