Accessibility links
Co-Op Option Offers Compromise In Health Debate As Senate and House committees negotiate a potential new health care system, the idea of insurance co-ops is gaining ground as an alternative to a government-run plan. The HealthPartners co-op in Minneapolis provides some insight into the ability of these plans to provide low-cost, high-quality care. 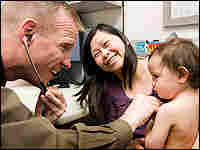 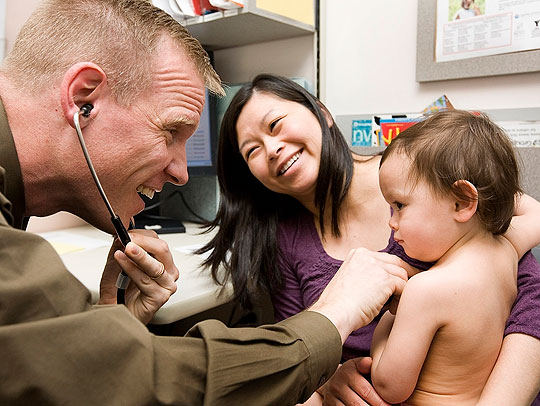 Dr. John Dunn, a pediatrician checks on a patient the Group Health Northshore Medical Center in Bothell, Washington. Group Health Cooperative is another co-op model Congress can use in the health bill debate.

A new health insurance idea is circulating through the Senate Finance Committee and may appear in its final plan for revamping the nation's health care system. The idea is to stimulate the creation of co-ops where people could go to buy low-cost, high-quality health insurance.

Health co-ops are not a new idea. Two large ones, Group Health in Seattle and HealthPartners in Minneapolis, are more than 50 years old. But the thought that co-ops could win enough support to keep health overhaul plans rolling along has only just come up.

The co-op idea is being pressed by Sen. Kent Conrad (D-ND). "I believe they're a good idea because they can provide competition to for-profit insurance companies, and one of the things we need in the system is more competition," he says.

Conrad is trying to deal with objections from the insurance industry, as well as from some health care providers and some Republicans, to something called a public option. This would be a government-run plan designed to nudge private insurers into lowering prices and make health insurance more widely available. Opponents are concerned the government plan would pay too little to doctors and hospitals and would drive private insurers out of business because they couldn't demand the same kind of deals from doctors and hospitals.

Health co-ops, says Conrad, "have some of the strengths of public option in that they are not for profit and will provide competition for the insurance companies. On the other hand, it meets some of the objections from others who don't want a government-run plan, because co-ops are membership-run and membership-controlled, not government-controlled."

George Fell is a member of HealthPartners, a 1.25 million-member health co-op in Minneapolis. He loves the plan. "I'm happy, my wife is happy, and we never thought of moving into any other program," he says.

With HealthPartners, members elect a board of directors, and the board appoints the CEO. Fell has been a member since 1982, but he hasn't voted yet. He says he'll start if the quality of care goes down, or the costs go up.

Several co-ops have failed because of tension between the board and health care providers such as doctors and hospitals. The providers wanted more money or autonomy or better facilities than the co-op was willing to provide. The relationship between doctors and HealthPartners appears to be good.

Family physician Art Wineman has been with HealthPartners since 1994, working in its HMO. "The nice thing about working here is we have the resources to support excellent patient care," he says. He likes the way HealthPartners collects data on how people are doing and gives him and the other doctors feedback on what works. "I also like the fact that being part of a group like this, I don't have to focus on profits," he says. "I can focus on what's good for the patient." The average family physician at HealthPartners made $185,000 last year, a little above the national average. He says the member-run board does a professional job of management.

Current CEO Mary Brainerd says she's very aware of whom she works for. "It's really clear to me whose interests I represent," she says. "It's not the interest of HealthPartners the institute. It's the interest of the consumer."

In 1999, people complained about long wait times to see a doctor, so HealthPartners started a program to reduce wait times. In three years, wait times came down from 18 days to four days. You can now get a same-day appointment in many cases.

HealthPartners has an appeals committee that board member Tom Brinsko says is the heart and soul of the board. He remembers when a couple filed an appeal a few years ago. They were trying to have a baby, and they had exhausted their plan's fertility benefits. "I'll just never forget how much they wanted a child," he says. The committee voted to ignore the contract limits and give the couple another chance.

Brainerd, the CEO, says as a co-op, HealthPartners is well-designed to hold down costs. Without the need to create the high profits that stockholders like to see, it has developed preventive care programs for diseases like diabetes, so people don't develop more serious problems. HealthPartners has invested in electronic medical records to make sure patients get the tests they need, not the tests they've already gotten. And by doing things like hiring most of the doctors and owning most of the hospitals where people get care, HealthPartners' administrative costs are half those of for-profit insurers.

Michael Tanner of the Cato Institute, a libertarian think tank, says, "There's nothing intrinsically wrong about co-ops, but there's no evidence that they would do anything to help our health care system." His concern is that legislation will create a de facto government-run plan, essentially a national co-op run and subsidized by the federal government.

But Conrad says his intention is to stimulate the development of health insurance co-ops owned and run by members, not by the government.