Accessibility links
On Set With Michael Jackson Peter Sagal once worked as an extra in a Michael Jackson music video. The video was "Remember the Time." The set was a version of ancient Egypt. The King of Pop entered in a gold costume. Then he started to dance.

On Set With Michael Jackson

On Set With Michael Jackson 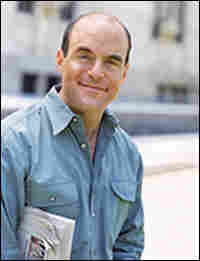 There's a line in my bio which I've come to understand over the years is pure anecdote bait: "Peter once worked as an extra in a Michael Jackson music video." Everybody envisions me all zombied up in the background of "Thriller," but come on, people: Those aren't extras. Those are zombies.

The video was "Remember the Time," and it was shot in 1992, directed by John Singleton. The story, such as it is, sends MJ back through time to a version of ancient Egypt ruled over by African-American luminaries: Eddie Murphy as the pharaoh, Imam as the queen, Magic Johnson as ... some kind of bare-chested announcer guy, I don't know. Via a friend who worked as a casting director, I was hired to be an extra in the marketplace scene, in which Michael — I call him Michael — flees (while singing and dancing, of course) from the pharaoh's guards. You can see the sequence, starting at about 4:44, here. You won't see me, though. I was on the set all day, in costume as the snake charmer, hanging around with the other extras, all of whom were — like me — actors, writers, directors, whatever, who had taken the job in order to meet Jackson, or Singleton, or just to be able to spend the rest of their lives telling a great story. However, the shoot went long, and they broke before shooting my "scene."

It was a remarkable day, though. We all were herded from holding pen to costume to makeup to holding pen to set, as the hours ticked by. The preparation for the marketplace scene, a few seconds of film, took hours, as the cinematographer and choreographer blocked out the sequence with a man who, I was told, was the foremost Michael Jackson dancing double in the industry. Finally, late in the afternoon, the doors to the sound stage swung open and something I can only describe as a pharaohnic procession marched in — there were videographers, bodyguards, attendants, aides, and in the midst of it, Michael himself, in resplendent costume, holding the hand of the most beautiful little girl I had ever seen. (Somebody told me it was his niece.)

Everyone treated him like royalty, of course, from the staring, grinning extras to the obsequious technicians to the deferential director. On the way out of the set, Michael decided to Greet his People, and started shaking hands with everyone. I didn't notice, at first, interested as I was in talking to Singleton, who was holding court in a corner. I noticed the people around me grow silent, and stare at something behind me. I turned, to find myself face to face with the King of Pop.

And then he was gone. I've told this story many times, and have always emphasized that even this early in his period of decline, he did seem more than a little crazy. (One of the makeup artists told me the crew had to sign a contract promising not to ever stare at him.) But the part I don't always tell is this:

Once he was on the set, once the entourage had departed to go hug the walls and wait, once the music was cued up on the playback system, once the camera was rolling, he stopped being Michael Jackson, lunatic king, and was once again just a performer. And man, was he good. I ran the length of the set, on the outside of the fake shop walls, so I could see the entirety of his dance riff, annoying the assistant director, who told me to get lost. I saw somebody who possessed, despite everything, an unearthly talent, and was possessed by it.

There's a lot of talk today about whether somebody so clearly damaged, and so morally indefensible — and yes, I do believe he was a pedophile, because in my opinion, people who are innocent of child molestation do not pay $20 million to people who accuse them of molesting their child (nor should people demand such a payment in return for such a crime, but that's another issue) — but let me tell you this, because I was there, and I saw it: The man could dance.