Accessibility links
'Bad': Jackson's New Album is Overproduced This review originally aired on Weekend Edition on September 6, 1987. In the ephemeral world of pop music, the five years between Thriller and it's follow-up, add up to light years. The musical question is whether Michael Jackson's star still shines. Is Bad the new album, bad or good? Milwaukee, Wisc. high school student and music reviewer Geylin Polivka says the album suffers from overproduction and an overuse of synthesizers. 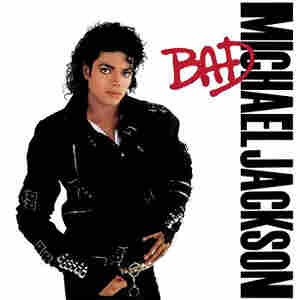 This review originally aired on Weekend Edition on September 6, 1987. Geylin Polivka was the author of a regular music column for the Tower Times the newspaper of White Fish Bay High School in Milwaukee, Wisc., where Polivka was then a senior.

In the ephemeral world of pop music, five years add up to light years. The musical question is whether Michael Jackson's star still shines. Is Bad the new album, bad or good?

A few years ago it seemed millions of Michael Jackson fans would do anything to hear one of the songs from their dynamic hero. Now, record executives might not be too sure. Five years is a long time to go between albums. People's musical tastes change along with musical trends.

Now we have Bad, the long-awaited follow up album to the mega smash record Thriller. Like Thriller, producer Quincy Jones was brought in to collaborate. But unlike Thriller, Jones goes overboard on production, saturating most of the album with layer after layer of synthesizer and drum programming. The horn arrangements, apparently thrown in for spontaneity, become predictable and out of context. It's truly a shame that Jackson's often soulful, unique voice must be buried by this heavy-handed production.

The song "Speed Demon" is a prime example of this problem: too much microchip wizardry, too little Michael Jackson.

On Thriller, Jackson wrote the two major hits, "Beat It" and "Billie Jean." Jackson writes everything except two songs on the new album. But this time, his songwriting is far from great. The love songs, most notably, "I Just Can't Stop Loving You" and "The Way You Make Me Feel" are syrupy and cliched.

However, this record is not completely void of merit: Michael's voice shines on the song "Liberian Girl." This time, the synthesizers add to Michael's voice rather than detract from it. It flows nicely and has atmosphere.

And just when you think Michael is taking himself too seriously, the song "Just Good Friends" kicks in.

But in the end, it seems Jackson has lost his independence. Producer Quincy Jones could have taken any other pop singer today and substituted him or her for Jackson on this album and it probably wouldn't have made a considerable difference. There's just too much synthesizer mumbo jumbo. Michael Jackson is a charismatic and talented performer, but unfortuneatly, Bad has more valley's than peaks.