Accessibility links
James Blackshaw: A One-Man Orchestra James Blackshaw is best known for his lush, symphonic compositions. His impressive technical virtuosity enables him to make his 12-string guitar sound like an entire orchestra. Blackshaw talks with Guy Raz about his musical style and his latest album, The Glass Bead Game. 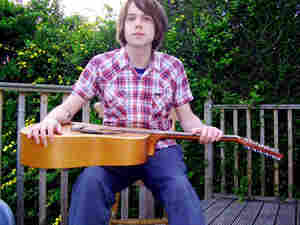 Twelve string guitarist James Blackshaw got his start in music by playing in a punk band. Lynda Smith hide caption

Recorded Live In Studio 4A

Listening to James Blackshaw perform, you would never guess that he got his start in music by playing in a punk band. The 12-string guitarist is best known for his lush, symphonic compositions. Blackshaw recently sat down with NPR's Guy Raz to talk about his musical style and his latest album, The Glass Bead Game.

Blackshaw is often likened to John Fahey for the experimental quality of his music, but the comparison only goes so far. Blackshaw cites a broad spectrum of influences, including American minimalism and liturgical music. It was his love for the latter that drew him to the 12-string.

"It was like an immediate shift in the way that I played," Blackshaw says. "The instrument really rings out."

His music seems to have a church-like quality. His guitar mimics an entire orchestra.

The lushness of his music is made possible by his impressive technical virtuosity. Blackshaw's playing style is physically demanding and at times painful. But he enjoys the challenge.

"There's so much rapid movement in my right hand that sometimes you do just sort of cramp up," Blackshaw says. "It's like running, and there's a point when it gets quite difficult. But if you go through that point then it becomes quite easy."

Blackshaw's music is uplifting, but he feels his best work is written when he is sad.

"I find it incredibly cathartic to write music," he says.

Contrary to what many believe, Blackshaw says that there is no cinematic element in his writing process. But he would like to try his hand at scoring a film -- a horror film, to be specific. However, it's unclear whether Blackshaw can make the 12-string sound scary.

"It's quite a sweet-sounding instrument," he says.