Accessibility links
In Jackson's Birthplace, Shock At Icon's Death The last few decades have not been easy on the city of Gary, Ind., just outside of Chicago. Crime and high unemployment plague the manufacturing city of less than 100-thousand. But even through the difficult times, Gary residents remained proud to live in the hometown of superstar Michael Jackson. 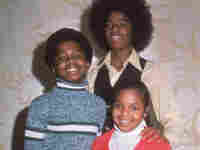 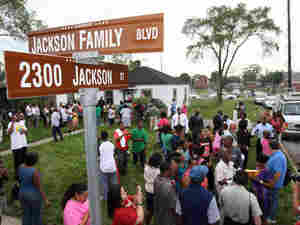 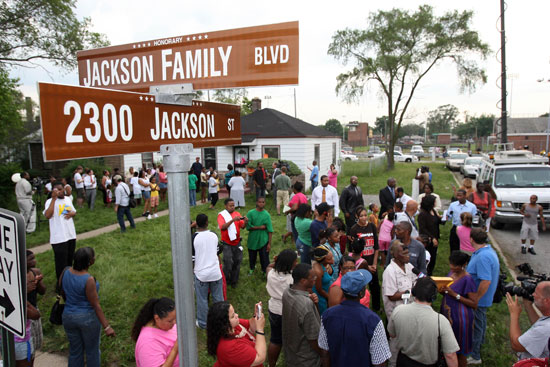 People gather around the childhood home of Michael Jackson in Gary, Ind.

The last few decades have not been easy on the city of Gary, Ind., just outside of Chicago. Crime and high unemployment plague the manufacturing city of less than 100-thousand. But even though the difficult times, Gary residents clung to one thing that made them proud: Being the hometown of superstar Michael Jackson.

That's not likely to change with Jackson's passing.

Jackson's death Thursday drew people from all around to his boyhood home at 2300 Jackson Street, named after President Andrew Jackson in Gary. Andrea Perlinsky came here even though it was her birthday./P>

"I didn't think on my birthday night I'd being doing this. I had to come," Perlinksky says.

The tiny, one-story white home has red trim, a black roof and little front yard. It sits at the corner of a now downtrodden neighborhood, a few blocks away from where the Jackson children attended elementary school. Jackson's death brought fans such as Perlinsky back to this spot to say good-bye.

"Young people, older people, we loved him so," Perlinsky says. "He transcended a lot of generations. He was just wonderful. He brought a lot to this town. He put us on the map."

As news broke of Jackson's death, dozens began surrounding the home in Gary, placing flowers, teddy bears and notes of condolences on the front step. For many here, this wasn't a mere passing of a celebrity but more like that of a family member. Mable Moore came to know Michael as a neighborhood kid.

"They used to practice right there in the house. You could hear them at night," Moore says.

Lasomia Hamblin, 44, remembers when Michael Jackson and his brothers triumphantly returned to the city to give a special concert at Gary's West Side High School in the early 1970s. There, Jackie, Tito, Marlon, Jermaine and Michael played all their big hits.

"I was little but I went. What a bad loss we had today," Hamblin says.

Remembering Jackson For His Music

Hamblin's older sister, Doris Jennings, remembers attending Garnett Elementary School with Jackson's older siblings. She too recalls the little brother who would grow up to outshine the rest. Some criticized Michael Jackson for not doing more to help his struggling hometown, but Jennings says that was unfair.

"They are going to remember him from his music and the things he did," Jennings says. "It wasn't about what he could do for the city because it's a lot of people who left here who didn't do nothing for the city. It's just him. The King of Pop."

Those personal connections to Jackson are common here. In fact, my late father, Jesus Puente, worked for a time at Inland Steel Company in neighboring East Chicago with Jackson's father, Joe, and would often come home telling stories about him.

The Jackson family moved out of Gary in the late 1960s, just as layoffs by U.S. Steel, the city's largest employer, began to take their toll.

Despite the city's challenges, mayor Rudy Clay, says people around the world knew Michael Jackson was from Gary.

"Wherever you went in the world, and you were from Gary, Ind., and you told [someone] you were from Gary, the first thing that came out of their month was, 'That's the home of Michael Jackson,'" Clay says. "So, that lifted our community and it also lifted you and it made you proud. Michael made us proud in Gary, Indiana. The world's greatest entertainer and nothing will take that away."

The mayor says there are discussions about creating a museum in the city to honor Michael Jackson and his family.