Accessibility links
Seattle Halts Use Of Soybean-Based Biofuels Ethanol and biodiesel were once touted as a green alternative to foreign oil. Now policymakers are questioning how much good biofuels actually do. A new report shows use of biodiesel may increase deforestation. 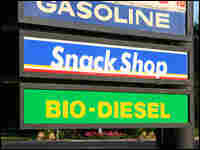 The main argument against biodiesel is that it increases demand for vegetable oils, which in turn may increase deforestation in soybean-growing countries such as Brazil. iStockphoto.com hide caption 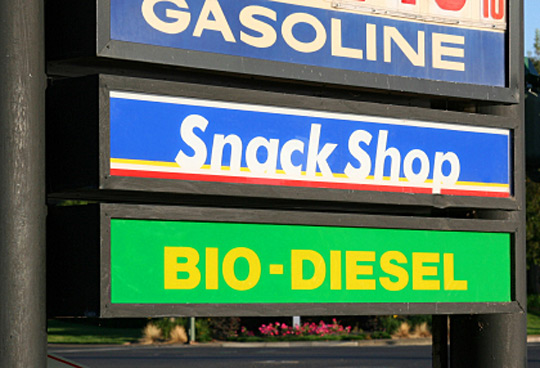 The main argument against biodiesel is that it increases demand for vegetable oils, which in turn may increase deforestation in soybean-growing countries such as Brazil.

There's one piece of America's climate-change strategy that's coming increasingly under fire: biofuels. Just a couple of years ago, ethanol and biodiesel were celebrated as homegrown alternatives to foreign oil. But now, not so much. Policymakers are starting to pay attention to long-standing criticisms of crop-based fuels, and even green-minded cities like Seattle are backing away.

Duff Badgley is the kind of hard-core environmental activist who loves making a nuisance of himself.

"I jumped on the stage, and I succeeded in handing [Seattle Mayor Greg Nickels] this warrant for his arrest," Badgley says. "And Nickels had time to look very startled before his big police guard grabbed me and dragged me off the stage."

Mayor Nickels is hardly an enemy of the environmental movement. Seattle city government is so green, the toilets in City Hall flush brown because they use recycled rainwater. But for people like Badgley, that's just window dressing — considering that the city has been running its trucks and other vehicles on soybean-based biodiesel.

"Biofuels are a global scourge," Badgley says. "They're rapidly ruining our livable planet."

The Impact Of Biofuels Abroad

The main rap against biodiesel is that it increases demand for vegetable oils. That, in turn, may increase deforestation in soybean-growing countries such as Brazil. It's a view that was reinforced in a recent report by the U.S. Environmental Protection Agency. That was enough to change the mind of Seattle City Council President Richard Conlin. This month, he got the city to stop buying soybean-based biodiesel.

"Decisions should be driven by science," Conlin says. "They shouldn't be based just on what feels good. Feeling good is great, but the science needs to be part of it as well."

The thing is, this science isn't really new. There's long been a legitimate debate over whether biofuels really reduce global warming gases. The two sides of the debate calculate things differently, and what's changed is that the skeptics' calculations are now getting more attention.

"It feels like our industry is being Swift-boated by our opponents," says John Plaza, who likens the situation to a political mugging. Plaza is the founder of Imperium Renewables, a Seattle-based biodiesel company.

On the wall behind Plaza is an autographed photo of Hillary Clinton, a souvenir from a happier time — when politicians vied for photo ops in Plaza's startup biodiesel distillery. Now the big new refinery on the Washington state coast sits idle: Imperium hasn't produced biodiesel since February. Plaza says demand has just dried up.

Plaza says companies like his want to move on to more sustainable crops, but they won't get that far if they can't count on local governments to buy the biodiesel they're making now. Last year, King County, where Seattle is located, also quit using biodiesel in its buses, and Washington state has failed to implement a requirement to mix biodiesel into the diesel supply. Now, with this new EPA report, Plaza is worried that federal support is eroding, too.

Seattle Looks At Other Options

In the city motor pool, Brenda Bauer, director of the Fleets and Facilities Department, says Seattle is not abandoning its dedication to alternative energy.

"We have to move away from petroleum," Bauer says. "We just have to."

She's already looking into biodiesel made from waste grease from food production. And in the meantime, there are other ways to stay on the alternative energy vanguard, such as using a hybrid car.

Seattle's Priuses are plugged into an outlet; a sign on the car advertises 100 miles per gallon. Actually, it's getting more like 55 mpg. But city officials aren't discouraged — by this, or the experience with biodiesel. To use less oil, they say, it is important to keep trying new things.