Accessibility links
On The Appalachian, Some Hike Off The Recession Whether recently laid off or just without any job prospects, some people have traded their resumes and interview suits for sleeping bags and hiking boots. They're on the Appalachian Trail for the next four months — and they hope that by the time they're off, the economy will have recovered. 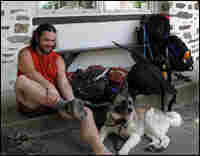 Chris Lee, "The Duder," and his dog, Donny, are hiking the trail in sections. Lee recently graduated from West Virginia University and hopes to find a job in journalism after his adventure. Ned Wharton/NPR hide caption

For the record, my friend Brad Wright is not a drug dealer. But his new nickname does suggest otherwise.

"My nickname is 'Pusher' because my friend said I looked like a drug dealer because I was carrying around a giant bag of ibuprofen and calcium supplements the first day," he says. "And I was offering them to everyone."

All thru-hikers on the Appalachian Trail eventually earn a nickname, whether on their first mile in Georgia or their last in Maine. And Pusher has logged more than 1,000 miles since March.

I joined him for a few days near Harpers Ferry, W.Va., to see if the recession has had any effect on who's making the journey this year.

Before he was "Pusher the Backpacker," my friend was "Brad Wright the Office Manager." He worked for a commercial real estate firm in Washington, D.C. When development slowed down last year, Wright grew bored and began plotting his adventure in the hills beyond his cubicle walls.

"I was the only one left in the office by the time I quit," he says.

After three months of lugging around his food, clothes and tent in a frame backpack, he's finally reached Harpers Ferry, the so-called psychological halfway point of the entire trail. The actual halfway point is roughly 75 miles north, but because Virginia is such a long and arduous state, making it across the state line is a feat worthy of celebration and some much-needed rest.

Most of that celebration happens at the Appalachian Trail Headquarters, which is based in Harpers Ferry. Thru-hikers often elect to take a day off here. Upon arrival, weary backpackers are directed to a back room where they can sip cold water, check e-mail, pick up packages and rest their feet on the electric massager. Hikers also get their pictures taken and those are placed in big, black binders that date back for decades. Not much has changed in all those years, except the gear and maybe the haircuts.

Another hiker has just arrived at the headquarters. Out here, he goes by "The Duder." His dog, Donny, stretches out beside him on the hot concrete. His leash is gnawed through and retied in places. The Duder examines Donny's paws and then leans back against his pack to sip on a frosty Gatorade.

"I don't see how people could get off for six months at a time," he tells me.

Off the trail, the Duder is actually Chris Lee, a 26-year-old recent graduate of West Virginia University. His dark, curly hair nearly reaches his sweat-stained orange tank top. The Duder is hiking the trail in sections. His girlfriend is supposed to pick him up soon.

He hasn't found a job yet but is interested in journalism, possibly in writing for outdoor magazines. That's why he sees this trip as something of a resume builder. But he adds that there's never a good reason to be hiking "senseless miles."

"I was talking to one old man one day, and he said this is hands-down the single most selfish act one person can do — leaving behind all your people to worry about you," he says.

People come to the trail for any number of reasons: to accomplish something physically daunting, to enjoy the natural world or just to get away from it all. But committing six months of your life to a project that can cost anywhere from $3,000 to $5,000 is a gutsy thing to do in a recession.

I meet one hiker who's taken a six-month leave of absence from her job as an environmental consultant in Atlanta. "Couscous" is 29-year-old Kim Morley. She admits she sometimes worries the job might not be there when she's finished her adventure.

"I send out e-mails from towns to a bunch of people and copy my boss," she says, "so they know where I am and that I should be done sometime in September and back."

And if her job no longer exists, she says, she'll figure something out.

For Rusty Towery, taking this much time away isn't difficult at all. Nicknamed "Wheeler," he was laid off in November from construction equipment manufacturer Caterpillar. He sees this as an amazing opportunity.

"I have no major responsibilities yet in life so [I] might as well do something like this while I can, instead of having to wait like the other half of the population on the trail," he says.

Wheeler is 26 years old. After being laid off last year, he worked a series of odd jobs to save up a little money. He also ran each day to build his endurance. He says his friends were a little jealous the day he left, even joking that they wished they'd been laid off, too.

One unexpected perk of his trip has been the chance to do a little networking. He might even have a job when he reaches Maine in September.

"I had a few things come about from the trail," he says. "Oddly enough, it's been pretty productive in that regard."

As for my friend Pusher, he tries not to think about the economy or what he'll do once he's finished. He's taking it one mile at a time, and he has a thousand more of those to go.

Before we part ways, we lower the bear bag with all his food from a tree limb, and he packs up his tent in the early morning sunlight. He has this all down to a science and can recite the weight of almost every item in his pack. Like all hikers, he's shed the unessential gear.

"It was good seeing you," he says and climbs the hill to the trail — off into unknown territory.

Watch A Video About Hiking The Appalachian Trail During The Recession