Accessibility links
Figuring Michael Jackson's Estate A Complex Task As authorities look deeper into the cause of Michael Jackson's death, financial experts will be trying to determine the value of his estate, which was weighed down by massive debts. So it will likely take some time to untangle Jackson's complex financial affairs. 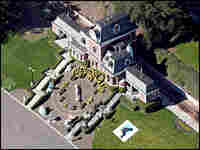 Michael Jackson bought a ranch in Santa Barbara, Calif., in 1988, and turned it into Neverland, an amusement park built to his personal tastes. It is a part of his overall estate. Reports say that Jackson was more than $400 million in debt. Armando Aroriyo/epa/Corbis hide caption 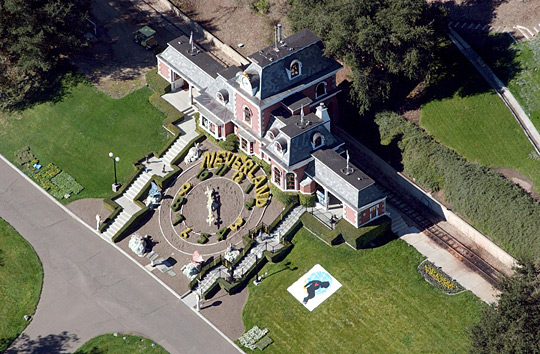 Michael Jackson bought a ranch in Santa Barbara, Calif., in 1988, and turned it into Neverland, an amusement park built to his personal tastes. It is a part of his overall estate. Reports say that Jackson was more than $400 million in debt.

Michael Jackson is No. 1 on the charts all over again this weekend. Since his death on Thursday afternoon, Amazon, the online retailer, has announced they sold out of his music in minutes. Part of the sales will go to his estate, but perhaps not. Reports say Jackson was more than $400 million in debt.

Matthew Miller, senior editor for Forbes magazine, which publishes a list of celebrities whose earnings continue long after they're dead, says Jackson has the same potential as another Forbes dead celeb high-earner.

"Take for example Elvis Presley," Miller says. "Elvis left behind a massive catalogue of songs, a working estate at Graceland. He had movies, he had memorabilia, and all of that stuff continues to be bought and sold."

And every time Jackson's songs are bought and sold legally, his estate will be making money too, someday. But it will have to settle some debts first. Because, Miller says, Jackson was living like a lot of Americans — only with more zeroes.

"When you spend like a billionaire but you only have the assets of a millionaire, which is what Michael Jackson essentially did, you're going to run into cash-flow problems," he says.

In 1985, Jackson paid more than $47 million for ATV music — a company that held the rights to hundreds of songs written by the Beatles. He eventually merged it with Sony, and that should have kept him financially secure for life.

But he bought a ranch in Santa Barbara in 1988, and turned it into Neverland, an amusement park built to his personal tastes. Over the years, Jackson also was sued multiple times. He spent millions on out-of-court settlements.

J. Duross O'Bryan, a forensic accountant, was called in by prosecutors to examine Jackson's finances in a 2005 child molestation trial. Jackson was acquitted. O'Bryan said Neverland was a black hole of financial need. There were fleets of vehicles, scores of staff and exotic animals.

"So it wasn't just a mortgage payment. It was a substantial amount. It's almost like running an entire resort operation," O'Bryan says.

Jackson borrowed heavily against his profitable music catalogue, O'Bryan says. It earned lots — but not for the superstar.

"Even though it was paying a substantial amount of money, most of it was just going back to Sony for his share of the advances being made to him," O'Bryan says.

Touring would have eased the financial pressure on Jackson considerably, but he'd become skittish about concert performances. The fact that he'd agreed to do 50 of them in London starting in July is an indication of his dire financial straits.

And the trouble doesn't end with his death. Andy Katzenstein is a prominent attorney whose expertise is in planning and estate management for what he diplomatically calls "high-net-worth clients." He says figuring out what Jackson is earning posthumously is going to be a headache.

"When you're in the music world, there are performers royalties, mechanical royalties, writers royalties. You have to deal with EMI and BMI and all the tracking services," Katzenstein says.

Then there are the myriad businesses Jackson ended up owing, and support for his three children by two different mothers.

So even though there may eventually be plenty of money from his songs and videos, it will take some time to untangle Jackson's complex financial affairs.

"In this particular case, I see this one going on for years," Katzenstein says.

We incorrectly said that NPR makes a payment every time a brief piece of music is played in a news story. In fact, fair use rules permit the journalistic use of short pieces of music in news stories without any payment being made.