Accessibility links
Africans Mourn Michael Jackson's Death In Dakar, Senegal, the reaction to the news of Michael Jackson's death spread quickly. Dakar was the first stop on Jackson's tour of Africa when he was with the Jackson 5.

In Dakar, Senegal, the reaction to the news of Michael Jackson's death spread quickly. Dakar was the first stop on Jackson's tour of Africa when he was with the Jackson 5.

NPR's Ofeibea Quist-Arcton met him briefly during an Ivory Coast visit in the early 1990s. And she sent us this postcard from her current base in Senegal, the first African country Jackson visited as part of the Jackson 5.

OFEIBEA QUIST-ARCTON: The Senegalese love to dance and to make music. And right there at the airport in Dakar in 1974, drummers and dancers greeted the Jackson 5 as they stepped off the plane. The performance clearly inspired the 15-year-old Michael Jackson. He spoke about it in this vintage video posted on YouTube.

Mr. JACKSON: I love the way, you know, they do their different dances.

QUIST-ARCTON: It didn't take Jackson long to join in the vigorous Senegalese dancing. That's the Michael Jackson Africa will remember, a musical genius with dazzling dance steps. My encounter with him was almost 20 years later in 1992 in Ivory Coast. Jackson was to be crowned a traditional chief. Now being a diehard Jackson 5 follower during my teeny-bop years, and now a journalist, I was as excited as his Ivorian fans about the visit. But it wasn't quite what we've expected. Jackson appeared to hold his nose as he stepped off the plane in Abidjan, proceeded to ignore the assembled VIPs and zoomed off in his limousine. Later, I managed to ask him just one question. How do you like Ivory Coast? The reply in this tiny, tiny voice was, beautiful. I love it. My foreword exclusive with Michael Jackson.

QUIST-ARCTON: But back here in Dakar, let me leave the last word to this young Senegalese singer who was in the middle of a sound check on stage yesterday but stopped to speak about the lasting influence of one of his heroes.

Mr. BADA FREDDIE(ph) (Singer): My name is Bada Freddie. I'm representing Daraje(ph) family. About Michael Jackson, yeah, it's a great loss because just like any youth on the earth, you know, Michael Jackson, I used to watch him dancing and singing since I was a kid. Just like a part of me is gone.

QUIST-ARCTON: And what's your favorite Michael Jackson song? Will you sing it for us? 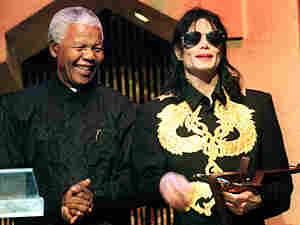 Michael Jackson's fame stretched around the world. In Africa, he was a legend and an inspiration. NPR's Africa correspondent Ofeibea Quist-Arcton remembers meeting Jackson when he visited Ivory Coast in 1992. She told Michel Martin that Africans all across the continent are mourning the loss.

Quist-Arcton also wrote about her experiences for NPR.org.

Remember, this is a long-time Jackson 5 follower and fan-turned-reporter writing, born in the same year and month as Michael Jackson, August 1958. So I cannot claim to be detached. At age 12 or 13, I would lustily sing along to Michael Jackson and co. — be it "Ben," "Rockin' Robin," "I'll be There," "ABC," all their hits. I was a quintessential teenybopper, and grew up with the Jacksons' music.

And what about those 'fros? We were just so envious of the Jackson boys' impeccable hairdos. They were so groovy.

So when I heard in 1992 that Michael Jackson was coming to Africa — I was by then a correspondent based in Abidjan, the commercial capital of Ivory Coast — I was as excited as his thousands of fans.

Jackson was having a singular honor bestowed on him, being enstooled (the equivalent of being crowned) a traditional chief of the Agni people in the southeastern village of Krinjabo, near Ivory Coast's border with neighboring Ghana.

I was at the airport, with a posse of other journalists. Government ministers were lined up on the tarmac at the foot of the plane, waiting for the musical genius to step off the aircraft. Thousands of expectant fans thronged the main thoroughfare all the way from the airport downtown.

Everyone was waiting to say "Akwaaba" — welcome. But I remember we were left open-mouthed when Jackson appeared to hold his nose as he stepped off the plane, ran down and as good as ignored the VIPs waiting to greet him. He sprinted past them and into the waiting limousine to whisk him into town and his 5-star hotel.

That was not the welcome anyone had expected. We were perplexed and somewhat bewildered. Such bizarre behavior was not what we had come to expect from this global musical hero and superstar.

The unexplained and unfriendly nose-holding incident attracted some unfavorable reactions in the local media. But everyone seemed ready to forgive Jackson, if only he would come down from his turreted hideout at the hotel and talk to his admirers.

We finally got to meet the man — well, I say "meet," but it was more like a long glimpse after waiting and waiting and waiting. And I managed to get a four-word exclusive with Michael Jackson — on mic and on the record. That was after I thrust my microphone through a crack in the open window of the limo and shouted out: "How's your visit to Ivory Coast? How do you like Africa?"

We were thrilled. A group of my journalist colleagues and I gathered around my cassette recorder afterwards to check whether he had said anything.

The reply could not have been shorter, and it came in a tiny-weeny speaking voice from the man with the powerful falsetto singing voice. "Beautiful, I love it."

Jackson looked much happier in Krinjabo, in a village setting, where he was wrapped in a gorgeously colored, toga-style hand-woven kita (kente) cloth. He sat on a golden stool, beneath the sacred tree, and allowed fellow chiefs to place a black crown with golden adornments upon his head. The joy was reciprocated, and you had to fight to get a birdseye view to witness the ceremony on his flying visit.

The promised cultural center has yet to be built, locals report. But Ivorians who witnessed the ceremony forever treasure the memory of Michael Jackson.

Remarking on an earlier visit to Senegal, when he was still a teenager and the lead singer of the Jackson 5, he told Ebony magazine: "The drums and sounds filled the air with rhythm. I was going crazy, I was screaming, 'All right! They got the rhythm ... This is it. This is where I come from. The origin.'"

Many Africans are deeply sorrowful about his passing. Most seem to agree that he was only human and, like other human beings, had his faults, trials and tribulations. In radio, television, print and email reactions to his death that I monitored from all over the continent, compassion and distress were the main emotions.

A Kenyan woman, with a tremor in her voice, asked how a legend dared die, because they were not supposed to die.

Across the continent in West Africa, a Nigerian radio host reportedly broke down live on air. In Ghana, one woman burst out crying, sobbing inconsolably when she heard the news of his death.

Jackson also had African critics, who pointed to the troubled Michael Jackson and continued to ask questions about the changes in his skin color and the shape of his nose. They concluded that, for a man who appeared to have everything — fame and fortune and unparallelled musical talent — he was not proud to be an African American, and a beautiful black man, and that he wanted to be white.

But, mostly, Africans are mourning the man whose dazzling dance steps and musical genius are likely to be Jackson's lasting legacy on this continent.