Don't Let Me Be Misunderstood 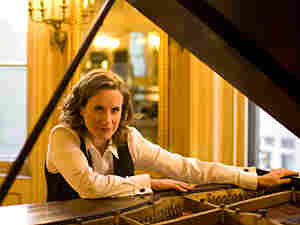 Susan Werner first appeared on Weekend Edition in 1999. At the time, she had recently released her album Time Between Trains, and she played a selection of those songs on guitar and piano. But in the 10 years since, she's become something of a musical shape-shifter.

Werner has released a recording of original songs written in the style of George Gershwin and Cole Porter called I Can't Be New. She cut another album of original songs delivered in a gospel style (but from a skeptical perspective) called The Gospel Truth.

Now, Susan Werner has taken pop songs by others and written chamber music settings for them. Cat Steven's "The Wind" is given a Bach-esque treatment. Bob Marley's "Waiting In Vain" rings with echoes of Erik Satie. Stevie Wonder gets mashed up with Chopin-inspired arrangements. Seven other such tracks appear on her new album Classics.

"We chose songs that had a certain lyrical elegance to them, and a certain structural formality," Werner says. "That is most beautifully revealed when you strip it down to its very basic elements. And there's no hiding behind a string quartet."

In an interview with host Liane Hansen, Werner said that she chose songs that had lyrical weight and thoughtfulness to them, such that the music would be taken seriously.

"It's so easy, when you get near classical music, to do something funny," she says. "I mean, once you think about the Bugs Bunny cartoons, oh my God, right? You have to be careful not to do something that has everybody in stitches."

To hear the full interview with Susan Werner, click the link at the top of the page starting around noon ET on June 28.