Accessibility links
Brother Ali: Hip-Hop from a Unique Perspective On his latest album, Brother Ali raps about being discriminated against, about being poor and about finally having success in the hip-hop world. Though the themes are familiar, they're coming from a different place than you might suspect. 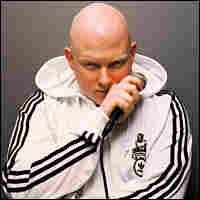 Brother Ali says he was inspired to become a musician by the people at his label, Rhymesayers. hide caption

On his latest album, The Undisputed Truth, Brother Ali raps about being discriminated against, about being poor and about finally having success in the hip-hop world. Though the themes may be familiar, they come from an unusual perspective.

Brother Ali is a minority, but not in the ways you might expect. First, he's a white rapper in a genre filled with mostly black artists. Second, Brother Ali is an albino.

Ali, who was born Jason Newman, converted to Islam when he was 15. He says that he felt like an outsider among white people, and has never identified with the word "white."

"I was taken in, early on, by black folks," he says. "Those are the people who taught me the things that I needed to know to survive being who and what I am." His album was released in April.