Accessibility links
Tunnel to Terminus: The Story of Penn Station In her new book, Conquering Gotham, historian Jill Jonnes documents the drama behind the construction of New York City's old Penn Station. She gathers a cast of corporate leaders, corrupt politicians and daring engineers who brought the station to life in 1910.

Listen
Tunnel to Terminus: The Story of Penn Station 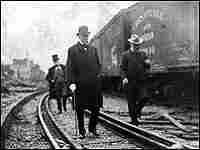 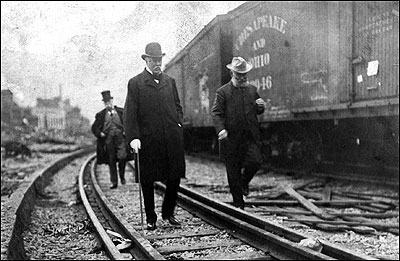 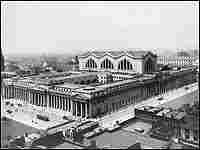 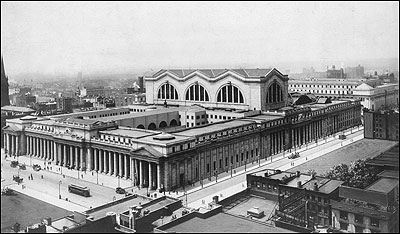 New York's Pennsylvania Station just before it opened in 1910.

When the grand concourses of New York City's old Pennsylvania Station were demolished in 1963, the remnants of a mammoth subterranean project were swept away, too.

The story behind Penn Station — and the tunnels that connected New Jersey with water-locked Gotham — was a high-stakes drama that pitted the nation's greatest corporation against the forces of Tammany New York, America's richest city and most important port.

In her new history of the project, Conquering Gotham: A Gilded Age Epic: The Construction of Penn Station and its Tunnels, author and historian Jill Jonnes gathers the cast of corporate leaders, corrupt politicians and daring engineers who brought the station to life in 1910.

In the 1890s, Pennsylvania Railroad passengers boarded ferries in New Jersey to travel to New York. Alexander Cassatt, president of the railroad, was determined to run his trains directly into Manhattan. Operating in an era of lightly regulated capitalism, Cassatt wielded substantial power and managed to outwit Tammany Hall politicians in the fight for the franchise.

But creating the tunnels under the force of two crushing rivers would be a treacherous job. Jonnes details the heroic feats of engineers and "sand hog" laborers as they burrowed through soil. 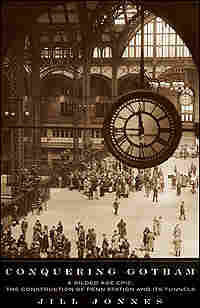 Alexander J. Cassatt, president of the Pennsylvania Railroad, arose from the plush chair in his Pullman Palace car sitting room, checking the time on his gold pocket watch. The train was slowing, approaching the railroad's Jersey City station and ferry depot, and billows of steam smoke floated past. The black porter and chef bustled about, the aroma of good coffee lingered, and Tiffany lamps set the polished wood paneling aglow. Cassatt, well over six feet tall, wore a dark old-fashioned frock coat, vest, starched white high-collar shirt, and cravat. As he and several of his PRR officers debarked onto the platform, they were enveloped by the sooty clangor of their road's Jersey City Exchange Place Terminal. On this morning late in May 1901, the men strode briskly, joining the impatient tide of travelers and commuters in the new depot, which, with its cavernous, arched glass-ceilinged train shed, rebuilt after a bad fire, had been hailed by the New-York Tribune as "one of the handsomest and most commodious in the world."

Uniformed porters maneuvered steamer trunks and valises, while a sea of dark-suited men sporting derbies and young women in Gibson-style shirtwaists and broad-brimmed hats hurried to board one of the railroad's double-decker ferries, huge rumbling boats bound for Manhattan. On the lower decks, one could see and smell horses pulling express wagons and drays up the gangways, jostling into place. On the upper deck, the reek of locomotive coal smoke gave way to the pungent scent of the river. The gigantic ferries named for the road's far-flung empire—the Philadelphia, the Pittsburgh, the St. Louis—were painted a signature Tuscan red, and emblazoned with the PRR's proud keystone crest. As the commuter throng pressed onto the Cortlandt Street ferry, a sign admonished passengers: "Gentlemen will not, others must not, spit on the floor." The freshening river breezes riffled Cassatt's thinning sandy hair and drooping mustache as he angled to the front of the open deck, his intelligent blue-gray eyes calmly sizing things up. Cassatt's aura of authority was tempered by a laconic reserve, a slight stoop, and hint of melancholy. Little known to the general public, Alexander J. Cassatt had long been viewed by his peers as the "most brilliant railroad official in this country." With American railroads at the apogee of their importance and influence—the mightiest, and in some circles, most despised economic force in the nation—this was no small accolade. Cassatt, a veteran engineer and executive of immense talent, had reluctantly emerged two years earlier, in 1899, from seventeen years of pleasant retirement to take charge of the Pennsylvania Railroad, thus becoming one of the most powerful men in the United States.

All about him was the luminous briny river air and ahead a wondrous sweep of sky and currents. Yet the very bodies of glistening water that encircled Manhattan and made the port city so rich were now starting to strangle her rambunctious growth. In 1901, only one major bridge, that marvel of grace and engineering, the Brooklyn Bridge, connected Manhattan to any other piece of land. Only one railway, the Vanderbilts' New York Central Railroad, came directly into Manhattan, and that from upstate. The New York Central ran down the east bank of the Hudson River, across the narrow Harlem River, and into the heart of Gotham. For many decades, sole ownership of this wonderful monopoly had made the Vanderbilts America's richest family, notorious for their churlish indifference to the well-being of their road's passengers. The late, large William H. Vanderbilt—his mausoleum still guarded by Pinkertons around the clock against grave robbers—had summed it up neatly with his infamously imperious, "Let the public be damned."

The other ten railroads serving New York, the world's greatest port as well as the nation's colossus of trade, finance, manufacturing, and culture, had had no choice but to build sprawling waterfront terminals on the industrialized New Jersey shore and to operate fleets of ferries across to Gotham. In typical corporate understatement, the PRR's official historians noted that "The Pennsylvania, as the Central's greatest rival, could not view this situation complacently."

Alexander Cassatt found these ferry rides a galling reminder that, unlike its nemesis, the Central, the Pennsylvania Railroad, which prided itself on being the nation's largest, richest and best-operated road, still had no way to bring its trains into the commercial heart of the nation's busiest seaport. Easy access to Gotham was arguably as important in the twentieth century as had been the building of the transcontinental railroad in the 1860s or the great interoceanic canal now being proposed to cross the Isthmus of Panama. And yet, astonishingly, there was no definite plan. No bridge or tunnel of the magnitude needed to span the Hudson River had ever been built. But Cassatt could now console himself that he and his great corporation were actively considering building the gargantuan North River Bridge, the long-promoted solution of engineer Gustav Lindenthal and what would be the biggest bridge in the world. As Cassatt had confided to General William J. Sewell the previous spring, "We are now taking up the question of the construction of the bridge seriously."

British policeman James Bryce had been stunned by the princely power and influence of American railroads and the men—"potentates"—who ran them, writing in 1888, "These railway kings are among the greatest men, perhaps I may say are the greatest men, in America...They have power, more power—that is, more opportunity of making their personal will prevail—than perhaps any one in political life, except the President and the Speaker." By 1900, the 185,000 miles of American rails equaled those of the whole rest of the world combined.

Alexander Cassatt, as the seventh president in the history of the Pennsylvania Railroad, intended to wield his corporate power to accomplish what no other man had yet done: He would somehow send the Pennsylvania Railroad across the mile-wide Hudson River and bring its elegant gleaming passenger trains triumphantly into the heart of Manhattan. "We stand on our last railroad tie within view of [Gotham] and cannot reach it," he said in frustration. "We must find a way to cross." He also intended to redress, some might say avenge, some long-festering corporate wrongs. 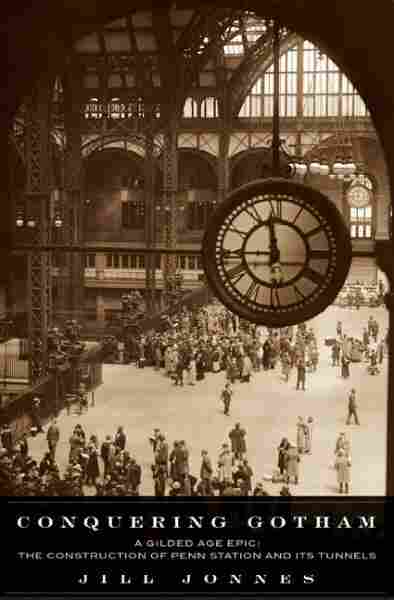 A Gilded Age Epic: The Construction of Penn Station And Its Tunnels