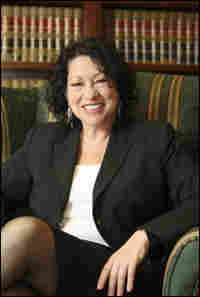 The 5-4 ruling means that the federal appeals court opinion on the New Haven firefighters that was endorsed by Supreme Court nominee Sonia Sotomayor (above) will not stand. Getty Images hide caption 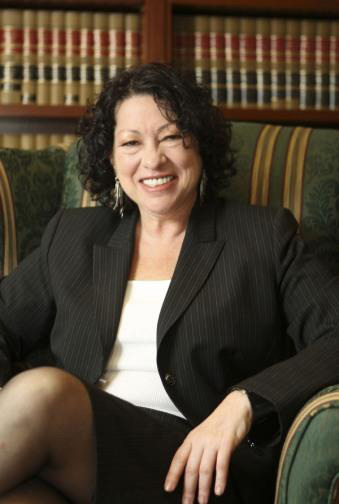 The 5-4 ruling means that the federal appeals court opinion on the New Haven firefighters that was endorsed by Supreme Court nominee Sonia Sotomayor (above) will not stand.

The Two-Way: Analysis: Sotomayor Was 'Following The Precedent' In Firefighters Case
Political Junkie: Political Fallout Over Ricci Decision On Sotomayor?

The city of New Haven, Conn., violated the rights of 20 firefighters when it threw out a promotion exam because too many whites and not enough minorities qualified, the Supreme Court ruled Monday, reversing a decision by an appellate panel that included high court nominee Sonia Sotomayor.

The justices decided in a 5-4 vote that the city's action violated Title VII of the Civil Rights Act of 1964, which prohibits discrimination on the basis of race, color, religion, sex or national origin.

The justices also said the city failed to demonstrate its primary argument for invalidating the test — that certifying the results would result in unintentional injury to minority firefighters.

"Fear of litigation alone cannot justify an employer's reliance on race to the detriment of individuals who passed the examinations and qualified for promotions," Justice Anthony Kennedy wrote in the majority's opinion. Chief Justice John Roberts and Justices Samuel Alito, Antonin Scalia and Clarence Thomas joined in the majority opinion.

In dissent, Justice Ruth Bader Ginsburg said the white firefighters "understandably attract this court's sympathy. But they had no vested right to promotion. Nor have other persons received promotions in preference to them."

Justices Stephen Breyer, David Souter and John Paul Stevens signed on to Ginsburg's dissent, which she read aloud in court.

Kennedy's opinion made only passing reference to the work of Sotomayor and the other two judges on the 2nd U.S. Circuit Court of Appeals who upheld a lower court ruling in favor of New Haven.

After the decision, New Haven Mayor John DeStefano Jr. said everyone involved in the case was acting in good faith — but the city's decision to invalidate the test results was based on 40 years of litigation involving promotion exams.

He referred to retiring Justice Souter's remarks during oral arguments in the case, saying New Haven was in a no-win situation.

"At this moment I must admit that I well recall Justice Souter's comment from the oral argument that the city found itself in a 'damned if you do, damned if you don't situation,' " DeStefano said.

DeStefano said both groups — the minority and the white firefighters — are seeking a system that is fair, and he concurred with Scalia and Ginsburg that the issue is likely to be before the court again.

"It's phenomenal that everybody stepped forward and took this position because the exams were valid, and if you work hard you can succeed in America," he said.

The court also released other decisions in the last day of its term before the summer break and the last workday for Souter. In other actions:

• The court issued an order that arguments will be heard Sept. 9 to decide whether the 90-minute film Hillary: The Movie, produced by a conservative political group, should be considered a documentary or a long political advertisement.

Citizens United made the film, which is critical of Clinton, when Clinton was running for the Democratic presidential nomination. The group wanted to make the film available to cable subscribers on demand without complying with federal campaign laws. It also wanted to run ads for the movie.

• The justices refused to hear a Hollywood complaint against a new digital video recording system. The justices said they will not disturb a federal appeals court ruling that Cablevision Systems Corp.'s remote-storage DVR does not violate copyright laws.

For consumers, the action means that Cablevision and perhaps other cable system operators soon will be able to offer DVR service without the need for a box in their homes. The remote-storage unit exists on computer servers maintained by a cable provider.

• The court ruled that New York state can investigate national banks for discriminatory lending practices and other violations if a court issues subpoenas.

The case stems from a New York case in which the state's attorney general was investigating whether national banks were offering lower mortgage rates to whites than to black and Hispanic borrowers. The attorney general requested more information from those banks, including Citibank, JPMorgan Chase and Wells Fargo, but the banks went to court to block the request. They argued that since they were subject to federal law, branch banks were not subject to state lending laws.

The case resulted in a lawsuit supported by 49 states, arguing that only they have the resources to adequately enforce consumer protection laws.

• The justices refused to hear a case involving the state of Missouri's attempt to bar protests near funerals. The state enacted the law aimed at members of the Westboro Baptist Church in Topeka, Kan., who regularly picket the funerals of military service members killed in Iraq and Afghanistan. They claim God allows soldiers to be killed as punishment for the country's sins.

• The court also refused to hear a case involving a school district that is blocking a group of Christian students from forming a campus-based Bible club.

The case stems from a 2001 lawsuit filed by students who wanted to form the Truth Bible Club at Kentridge High School in Washington. The Kent School District blocked formation of the club by refusing to charter it.