Accessibility links
Adventures In The Art World: 'American Painter' Assistant to a celebrity painter, whom she also sleeps with, Emma has stopped making her own art. Written by Jeff Koons' former assistant, The American Painter Emma Dial is a riveting inquiry into the creative impulse and a knowing portrait of the art world. 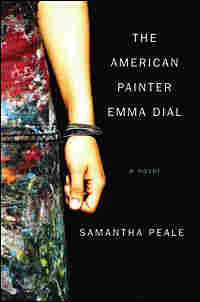 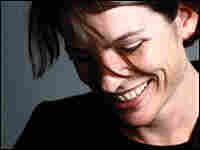 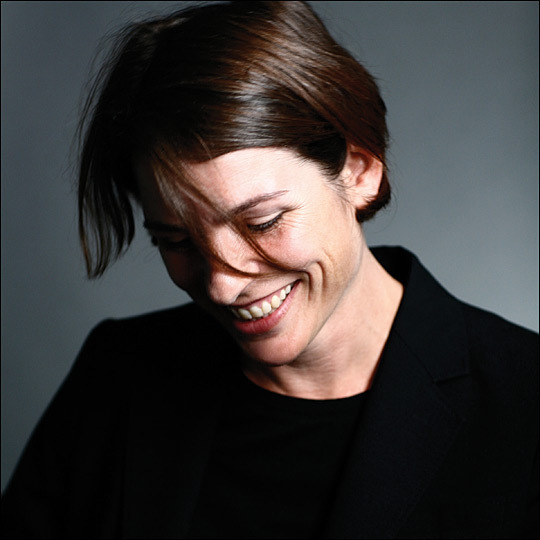 Young artists often mistake proximity to the art world for the act of creation itself. Nowhere is this error more common than in New York City, where being able to paint and make rent is a question of finding "the right imbalance" between art and paying work. So says the disarmingly candid narrator of Samantha Peale's first novel, The American Painter Emma Dial, who is not following her own advice. Emma, in the employ of a critically acclaimed painter, hasn't visited her studio in a year. Her self-loathing is palpable; the prose vibrates with the heat of her disgust. (The author herself served as a studio assistant to Jeff Koons — the controversial "King of Kitsch" — and would have had the opportunity to witness this creative trap first-hand.)

As the book opens, Emma perches "like a pet bird" on scaffolding, tweaking a painting for customers of the celebrity artist Michael Freiburg, at his instruction. For seven years, Emma has served as Freiburg's assistant, making all of his art according to his elaborate directions and sleeping with him so that "I would be able to paint more the way he wanted me to."

From a less original writer, this relationship would be far too loaded — a plot device placed in service of a feminist agenda. But Peale doesn't allow her protagonist to wallow in self-pity. Emma, having made the bargain, is matter-of-fact and even a little cynical about it. Her bluntness about the arrangement and its deadening effect on her own art, about her yearning to refocus and the unlikelihood that she actually will, creates a strangely exciting tension around a fairly mundane question: Will she or won't she paint something of her own?

Michael himself doesn't so much as pick up a brush, and claims not to miss it. His ability to divorce conception from implementation — from the feeling of mixing a color and standing before a blank canvas — mystifies Emma. "I could not locate where the excitement was for Michael," she says, "why it was paintings and not something else. This bothered me for a long time until I decided it did not matter. It was a job."

When Michael's friend and rival Phillip Cleary, an art-school idol of Emma's, turns his attention on her and starts referring to her boss's work as Emma's own — "That's you and me side by side," Cleary says, showing her a catalog in which one of Michael's paintings hangs beside his — she is consumed with longing, both sexual and artistic. The more she sees of Cleary, the more difficult it becomes to tolerate Michael. Yet the infatuation poses the danger that Emma will simply wind up in thrall to another great man.

Emma's musings about herself, her boss and the shallow business-, theory- and networking-obsessed world they move in, recall in their frankness and clarity the gimlet-eyed Kate Christensen, whose first novel, In the Drink, depicts an aimless young woman ghost-writing a memoir for a socialite, and whose more recent book, The Great Man, exposes the superficiality of the art world by depicting dueling biographers of a now-dead male artist who fail to recognize his less famous sister as the real talent.

While Peale's work lacks the layered complexity of Christensen's best work, The American Painter Emma Dial is fueled by the same kind of urgent, accessible and weirdly riveting inquiry into the desire to create. Is Emma a true artist, or is she a cog? By the end of the book, we are dying to find out, and we do.

When I turned away from the painting on the wall, Michael stood right behind me, hands on his hips, at the base of the wooden scaffold, watching me add a coat of glossy blue to a corner of the sea. Perched four feet in the air, a row of warm incandescent lights over my head and the remains of a cheese sandwich at my knees, I felt like a pet bird. A red-footed falcon or a hooded crow. Or a gull. An unlikely pet. I made the painting from a collage of photographs Michael took on a trip to France. Leaden darkness blankets the horizon and there is no land in sight.

A pair of Los Angeles collectors had been watching us for half an hour, leaning against the radiator in their fur-trimmed down parkas. They were in New York to celebrate Christmas and ring in 2006. The Breslauers owned five Michael Freiburg paintings, three that I made, one painted by a previous assistant, and an early one, from 1978, that Michael did himself.

Unobserved, my postprandial painting could get downright languid, so the Breslauers' presence kept me alert, hustling along, swigging coffee and dangling a cigarette between my lips like an old master.

Michael was in the midst of a cunning performance. He had cleaned himself up: an expensive cut to tidy his gray hair and loose black clothes I had not seen him wear before.

He looked sleek and handsome chain — smoking my cigarettes and giving me a piece of direction each time I loaded the brush with paint. I obeyed beautifully, reverently, at moments overzealously brandishing the brush as if a giant feather quivered at its end: my own performance. Michael oozed appreciation.

"Think of gliding below the surface of the water, like a fish. Emma, apply the paint as though you were a fish."

"Emma, a piranha. Loads of piranha in Corsica."

I thought the piranha was a South American fish but did not want to correct him, or even hazard a contradictory guess, in front of the Breslauers, who were charmed by everything he said and did, though they were uncertain how to react, if at all.

"How about a cormorant? Or a goat." My job was to keep the talk jocular, fleshly, skidding between oblique associations.

Catherine Breslauer looked ready to jump in but remained quiet. She and Lewis behaved so carefully with Michael, which was too bad because I had seen them be quite funny on their own.

We both felt the picture was special, the spooky 96-by-111-inch seascape had consumed us for nearly three months, though for entirely different reasons. The picture held me personally, it contained sensations of my own physical and mental effort; Michael knew it was a hit. I often imagined gently tipping into the vast two-dimensional Mediterranean water, swimming lazily, turning my body over and over, neither coming nor going. Last week Michael thought the sea was finished but then decided to exert some last-minute control in front of the Breslauers. They would probably buy it, or another painting from this new series.

Michael's wife Gerda kept calling the studio and his cell as she approached the building in a cab but neither of us picked up the phone.

I continued with the same brushstrokes, moving my hand more deliberately. The Breslauers salivated over Sea-shadow, its austere colors and monumentality, the lack of human presence.

"Emma, we brought you a little holiday cheer," said Catherine. She placed a gold box on the glass-topped table beside the colors I had mixed for Sea-shadow. They gave me vintage Krug each year, which I saved in a cabinet above my fridge.

Lewis Breslauer moved the gift to the ratty yellow recliner where Michael often sat and oversaw my work.

"Why don't we wait for you in the office?" he said.

The Breslauers had seen enough to feel proprietary about the picture, which was the purpose of allowing them to spend the afternoon in the studio.

I paused so the door opening and closing did not jog my hand. No mistakes. Not even tiny ones. Michael took the gold present from his chair.

"It's in the way, Emma. I'll bring it up front for you. While I'm on vacation the lawyer is going to deliver some papers. You have to sign for me."

I did a perfect forgery of his signature, incorporating the inconsistencies of his letters, the way he gripped a pen with his fist. I could copy any mark made by a human hand, though I never let on how proud I was of it.

Gerda had threatened to hide his passport until Michael updated his will.

"It needs to get notarized too. Send it all back by messenger. Also, don't let anyone from the gallery in while I'm away. Don't climb off that scaffold unless it's someone hugely important."

If Michael could have his way, I would spend all my conscious hours up high, painting something enormous on his behalf. Six and a half years ago he hired me straight off the scaffold of a commercial studio in Chelsea where I worked for a few years after art school, painting displays in department stores and trompe l'oeils in townhouse foyers, and a ceiling mural of an African sky in the American Museum of Natural History. I loved that one still. Michael's previous assistant had walked out after a fight that came to blows over stolen materials. I was on the top rung, painting a hundred yards of Greek key pattern on sheets of plywood for a construction barricade on Forty-second and Fifth. Michael shook one of the legs to call me down. He said he had seen the museum sky, another mural in Bloomingdale's of Montparnasse in 1965, and watched me whip a brush across the plywood for a few minutes while he negotiated the fee he would pay my employer if he took me on. I met him at his studio the following morning and showed him slides of my own work-views of my grandmother's house on Cape Cod, the hummingbird feeders filled with dyed red sugar water, my mother's old bedroom that was turned into a TV room where I had spent millions of hours playing video games — as well as art school reproductions and studies. He stood with his feet planted shoulder- width apart, bending over the light box to look through a loupe. My mother, a professor of art history specializing in nineteenth-century painting and sculpture, railed against Michael Freiburg. She pronounced his work soulless and market-driven and it maddened her that so many of her students at the Maryland Institute were smitten with him and his celebrity. That her daughter would paint for the man was more proof that my impulses to work were wrongheaded, because I had to be activated by someone else, to use her parlance. At that time, I refused to see her point on the topic of me not being self-motivated. I would improve the work, I had thought, no matter what it was. And how could the company of Michael's genius not do me some personal good? He gave me a test: to copy one of his pencil drawings, a decently rendered portrait of the painter Therese Oller, his first wife, and then a detail of Velázquez's portrait of Philip IV. He sat at his desk reading travel magazines and talking on the phone while I worked for seven hours. Right away we were not in any hurry to get away from each other. 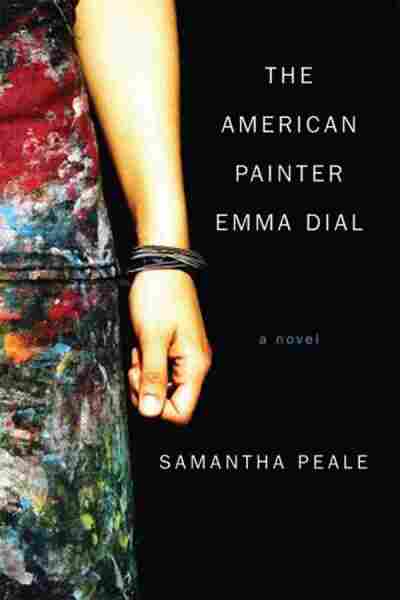