Accessibility links
Kirkuk In Question, U.S. Troops Leave Iraqi Cities U.S. troops pulled out of Iraq's cities Tuesday. But as the U.S. military steps back, it will also be losing influence in Iraq's many outstanding disputes — one of which is over northern Iraq's Kirkuk, home to many of Iraq's ethnic and religious groups, and the country's vast oil wealth. 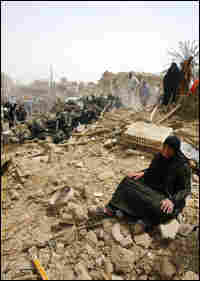 An Iraqi woman sits amid the wreckage caused by a truck bomb outside the northern city of Kirkuk on June 20. Marwan Ibrahim/AFP/Getty Images hide caption 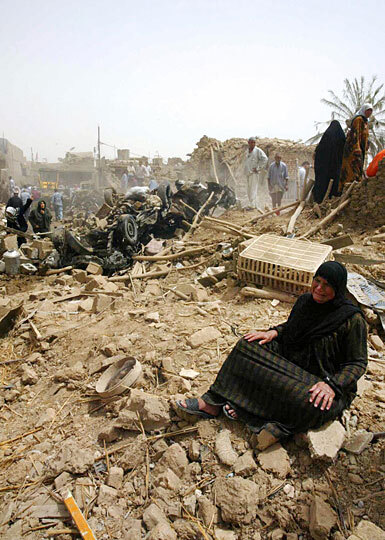 An Iraqi woman sits amid the wreckage caused by a truck bomb outside the northern city of Kirkuk on June 20. 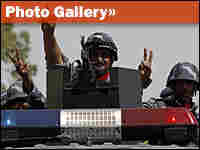 American troops met Tuesday's deadline to be out of Iraq's cities. Both Baghdad and Washington are keen to have Iraqi troops take over responsibility for security, though more than 130,000 U.S. troops remain in Iraq and significant reductions are not expected until after the Iraqi general election in January.

But as the U.S. military slowly steps back, it will also be losing influence in Iraq's many outstanding disputes — one of which is over Kirkuk, home to many of Iraq's ethnic and religious groups and the country's vast oil wealth.

A few celebrations were held Monday in Baghdad, marking the withdrawal of U.S. troops from Iraq's cities to outlying bases and posts. U.S. troops will continue to patrol with Iraqi forces in some urban areas.

But in some parts of Iraq, the mood remains somber. The town of Taza, in the northern province of Kirkuk, is still trying to pick up the pieces of its central square.

U.S. military officials suspect that the bombers were aiming for Kirkuk, but were discouraged by security checkpoints. Taza may have simply been the nearest town they could find to hit. It is also an ethnic Turkoman town, and predominately Shiite Muslim.

"We are united in Iraq," says Taza's mayor, Hadi Fatah. He says the bomb will not create division among Turkomans, Kurds and Arabs, or among religious sects. Shortly after the attack, politicians began flocking to the town's long funeral tent.

Representatives from Baghdad came to pay their respects; members of the Iraqi parliament even pledged to dock their own pay and donate it to the town's reconstruction. Everyone condemned the attack, but some went a bit further.

Ali Sadek of the Iraqi Turkoman Front, a political coalition representing the interests of the ethnic group, says that the only group that can benefit from such attacks is the Kurds. He says that the attack weakens the authority of the government in Baghdad, which strengthens the semi-autonomous Kurds in northern Iraq.

No evidence exists to support his claim, but conspiracy theories abound in Iraq — including another theory Sadek mentions that involves the drawdown of American troops.

The Americans are to blame for letting the Kurdish security forces into Kirkuk, but if the Americans leave, then nothing will limit Kurdish domination of the city, he says.

Not everyone shares Sadek's view, but Kirkuk is one of Iraq's most delicate questions. Saddam Hussein subjected the province's Kurds and Turkomans to ethnic cleansing while trying to make an Arab majority. Now, there is considerable international interest in who will end up controlling Kirkuk and its oil.

So far, the question has been deadlocked in meetings of the Kirkuk provincial council. The Kurds, Arabs, Turkomans and Christians on the council have their differences, but they blame the greater tension on politicians from outside Kirkuk.

Several times in the past year, posturing between Kurds and Arabs has gotten dangerously close to confrontation. That may be one of the things that the Americans will have less control over as they pull back.

Brig. Gen. Craig Nixon, who commands U.S. forces in Kirkuk, says U.S. troops must try to keep on top of the situation in Kirkuk even as they pull away.

"I think the presence of the coalition forces, particularly in the cities, will decrease, and there will be a visible sign of the decrease of the presence. We will continue to support the Iraqis at their request within the security agreement, but I think you will see a reduced presence throughout all of the major cities," Nixon says.

Among Locals, No Big Changes Expected

But citizens in Kirkuk don't appear to be concerned about an abrupt change. Muhammad Khalil Al-Juburi, an Arab member of the provincial council, says he is glad to see the Americans sticking to their deal with Iraq.

"Frankly, there won't be a big difference here. The stability in the region is thanks to the Iraqi forces, and the Americans are pulling out as the Iraqis told them to in the agreement," he says.

In any case, the U.S. base in Kirkuk isn't moving — the Iraqi government has agreed that it is officially outside of Kirkuk, though it borders the town.

In the city's central market, an older Kurdish gentleman says he does hope the Americans stay nearby for a while.

The people of Kirkuk are getting along fine, but it's the politicians that we have to worry about, he says.