Accessibility links
Swine Flu Spread Mirrors Air Travel Analysis of flight destinations of passengers departing from Mexico in March and April show that air travel was key in virus transmission across the globe, according to new research. 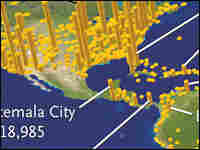 This graphic shows the number of passengers who arrived in these cities flying from Mexico between March 1 and April 20, 2008. Researchers say this is a good measure of the travel volume this spring, and that air travel patterns predicted the spread of swine flu from Mexico. Courtesy New England Journal of Medicine hide caption

This graphic shows the number of passengers who arrived in these cities flying from Mexico between March 1 and April 20, 2008. Researchers say this is a good measure of the travel volume this spring, and that air travel patterns predicted the spread of swine flu from Mexico.

The jet plane is the swine flu virus's best friend. A Canadian team shows why in a graphic published online this week by the New England Journal of Medicine.

The new flu virus was literally jet-propelled. It had the help of 2.4 million airline passengers in spreading around the world before anybody knew it existed. That's approximately how many people flew out of Mexico in March and April. Many of them unknowingly carried the novel H1N1 flu virus far beyond its first stronghold.

Dr. Kamran Khan of St. Michael's Hospital in Toronto says the number of passengers arriving from Mexico in those months predicted whether a country would import the new flu. Though the data are from a year earlier, the Canadian team says international air travel patterns are consistent.

The Canadian group runs a project called BioDiaspora that tracks 2.2 billion airline passenger movements each year. Wherever the next epidemic starts, Khan says, the group can use its air-travel database to predict which places are at highest risk of early spread.

"We can do that analysis from any city in the world at any point in time," Khan says. "This is really the first time we have information and tools to analyze this in a matter of hours and forecast where a disease is going to spread."

In some cases, the travel data for the swine flu pandemic reflect what anyone might have expected. For instance, New York City has 126,345 arriving passengers from Mexico in March and April, the second-highest number of any U.S. city. So it's not surprising that New York was an early focus of the new disease.

But Los Angeles, with the highest number of passengers from Mexico of any city in the world, did not turn out to be one of the most-affected cities early on. Khan says that's because the number of travelers arriving from Mexico is just the starting point for a city's epidemic risk. How things unfold from there depends on how infected people interact on the ground.

In New York City, it just so happened that a number of students at a large Catholic high school in Queens returned from Mexico bearing the virus, touching off an early focus of infection that spread beyond the school.

Khan says the airline passenger patterns show how the swine flu virus would have unfolded very differently if it had originated in another part of the world. This is intuitive — but the data can focus epidemic (or pandemic) scenarios much more precisely.

For instance, if the new flu, or another new virus, popped up first in Hanoi — "a far more sequestered place" than Mexico City, Khan notes --- the airline travel patterns could have predicted a very different spread, in time and space.