Accessibility links
Foreign Companies Bid On Iraqi Oil Licenses Foreign companies could soon be pumping Iraqi oil for the first time in nearly 40 years. The companies are so eager for a crack at Iraq's vast oil wealth that they are willing to overlook some big negatives. But the deals currently on the table won't necessarily be highly profitable for the oil companies. 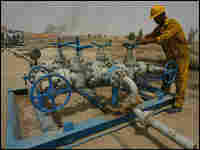 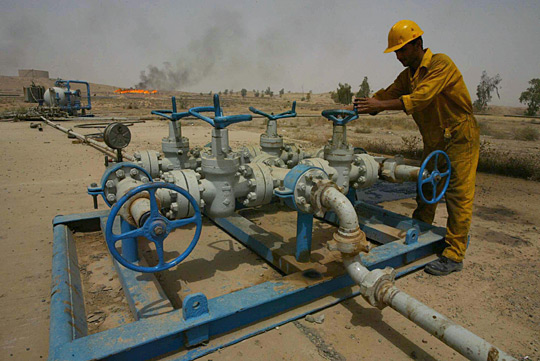 An Iraqi worker checks the valves at the Kirkuk oil field. Tuesday, the government of Iraq opens bids from oil companies interested in helping the country increase its oil production.

Foreign companies could soon be pumping Iraqi oil for the first time in nearly 40 years.

On Tuesday, the government of Iraq opened bids from oil companies interested in helping the country realize its oil production potential.

The oil companies are so eager for a crack at Iraq's vast oil wealth that they are willing to overlook some big negatives: It's a country still at war. There's a lot of political opposition to foreign oil companies. There's no guarantee the contracts awarded at this auction will even be honored. And yet, more than 30 companies submitted bids.

Big Oil has not had an opportunity like this for decades.

No one knows for sure how much oil Iraq has. "It's been poorly explored because of all the political turmoil there," says Roger Diwan, a partner at the consulting firm PFC Energy. "With the Iraq-Iran war, the embargo, sanctions and the second gulf war here, we really haven't had a good look at what's in Iraq since the late 1960s."

Diwan says Iraq is probably just behind Saudi Arabia in its oil reserves. Plus, Iraqi oil can be extracted at a relatively low cost.

"They're large, shallow, relatively high-quality fields with relatively high pressure," says Peter Zeihan, vice president for strategic intelligence at Stratfor, a global intelligence firm. "You don't have to be an Exxon Mobil or a Royal Dutch Shell in order to work in Iraq."

But you may need good government contacts. When Saddam Hussein kicked the foreign oil companies out of Iraq in 1972, many Iraqis supported the move, and there is still strong opposition to any sharing of the country's oil wealth with foreign companies. The withdrawal of U.S. combat troops from Iraqi cities and towns this week has only reinforced Iraqi nationalism. In the coming weeks or months, Iraqi parliamentarians may even move to overturn oil contracts awarded through Tuesday's auction.

"There's still a lot of political risk involved in Iraq in the energy sector," says David Gordon, head of global research at the Eurasia Group, a risk analysis firm. "On the other hand, it is this enormous opportunity. So companies want to get in the game without making a big investment, [while] Iraq as a country wants to force them to put some money on the table."

Oil is being pumped in Iraq right now, but production is far below its potential because the country has not invested in its oil infrastructure.

For Tuesday's auction, oil companies selected which fields interested them and specified how much they'd want to be paid for increasing production at the fields. The oil itself would still belong to the Iraqis, and the Iraqi government set a maximum on what fees it would pay.

The opening round produced only one deal. The Iraqi offers generally fell short of the oil company bids, and additional bargaining seemed likely.

Such deals won't necessarily be highly profitable for the oil companies. In the next phase of the competition, however, the Iraqi government is expected to open fields that have not yet been explored or developed. The companies that win the right to search for oil might then be able to take a share of what they find. It's that competition — not this one — that would mean big money for the companies.

"This is just everybody kind of wanting to get their foot in the door for the bigger prizes that will be here in a year or two," says Stratfor's Zeihan. No one wants to be left out.

"What makes Iraq special," says Diwan, "is [that] there is room for all the big oil companies at the same time, and for all them to have sizable projects. Everybody will get something fairly large."

Iraq is currently pumping about 2.5 million barrels a day. With modern technology and foreign expertise, experts say, the country could produce four times as much. That would be a bonanza for Iraqis, even if they have to share the wealth with foreign companies.