Accessibility links
Madoff Received Maximum Sentence, 150 Years Wall Street swindler Bernard Madoff's prison sentence of 150 years delivered a measure of relief to some of his victims. But others realize they are no better off this morning than they were the day before. And other Madoff victims worry that not enough is being done to prevent the next Madoff.

Wall Street swindler Bernard Madoff's prison sentence of 150 years delivered a measure of relief to some of his victims. But others realize they are no better off this morning than they were the day before. And other Madoff victims worry that not enough is being done to prevent the next Madoff.

A 150 years, that was the prison sentence handed down to Wall Street swindler Bernard Madoff. It did offer a measure of relief to some of his victims, but financially, they are no better off this morning than they were yesterday, and the Madoff victims worry that not enough is being done to prevent, well, the next Madoff.

MIKE PESCA: There are half a dozen dramas on Broadway, two dozen or so off Broadway, perhaps a 100 more if you count all the performance spaces in New York. None of them surpassed the scene at the federal court house in lower Manhattan, yesterday, in conveying the pain of human suffering or raising unanswerable questions about the depths of indifference. Bernard Madoff was called a beast and the most despised person in America by his victims. One hoped that Madoff's jail cell would be his coffin. Another imagined Dante's Satan growing a fourth mouth with which to consume him. This made the words of Richard Friedberg(sp) all the more striking.

Mr. RICHARD FRIEDBERG: Madoff is basically irrelevant to most of the Madoff victims now.

PESCA: Friedberg was one of Madoff's victims who had attended the sentencing.

Mr. FRIEDBERG: The fact that the SEC checked them seven times and each time gave a clean bill of health. People used to rely on the SEC, clearly they could see that you can't any more, so why should anyone investing in this country feel safe. You can't, there must be changes.

PESCA: Actually The Wall Street Journal has reported that the Securities and Exchange Commission examined Madoff's operations no fewer than eight times, each time missing the scheme that was afoot. One of Madoff's victims told the court that SEC incompetence allowed a psychopath to steal from her and the world. For almost a decade, securities investigator Harry Markopolos warned that Madoff was running a fraud. That was the title of his 2005 submission to the SEC. The world's largest hedge fund is a fraud. But as Markopolos told the congressional committee…

Professor JOHN COFFEE (Columbia Law School): I don't think that either Congress or the SEC has focused on those reforms that would really work.

PESCA: Professor Coffee is being called before Congress to offer his expertise. His top reform deals with the fact that independent investment advisors, as Madoff was, are allowed to be the custodians of the money they invest.

Prof. COFFEE: Mr. Madoff served as his own self custodian and it's very easy to corrupt yourself - you can't be your own watchdog.

PESCA: Investment advisors don't want that rule changed. They earn a few extra percent if they are also custodians. But Coffee points out that mutual funds have to use outside custodians - a bank, a trust or some other financial institution that safeguards investors' money - and they are doing quite well as an industry, and by the way no publicly traded mutual fund that he is aware of has been the source of a Ponzi scheme. Yes, changing the custodian rules is a bit of closing the barn door after the horse has escaped, but at least to prevent the next horse from slipping away using the exact same route. But there has been a lack of momentum because, Coffee says, this is in an area where the public understands what kinds of answers might work. Many of Madoff's victims, like Ellen Bernfeld(ph), might not know the details of what to do next, but they sense that something has gone horribly wrong.

Ms. ELLEN BERNFELD: You tell me what kind of system allows a complete fraud to go unnoticed for 20 years. Who's in control of this?

PESCA: The new chair of the SEC is Mary Schapiro. Harry Markopolos has described her as on fire, citing her initiative to empower more whistle blowers. But Markopolos still warns that the agency is staffed with people who lack sufficient expertise, in his words, 3500 chickens trying to chase foxes. 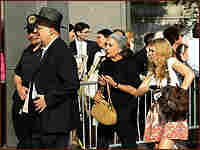 Hundreds of spectators and dozens of victims lined up outside the United States Courthouse in New York on Monday for the sentencing of disgraced financier Bernard Madoff. Timothy A. Clary/AFP/Getty Images hide caption 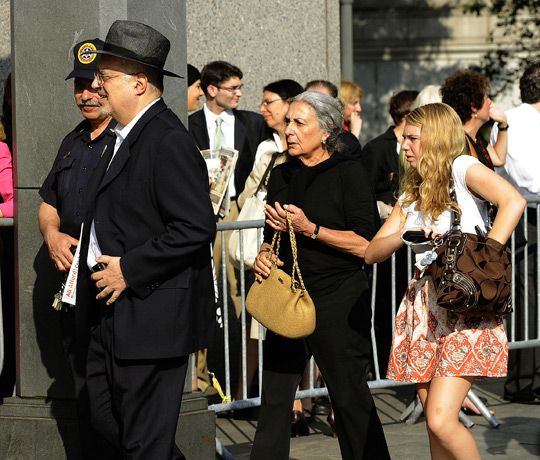 Hundreds of spectators and dozens of victims lined up outside the United States Courthouse in New York on Monday for the sentencing of disgraced financier Bernard Madoff.

Convicted swindler Bernard Madoff was sentenced Monday to 150 years in prison for stealing billions of dollars from hundreds of investors over decades in one of the largest Ponzi schemes in history.

U.S. District Judge Denny Chin called the scope of the fraud "staggering" and gave the 71-year-old financier the maximum sentence allowed, ensuring Madoff would live out his days behind bars. The probation department had recommended a 50-year term, while the defense lawyer had sought 12 years behind bars for his client.

With the verdict, Chin said he was sending a message "that Mr. Madoff's crimes were extraordinarily evil, and that this kind of manipulation of the system is not just a bloodless crime that takes place on paper, but one instead that takes a staggering toll."

Cheers and applause erupted from the gallery as Chin announced the verdict.

Before the sentence was handed down, Madoff faced the wrath of nine of the hundreds of people he cheated in the fraud that wiped out fortunes large and small. Although he showed no emotion during their testimony, he did offer an apology to family and victims.

"I dug myself deeper into a hole" as the scheme progressed, Madoff said, adding that he would "live with this pain, this torment, for the rest of my life."

The victims who came forward testified that they had suffered financial ruin because of Madoff's fraud.

"How could somebody do this to us? How could this be real? We did nothing wrong," said Dominic Ambrosino, a retired New York City corrections officer. "We will have to sell our home and hope to survive on Social Security alone."

"Life has been a living hell. It feels like the nightmare we can't wake from," said Carla Hirshhorn.

Tom Fitzmaurice accused Madoff of cheating his victims "so he and his wife, Ruth, could live a life of luxury beyond belief."

Another victim, Michael Schwartz, told Madoff he wished a jail cell would be the disgraced financier's coffin.

Madoff has already been ordered to forfeit assets worth more than $170 billion — the amount prosecutors say "flowed into the principal account to perpetrate the Ponzi scheme." The amount includes all his personal property, real estate, investments and $80 million in assets that his wife — who has not been charged — had claimed were hers. The order left her with $2.5 million.

After the sentencing, Ruth Madoff said in a statement that she felt "betrayed and confused" by the actions of her husband. "The man who committed this horrible fraud is not the man whom I have known for all these years."

She added: "Not a day goes by when I don't ache over the stories that I have heard and read."

The exact amount of the fraud has yet to be calculated, largely because it was so vast and went on for so long. Weeks before Bernard Madoff's December arrest, statements showed that his firm had $56 billion in accounts.

Madoff's case has become symbolic of Wall Street greed and a laissez-faire attitude toward federal oversight. Madoff, a former Nasdaq chairman, had earned a reputation as a trusted money manager with a track record of delivering stellar returns in good markets and bad. His clients — ranging from Florida retirees to celebrities such as Steven Spielberg, actor Kevin Bacon and Hall of Fame pitcher Sandy Koufax — consistently enjoyed steady double-digit returns.

On March 12, Madoff pleaded guilty to securities fraud and other charges, saying he was "deeply sorry and ashamed." He insisted that he acted alone, describing a separate wholesale stock-trading firm run by his sons and brother as legitimate.

The terms require the Madoffs to sell a $7 million Manhattan apartment where Ruth Madoff still lives. An $11 million estate in Palm Beach, Fla., a $4 million home in Montauk and a $2.2 million boat will be put on the market as well.

Aside from an accountant accused of helping Madoff hide the scheme, no one else has been criminally charged. But family members as well as brokerages that recruited investors have come under intense scrutiny by the FBI, regulators and a court-appointed trustee overseeing the liquidation of Madoff's assets.

In bankruptcy filings, trustee Irving Picard said family members "used customers' accounts as though they were their own," putting Madoff's maid, boat captain and house sitter in Florida on the company payroll and paying nearly $1 million in fees at high-end golf clubs in Florida and on Long Island, N.Y.

Picard has sought to reclaim ill-gotten gains by freezing Madoff's business bank accounts and selling off legitimate portions of his firm, Bernard L. Madoff Investment Securities LLC. (Its season tickets for the New York Mets went for $38,100.) He also is suing big money managers and investors for billions of dollars, claiming they were Madoff cronies who also cashed in on the fraud.