Accessibility links
Director Seeks To Capture Life In Modern Tibet Pema Tseden is the first director in China ever to film movies entirely in the Tibetan language. His latest film, The Search, won the Grand Jury Prize at Shanghai's recent International Film Festival. He says Tibet has always been depicted by outsiders who pander to their own imagination.

Pema Tseden is the first Tibetan filmmaker in China to shoot a film entirely in the Tibetan language, with a Tibetan crew. Courtesy of Pema Tseden hide caption 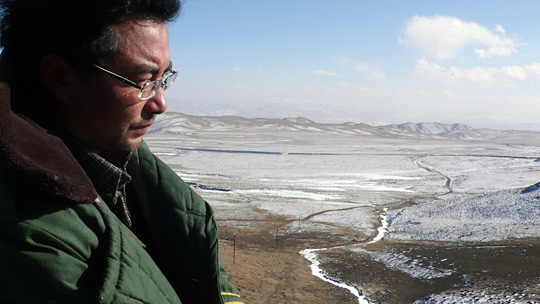 Pema Tseden is the first Tibetan filmmaker in China to shoot a film entirely in the Tibetan language, with a Tibetan crew.

See A Trailer For 'The Search'

Pema Tseden is the son of Tibetan nomads, the only one of three siblings to have finished his schooling. He is also the first director in China ever to film movies entirely in the Tibetan language.

This is a sensitive issue, since the exiled Tibetan leader, the Dalai Lama, has accused China of "cultural genocide" since it occupied Tibet in 1951. But The Search, Pema Tseden's latest film, won the Grand Jury Prize at Shanghai's recent International Film Festival and is slated to be shown at the upcoming Locarno film festival in Switzerland.

Pema Tseden's Tibet is not the land of soaring peaks and picturesque monasteries. It's a land of stark brown hills and squat, featureless, one-story brick houses.

He feels he is setting the record straight.

In his first interview with a Western media outlet, the 40-year-old filmmaker — who is also known as Wanma Caidan — tells NPR that for too many years, Tibet has been depicted by outsiders who pander to their own imagination.

"I think Tibet has always been mythologized and worshipped, and made more remote," he says. "People's psychological expectations and experiences of Tibet are stuck in the past. They don't understand the new Tibet."

The Search is literally a journey through new Tibet. It looks like a documentary, but it isn't. Filmed near Qinghai Lake in the far western Chinese province of Qinghai — the same area where Pema Tseden was born — the movie uses nonprofessional actors speaking only the Amdo dialect.

The movie follows a film crew looking for a singer to perform the part of Tibetan opera character Prince Drime Kunden. This deeply symbolic character epitomizes selflessness and the virtue of charity; he is a previous incarnation of Buddha, who gave away his children and wife, and all his possessions to those in need and eventually plucks out his own eyes.

But in modern Tibet, the film crew struggles to find anyone who can remember — or perform — the story.

"That's really how things are," Pema Tseden says. "In some areas, villagers always used to perform the Tibetan operas, and everyone would go to watch. But people aren't interested anymore, and it's harder to see them performed. Some places still want to continue, but they've received many challenges. Tibetan opera is a symbol of Tibetan culture."

They encounter a Tibetan opera troupe consisting of girls performing stylized dances and using butter churns as props, but who can't actually sing Tibetan opera. They hear a boy monk in a monastery who recites the English alphabet for his audition, and a Tibetan Charlie Chaplin who leaves them in stitches.

The film also features a man who used to sing the part of Drime Kunden and now performs in a nightclub. Drunken and furious, the nightclub singer tells them he hates the role, and asks them whether they really believe love still exists in this world.

Pema Tseden says that, on one level, the film reflects a search for Tibet's disappearing culture.

"It's being buffeted by modernization. It's not obvious, but it's being affected. It's like those sacred stones with Buddhist sutras carved on them. They've been standing like that for hundreds or thousands of years with no apparent change. But, in fact, they're being slowly changed all the time. I think Tibetan areas right now are like that," he says.

Woven into the film are two love stories that accompany the search for the singer, and often the camera is simply perched in the back of the car, recording as a Tibetan businessman tells of his lost love. The style and pace of the film is idiosyncratic, with shots mostly static and sometimes held for as long as two and a half minutes.

The jury at the Shanghai International Film Festival called The Search the most challenging film they saw — "almost a meditation in patience and an exercise in it."

"It's a traditional Tibetan aesthetic. Tibetan tankas, or wall hangings, are like that — they're like a panorama. All the story is in one picture. It's very peaceful, but it's very detailed," he says.

Pema Tseden's own route to filmmaking was circuitous. He studied Tibetan literature in college and worked first as a primary school teacher in his hometown, and then as a civil servant. Eventually, he returned to school as an older student at China's top film school, the Beijing Film Academy. But he believes it is his experience living and working in Qinghai that has had the greatest influence on his films.

The film and its director tread a delicate tightrope, tiptoeing around controversial political issues. As a Tibetan film, the picture underwent stricter censorship than other Chinese films. It was vetted by the State Administration of Film, Radio and Television, as well as by the Religious Affairs Bureau and the United Front Work Department, which manages relations with ethnic minority groups in China.

The Search is Pema Tseden's second film; his first, The Silent Holy Stones, won a Golden Rooster, a major Chinese award, in 2005, the year Beijing celebrated 100 years of film.

Pema Tseden is circumspect when asked whether there is a danger of being co-opted by the establishment, only commenting that all those working in film in China must have a clear idea of what they are trying to achieve.

His film was feted as China's first movie made in Tibetan, with a Tibetan director and crew. But he says it's wrong to celebrate this achievement.

"Lots of people asked me if I felt it was a very glorious and very proud moment. But I felt very sad that it's taken 100 years to have a Tibetan film. I'm not proud; I think it's a matter of great sorrow," he says.

Pema Tseden is now working to get his films more widely shown in Tibetan areas. He will fund free screenings of his second film for local audiences in the more remote Tibetan regions.

"I think it's important for them to see it," he says, noting that his showings of his first film were welcomed by Tibetans. "They were very happy to see their everyday life. They felt it was very close."

But still, he admits, his parents — who keep herds of goats and a few yaks — don't understand what a film director actually does.

At the end of The Search, the film crew finds its singer, a teacher whose government job won't allow him to go home to sing for the traditional festivals. And despite the long search, the film director can't decide whether he is right for the part — a bittersweet conclusion, perhaps reflecting Tibetans' dislocation and doubts about their own identity.