Accessibility links
New Latin Music Crosses Borders At Will California is America's main immigrant magnet. As people move to and from — and within — the state and the U.S., the music produced by this shifting population is changing. The stories of musicians living and working in Oakland and Los Angeles give a sense of how the future of Latin music might sound.

Visit Chico Sonido's site for more information — his new album will be available there soon.

Hear An Excerpt Of A DJ Set Spun By Chico Sonido; The First Track Is His 'Puras Mamalonas' 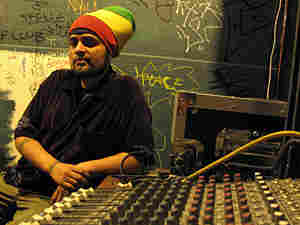 Erick Santero sits in a DJ booth at Luka's Taproom & Lounge in Oakland, Calif. Along with his recording projects, Santero hosts a weekly Latin music party at the lounge. Corey Takahashi/NPR hide caption

California is America's main immigrant magnet. The Latino population is 36 percent of the state and is projected to be the majority in a little more than three decades. As people move to and from — and within — the state and the U.S., the music produced by this shifting population is changing. The stories of musicians living and working in Oakland and Los Angeles give a sense of what the future sounds like.

The musical styles of Erick Santero, an artist, DJ and producer, reflect the travel routes of his Salvadoran father and Guatemalan mother. They fled Central America during a time of civil war, natural disasters and crumbling economies. His parents' goal was to get into the U.S. — and stay there. Santero was born in New York, but the family was deported when he was a baby. They came back to the U.S. many years later.

One of Santero's earliest memories is roaming through Central America with his father, a singer from El Salvador, where sonidero DJs were a common sight, traveling on flatbed trucks that roll into town with a bunch of homemade speakers, microphones and turntables.

"They would just plug into a generator, and they would play at the little festivals in these mountain villages," Santero recalls. They provide musical inspiration for him to this day.

A Community Of Roving Artists

Santero absorbed more musical styles as he moved between New York, New Orleans and his current home, Oakland, Calif. The many places he's lived and traveled through all come together in his music. He's part of a loose-knit and far-flung group of artists he calls "Latin Sound Systems." Santero sees them as a kind of new generation of the roving sonideros he loved as a kid.

"I don't really believe in borders, whether they be musical or geographic or nationalistic," he explains. A typical track, "Agua del Rio," features Santero, along with rappers from Cuba and R&B singers from the San Francisco Bay Area. It also uses the bachata style of guitar that originated in the Dominican Republic. Santero learned the style from Dominicans in New York City.

Another musician whose sound is influenced by multiple migrations is Chico Sonido. His real name is Raul Espinosa, and he launched his career in Monterrey, Mexico.

"I gotta be where things are happening, so I moved to L.A.," he says, "I came here to continue my music, to keep on producing, to get more connected with people."

Los Angeles has given Chico Sonido's work a different flavor, but he admits it can be hard to tell where the Mexican influence on his work ends and the Los Angeles influence begins. He also says that different regions in the U.S. influence him — and other musicians — in specific ways.

"Most of my new album I made here in L.A.," he points out. "It's very different than New York City and other parts of the United States."

There are hints of electronica and dance in his sound, but Chico Sonido and other artists hope to popularize older Latin styles, too. Sometimes they do it with remixes of rare and forgotten songs, or by playing vinyl recordings at a special club night on L.A.'s northeast side. Chico Sonido is a regular DJ at the party called "Mas Exitos."

One of the party's organizers, Eamon Ore-Giron, performs as DJ Lengua. He's had multiple migrations as well. He's Peruvian and Irish, and has lived in the U.S. and Latin America.

"As a lot of immigration has happened to and from El Salvador, Guatemala, Peruvians, Colombians, the world becomes smaller in that sense," he says. Music is meant to move too, but the Latin Sound Systems make a scene where all the big moves happened before the first beat.