Accessibility links
Patterson Hood: Drive-By Boss Does 'Murder' Rock critic Ken Tucker reviews Patterson Hood's new album Murdering Oscar and Other Love Songs. It's Hood's second solo album featuring songs from the early 90's as well as some more recent ones, all of them have been freshly recorded over the past few years. 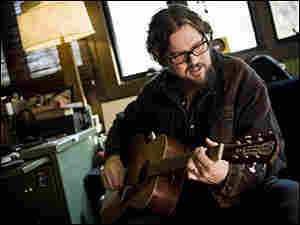 On "I Understand Now," the fourth track on his new solo album, Murdering Oscar and Other Love Songs, Patterson Hood sings about the value of growing up and starting to comprehend advice he heard long ago — of "appreciating the value of generations changing hands."

That sentiment's solidly in keeping with the music Hood makes with his band the Drive-By Truckers, whose sensibility is often all tied up in deep Southern roots and history. But many of these solo songs, like "She's a Little Randy," are also tight little snapshots of moments and people and feelings. "She's a little Randy," Hood sings, "for something she ain't got/A man a little handy this summer sure is hot/Maybe fix some iced tea or lemonade/She's a little randy for some fanning in the shade." (See the complete lyrics.)

In another gesture of generations changing hands, the father accompanies the son on one of the strongest tracks on this album, "Back of a Bible." It's about a guy who writes a love song on the back page of the Good Book. "Back of a Bible" has terrific narrative flow — it's a whole short story compressed into a three-verse song.

The songs on this album gather their power from Hood's articulated drawl and the creepy-crawl of guitar chords and drum patterns. Nowhere is that more true than on the title song, a homicidal scenario whose content is some kind of cross between Johnny Cash and Eminem.

You believe this vehement narrator when he yowls, "I killed Oscar before he killed me"; you also believe him when he says he's "happy, happy, happy" — and that he doesn't "need salvation" or "redemption." This is one cold character.

Where the music made by the Drive-By Truckers can expand to epic proportions without becoming overblown, Hood's solo songs are smaller scale, more intimate. They tap into feelings of longing and regret, but also into fantasies that can be sexy or frightening.

It seems, on the evidence of these songs old and new, that Hood has a gift for both common-man stories and a jarring Southern surrealism. But you don't have to be a Southern boy with a dad who played bass on the Staple Singers' "I'll Take You There" to enjoy the places Patterson Hood will take you.