Accessibility links
FDA Panel Advises Smaller Doses Of Painkillers The Food and Drug Administration's panel voted 21-16 to lower the current maximum dose of nonprescription acetaminophen, which is 4 grams, or eight pills per day. Taking more than that can cause potentially fatal liver damage.

The FDA says acetaminophen, contained in products such as Extra Strength Tylenol, remains the leading cause of liver failure in the United States. Brendan Smialowski/Getty Images hide caption 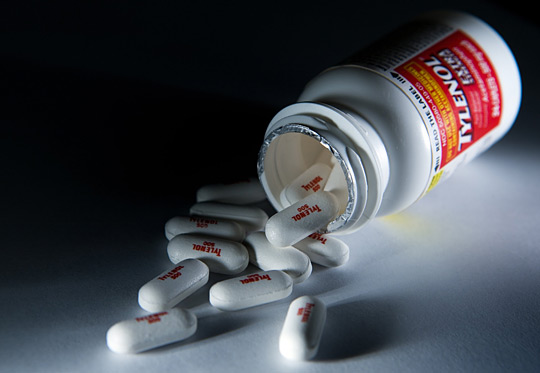 The FDA says acetaminophen, contained in products such as Extra Strength Tylenol, remains the leading cause of liver failure in the United States.

NyQuil is among the dozens of medications on the market that contain acetaminophen. Brendan Smialowski/Getty Images hide caption 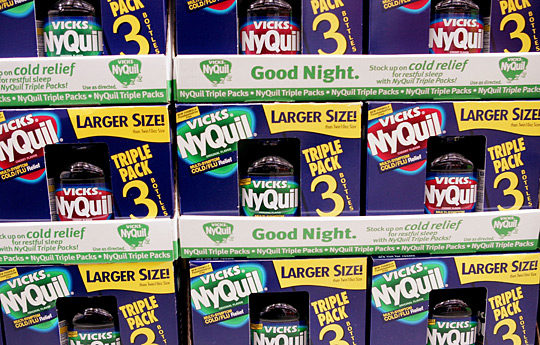 NyQuil is among the dozens of medications on the market that contain acetaminophen.

A panel of government experts voted Tuesday to recommend lowering the maximum daily dose of acetaminophen — the key ingredient in Tylenol and numerous other over-the-counter pain relievers — because of the high incidence of overdose-related liver damage.

But the panel decided not to remove medications that combine acetaminophen with antihistamines and other drugs — such as, NyQuil and Theraflu — from drug store shelves.

The Food and Drug Administration panel voted 21-16 to lower the current maximum daily dose of nonprescription acetaminophen, which is 4 grams, or eight pills of a medication like Extra Strength Tylenol.

The group was not asked to recommend an alternative maximum daily dose.

In a third vote, a majority of panelists said the 1,000-milligram dose should only be available by prescription.

Despite years of educational campaigns and other federal actions, acetaminophen remains the leading cause of liver failure in the U.S., sending 56,000 people to the emergency room annually, according to the FDA.

Some experts complained the measure would create unnecessary work for doctors and patients.

"I think the drain on the health care system, which is already strained, would be enormous," said Dr. Robert Kerns of Yale University.

Acetaminophen is the generic name of a drug found in many over-the-counter and prescription pain killers, including Tylenol, Vicodin and Percocet. The drug may be abbreviated as APAP on prescription medicines.

"This drug is generally considered safe when used according to the directions on its labeling. But taking more than the recommended amount can cause liver damage, ranging from abnormalities in liver function blood tests, to acute liver failure, and even death," according to an FDA statement.

The FDA is not required to follow the panel's recommendations, but it usually does.

The vote to allow acetaminophen to remain in combination products came as a relief to the drug industry. The Consumer Healthcare Products Association, which represents Johnson & Johnson, Wyeth and other companies, defended the combination products Monday, saying they pose a relatively small risk to patients.

Only 10 percent of deaths linked to acetaminophen medications involved over-the-counter combination cold medications, according to the association.

The majority of deaths were caused by either single-ingredient drugs or prescription strength combination drugs such as Percocet, which combines oxycodone and acetaminophen.

Manufacturers could have lost hundreds of millions of dollars in sales if combination drugs were pulled from the market. Total sales of all acetaminophen drugs reached $2.6 billion last year, with 80 percent of the market made up of over-the-counter products, according to IMS Health, a health care analysis firm.