Contemporary African music is often admired for its percussive dance rhythms, its vibrant blend of traditional and Western instruments and its glorious vocal performances. But until recently, the continent has not produced many bona fide rockers. 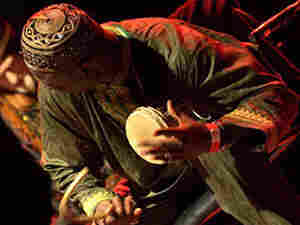 The bluesy scales and shuffling rhythms American rock fans grew up on also exist in West African traditional music, via the history of the Atlantic slave trade. But rock 'n' roll is fundamentally a reflection of the American experience. There's a gritty attitude and expansive spirit that African takes on the genre have been missing — until now, that is. Two new CDs reflect this change: Vieux Farka Toure's Fondo, and Justin Adams and Juldeh Camara's Tell No Lies.

Fondo is the second release from Vieux Farka Toure of Mali. Vieux's late father, Ali Farka Toure, was celebrated as an African bluesman, but his guitar playing had a kind of mystic restraint. He rarely poured on the riffs the way his son does on almost every track of Fondo. This is a guitar hero any rock fan or jam band aficionado could adore.

While Vieux Farka Toure takes his band on the festival circuit in London, British guitarist Justin Adams takes time out from his gig with Robert Plant to rock out with Juldeh Camara, a traditional Fulani musician from the Gambia. Adams' production style has been described as "The-Clash-meets-desert," but it also includes a healthy dose of R&B, Bo Diddley and the spookier sides of the Rolling Stones and Led Zeppelin. What is amazing in this pairing is the raw spontaneity from Camara, both on vocals and on the one-string violin called the riti.

From West Africa to the cities of the United States, to the U.K. and back to the West African source, Adams and Camara, like Vieux Farka Toure, are helping to tighten a big circle of history and music. It's a process that has been going on for a long time, but it has never come so easily.