Accessibility links
Pluots And Apriums: The Best Of Both Parents Demand for these hybrid fruits, especially pluots, has skyrocketed. Pluots now make up a majority of the plum market. In fact, you might be eating a pluot or an aprium and not even know it.

Pluots And Apriums: The Best Of Both Parents

Pluots And Apriums: The Best Of Both Parents 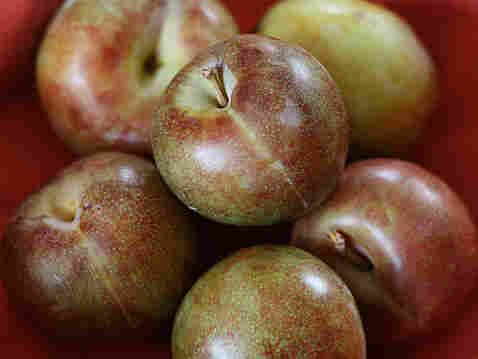 The crossing of plums and apricots has resulted in dozens of varieties of pluots, like these early queens. Pat Tanumihardja for NPR hide caption 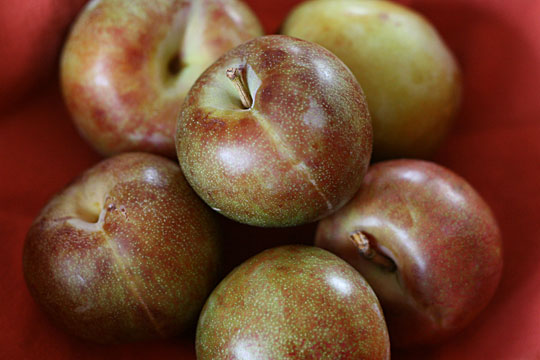 The crossing of plums and apricots has resulted in dozens of varieties of pluots, like these early queens.

Plumcots, pluots and apriums can be eaten out of hand or put into tarts, pies and crisps. They're also tasty in salads. Basically, they can be used in any recipe calling for stone fruit.

Ripen at room temperature in a closed paper bag until fruit is fragrant and gives to light pressure. Then refrigerate for up to three days in a plastic or paper bag. Bring to room temperature before eating for the fullest flavor.

More On Pluots And Apriums 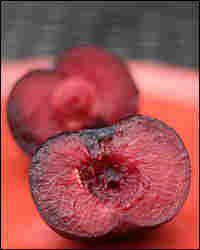 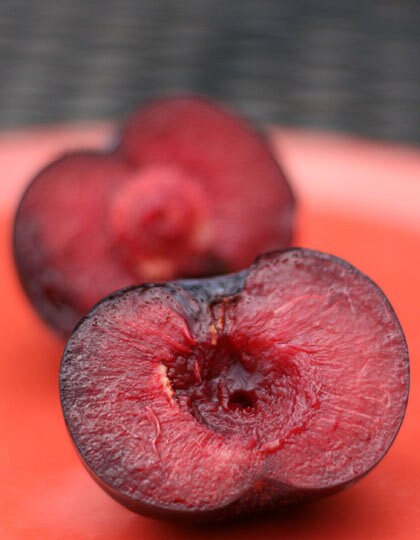 The sweet, juicy, deep red flesh of the flavorosa pluot.

Patricia Tanumihardja writes about food, travel and lifestyle through a multicultural lens — she has lived on three continents and speaks four languages. She manages the Pacific Grove Certified Farmers Market on California's Monterey Peninsula. Her book The Asian Grandmothers Cookbook will be published by Sasquatch Books in October 2009. Please visit her Web site and blog.

One summer not long ago, my nose, discerning the unmistakable fragrance of summer's sweet stone fruit, led me to a canopy-covered market stall. As I inched closer I found, nestled among the everyday plums and apricots, plum imposters in shades of yellow, green and purple, and bright orange apricot look-alikes smudged with a peachy-red blush.

The friendly farmer, Tony Inzana, introduced me to pluots and apriums, complex hybrids of plum and apricot, or, in science-speak, interspecifics. Inzana held out a rosy specimen, rubbing the smooth, purple-black skin of a flavorosa pluot lovingly between his thumb and forefinger. Because a pluot is mostly plum, it looks more like a plum than an apricot. However, its insides are soft and grainy, unlike the firm flesh of a plum. I took one bite, and its floral and candy-sweet flavor exploded in my mouth, and juice dripped all over my fingers.

The aprium, on the other hand, has skin covered with scant fuzz and tastes like a sweeter apricot with a hint of plum.

Inzana grew his first pluots and apriums on his farm, Inzana Ranch, in Hughson, Calif., in 1997. "I had a desire to plant something interesting and ... I like to take things that are unusual to sell at the farmers market," he says. Today, he has about 80 pluot trees and 40 aprium trees with zany names like flavorella, flavor grenade, flavor king, flavor queen and flavorich.

Interspecific fruits, however, have a much longer history.

More than a century ago, horticulturalist Luther Burbank bred the plumcot with a 50-50 plum and apricot split. However, it was Floyd Zaiger who revolutionized the fruit and made it widely available.

Zaiger bred the plumcot with a plum to create the pluot — three-fifths plum and two-fifths apricot — and coined the trademarked moniker. While the plumcot is a simple plum and apricot cross, pluots and apriums (70 percent apricot and 30 percent plum) are the result of intricate crossbreeding over several generations.

Before visions of Frankenfruit start taking shape in your mind, let me reassure you that the fruit are crossbred naturally. Zaiger performs no genetic modification and accelerates the natural selection process through hand pollination.

"We're like bees in nature," says Leith Gardner, Zaiger's daughter. "We take the pollen from one selection of fruit and combine it with another."

Unlike bees that flit from flower to flower in a matter of minutes, developing each hybrid takes 12 to 15 years, Gardner says. The final fruit adopts the absolute best qualities from the plum and the apricot. With a higher sugar content than that of a plum or an apricot alone, both the pluot and the aprium are known for their sweetness and intense flavor.

More than 20 varieties of pluots have been developed by Zaiger Genetics, and more are being developed each season. Each variety comprises a different percentage of plum and apricot genes resulting in fruit of myriad physical attributes: Their skins can be saturated in golden yellow or pale green speckled with magenta, and their flesh range in color from creamy white to blood red.

Half a dozen aprium varieties are currently on the market, all with bright orange skins and flesh. A white-fleshed aprium will soon be distributed commercially.

Demand for these hybrid fruits, especially pluots, has skyrocketed. Pluots now make up a majority of the plum market. In fact, you might be eating a pluot or an aprium and not even know it. "Some stores don't want to label them [correctly] because they don't want to create another space for a fruit that looks similar, or that customers aren't familiar with," Gardner says.

Grown predominantly in Washington and California, pluots are widely distributed in Idaho, Oregon, Utah, Arizona and New Mexico, and increasingly in parts of the Midwest and on the East Coast as varieties suited to these climates are developed. Apriums are a little harder to grow outside the Northwest and California.

Depending on your location, pluots and apriums are available May through October at specialty food stores, online and, of course, at the farmers market. 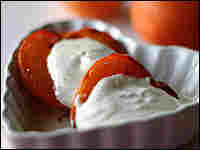 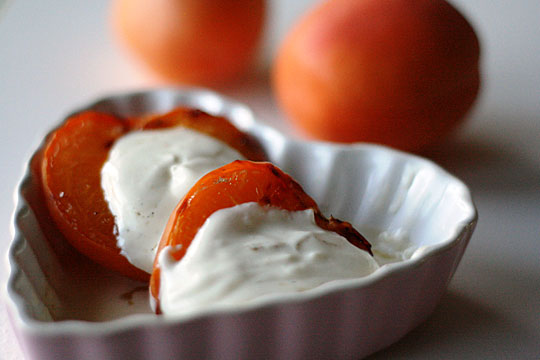 I first discovered creme fraiche when I was living in England several years ago, and it was love at first bite. Creme fraiche, of course, means "fresh cream" in French. This thick, cultured cream is heavenly dolloped atop fruit and cakes, and because it doesn't curdle at high heat, it adds wonderful creaminess to sauces and soups. Find it in the dairy section of specialty markets.

8 apriums (about 1 pound), halved and pitted

One hour before serving, beat the creme fraiche, granulated sugar and cardamom in a medium bowl with a fork until smooth. Cover and refrigerate.

Heat the broiler to high and arrange the rack in the upper third of your oven. Arrange the apriums cut side up in a single layer on a lightly greased baking sheet. Sprinkle the brown sugar over each aprium half and dab with butter. Broil until the apriums just begin to char, 3 to 5 minutes.

Arrange four aprium halves in each of four serving bowls and put a dollop of creme fraiche on each. Serve immediately. 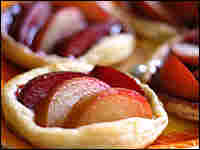 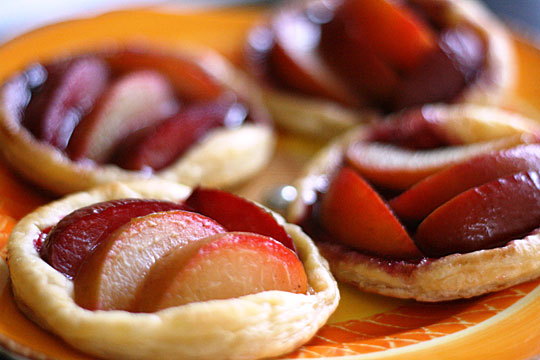 Plum tart recipes abound. Here, I devised a no-fuss recipe for mini versions using pluots and store-bought puff pastry. Anyone can whip them up in minutes with little effort. Plus, you can easily adjust the servings up or down depending on the number of guests.

In a medium bowl, toss the fruit with sugar and allspice.

On a lightly floured surface, roll out the puff pastry until 1/8-inch thick and cut out eight 4-inch circles, gathering remnants and re-rolling the pastry if necessary.

Arrange the pastry discs on a lightly greased baking sheet and brush them with 1 teaspoon jam each. Curl the edges in to form a 1/2-inch border and arrange four to five pluot slices in each cup, overlapping them slightly.

Bake the tartlets for 15 to 20 minutes, or until the pastry is golden brown. Cool on a rack and serve warm with whipped cream or vanilla ice cream. 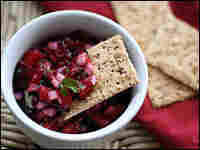 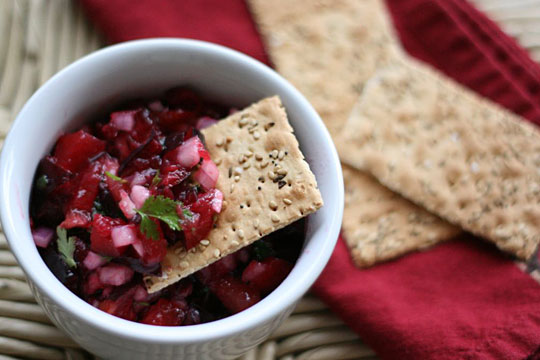 The fresh flavors of summer shine through in this sweet and tangy salsa, even without tomatoes. Savor it with cheese and crackers or as an accompaniment to grilled chicken or pork chops.

In a large bowl, mix together the lime juice and sugar until the sugar dissolves. Toss in the remaining ingredients, adding salt and pepper to taste. Mix well and chill for at least 2 hours. Serve with tortilla chips or crackers.