Accessibility links
Franken Wins Minn. Race After Coleman Concedes The concession by the incumbent Republican came after the state Supreme Court ruled in Franken's favor in a long-standing dispute over a recount in last November's Senate election. 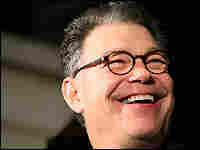 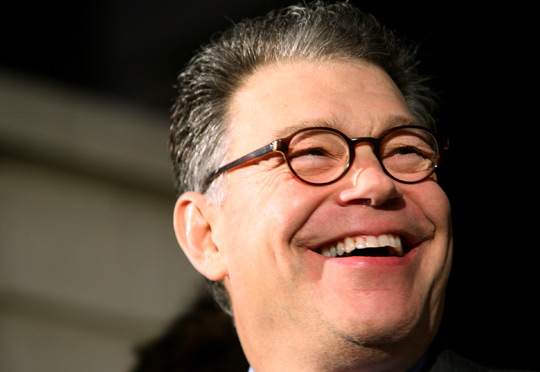 Minnesota's Supreme Court said Democrat Al Franken is entitled to the election certificate he needs to assume office in the U.S. Senate.

Franken, a former Saturday Night Live comedian and liberal commentator, wins the disputed election by only a few hundred votes. He will give Senate Democrats control of 60 seats, enough to overcome any Republican filibuster if they stay united.

Coleman announced his decision at a news conference outside his St. Paul home. "The Supreme Court has made its decision and I will abide by the results," Coleman told reporters.

"In these tough times we all need to focus on the future, and the future is that we have a new United States senator," he said.

Franken, accompanied by his wife, told reporters outside his downtown Minneapolis house that he and his wife were "thrilled" that they could "finally celebrate this victory."

"I can't wait to get started," he added. "I've been trying to keep abreast of what's going on, and I'll do the best I can"

A spokesman for Senate Majority Leader Harry Reid said the earliest Franken would be seated is next week, because the Senate is out of session for the July 4 holiday.

In Tuesday's ruling, the court wrote that "because the legislature established absentee voting as an optional method of voting, voters choosing to use that method are required to comply with the statutory provisions."

It went on to say that "because strict compliance with the statutory requirements for absentee voting is, and always has been required, there is no basis on which voters could have reasonably believed that anything less than strict compliance would suffice."

Republican Gov. Tim Pawlenty, whose signature is needed on the election certificate, has said repeatedly he would sign it if ordered to do so by the court, most recently in an interview Sunday with CNN. But the governor has been less clear on what he would do if the order was vague, and the court's ruling Tuesday said only that Franken was "entitled" to the certificate.

Reid said Pawlenty should respect the votes of his constituents and the court and seat Franken.

The election certificate also requires the signature of Minnesota Secretary of State Mark Ritchie. Ritchie, a Democrat, said he views Tuesday's ruling as a direction to sign the certificate and that he would do so "as soon as the governor issues it." He said he hasn't spoken with Pawlenty and wasn't aware that the governor was out of the state at a conference in Washington.

Franken declared his candidacy more than two years ago, and he and Coleman have combined to spend $50 million in pursuit of the seat. That's more than double what it cost candidates in 2002, when Coleman won the seat that had been held by the late Paul Wellstone.

In the months since Election Day, both men have kept comparatively low profiles. After Coleman's term expired in January, he took a job as a consultant and strategic adviser to the Republican Jewish Coalition, a group that advocates in Washington on Jewish issues.

But Coleman also frequently appeared at the lower-court proceeding that handled his legal challenge, in contrast to Franken, who stayed away. Aside from some trips to Washington to meet with Reid and other Senate leaders, Franken has spent his time in private, saying he was studying issues to be prepared if seated.