Accessibility links
'Shadow' Inventory May Slow Housing Recovery Despite recent signs that the housing market is looking up, some experts say the 3.5 million houses up for sale now could be just the tip of the iceberg. An untold number of homeowners are hesitant to list or are near foreclosure. 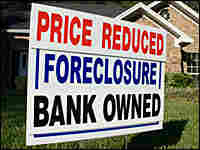 It's not clear how many more homes will be heading into foreclosure. iStockphoto.com hide caption 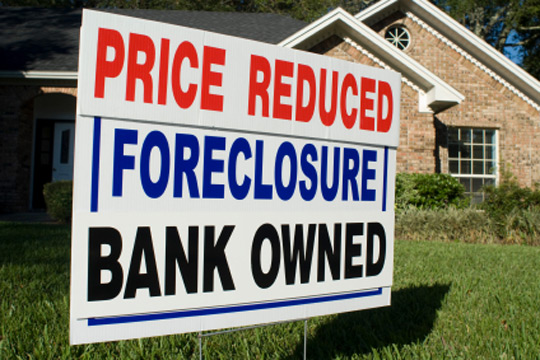 It's not clear how many more homes will be heading into foreclosure.

The housing market has shown some signs of life recently. Existing home sales are up, prompting some optimism. But at the same time, an untold number of houses that have yet to hit the market are waiting in the wings.

And the bigger that so-called shadow inventory, the further off the housing recovery might be.

'The Tip Of The Iceberg'

By the official count, about 3.5 million homes are on the market right now. Given the rate of home sales, that's roughly twice the normal supply.

But "that could just be the tip of the iceberg," says Stan Humphries, chief economist for the real estate Web site Zillow.

It's not what is already for sale that worries economists like him; it's the number of homes that might hit the market in the months to come.

"The portion of the iceberg below the waterline is inventory that's waiting to come into the market at some point," Humphries says. "And as it bleeds into the market over time, it continues to put downward pressure on prices."

Shadow inventory comes in several forms. It includes homes in or close to foreclosure but not yet put up for sale — a number that's increasing. It also includes homes that owners want to sell but are waiting to put on the market until it improves.

In a recent survey, Zillow found that nearly a third of homeowners would have considered putting their homes up for sale if the market were better. Nationally, that would mean between 11 million and 30 million homes that aren't listed but are waiting on the sidelines.

The would-be sellers include people like Jennifer Dalzell. She and her husband bought a five-bedroom row house just four years ago in the shadow of the nation's capital. Her husband is in the military, so they move around a lot.

Dalzell says she's watched the appraised value of their home plummet along with their retirement savings and mutual funds. Her husband will be moving to his new gig in Africa without the family, in part because they don't want to sell at what she believes is the bottom of the market.

"Because we can wait, we'll wait until we feel that we can get a better price for the house," Dalzell says. "I think the market will come back. It feels like there's money out there, and people are just sort of waiting. And I guess we're contributing to that waiting game."

There are no records that quantify how many people like Dalzell there are. In fact, sizing up the shadow inventory is tough.

"Unfortunately, our data are very delayed, and we really don't have a sense of exactly where we are," Former Federal Reserve Chairman Alan Greenspan said at the National Association of Realtors conference in May.

The key question, Greenspan said, is quantifying how many single-family dwellings are available for sale.

But it's not clear how many more homes will be heading into foreclosure. If prices keep falling, that number is bound to grow.

Government data released Tuesday showed the number of homes going through the foreclosure process jumped 22 percent during the first quarter. The number of homeowners who are seriously delinquent on their mortgages is also up. Delinquencies are growing the fastest among borrowers who had good credit scores.

And that's only part of the challenge. As banks take possession of more foreclosed homes, not all of those are listed — sometimes because they are holding back inventory so they don't flood the market.

"I do know that banks are holding onto inventory, and what they're doing is they're metering them out at an appropriate level to what the market will bear," says Pat Lashinsky, chief executive of online brokerage site ZipRealty.

He says this strategy has paid off for banks — even if it also pushes a full housing recovery further out.

"By not flooding the market, they were getting better pricing on the homes that they owned," Lashinsky says. "And instead of people coming in and offering less than what the prices were, they were ending up in multiple-offer situations and getting more for the homes."

Lashinsky adds that a large shadow inventory is not all bad because it creates a kind of buffer. Having so many people hold back prevents a free-fall in home prices. And when the economy recovers, he says, there will be plenty of homes to buy.

Is The Worst Over? Most Economists Say Yes July 5, 2009
Housing Market Still Keeping Economy Down June 26, 2009