Accessibility links
U.S. Combat Troops Leave Iraqi Cities For the first time in six years, Baghdad and other Iraqi cities are almost completely free of U.S. combat troops. Iraq's government declared a national holiday to celebrate the occasion, but a deadly car bomb in the city of Kirkuk provided a grim reminder of the challenges ahead.

For the first time in six years, Baghdad and other Iraqi cities are almost completely free of U.S. combat troops. Iraq's government declared a national holiday to celebrate the occasion, but a deadly car bomb in the city of Kirkuk provided a grim reminder of the challenges ahead.

And I'm Melissa Block. For the first time in six years, the streets of Baghdad and other Iraqi cities are almost completely free of American combat troops. Iraq's government declared a national holiday to celebrate what it called the return of Iraqi sovereignty, as American troops redeployed out of Iraqi cities. Violence marred the occasion when a car bomb exploded in a marketplace in the north of Iraq. But as NPR's Quil Lawrence reports, both Americans and Iraqis emphasize that today is a major milestone.

QUIL LAWRENCE: Baghdad citizens took their cue from the police, who, for one day, replaced their megaphones and sirens with music.

LAWRENCE: Iraqis left the streets empty - some, perhaps, out of anxiety, but many more because of the holiday, the stifling heat, and the fact that they'd been out partying all night.

Here at Firdos Square in the center of Baghdad, where famously, a statue of Saddam Hussein came down over six years ago, there are Iraqi policemen surrounding the square. They've got balloons and streamers and plastic flowers on their cars.

LAWRENCE: Sitting by the fountains in the square, Walla Abunour says he's been waiting years for this day to come. God willing, he adds, the invaders will soon leave Iraq for good. He says he doesn't think that Iraq will fall back into sectarian fighting.

LAWRENCE: Iraqis have risen above that now, says Abunour. He goes on to claim that the worst violence was always instigated from outside the country, a common excuse here in Iraq. But today, there was at least partial support for the idea by the U.S. commander in Iraq, General Ray Odierno. After congratulating the government on its day of sovereignty at a news conference, he went on to give a stern warning to the eastern neighbor.

General RAY ODIERNO (U.S. Commander, Iraq): Iran is still supporting, funding, training surrogates who operate inside of Iraq. I think many of the attacks in Baghdad are from individuals that have been, in fact, funded or trained by the Iranians.

LAWRENCE: The day was marred by several attacks, including a car bomb in the northern city of Kirkuk. Undeterred, Iraqi leaders marked the holiday with televised speeches to the nation.

LAWRENCE: President Jalal Talabani thanked coalition troops for their sacrifice and praised the Iraqi security forces. Talabani is from the country's Kurdish minority, which is the only sector of the population that openly supports a continuing American presence. Prime Minister Nouri al-Maliki is in a more complicated position. Even as he continues to lean on the U.S., he's pushing a nationalist agenda that may well win him a second term in Iraq's elections next year.

LAWRENCE: It was the Iraqi government that brought peace to the country, Maliki said. And, he said, anyone who doubts Iraq's readiness is aiding terrorists. He mentioned the United States mostly in the context of how soon they would depart Iraq, thanks to Baghdad's tough bargaining with the Americans.

Today's milestone is mostly symbolic. No U.S. troops actually left the country, and combat operations will continue with an emphasis on the Iraqi role. American officials still voice serious concerns that internal divisions may not subside before the complete American withdrawal in 2011. 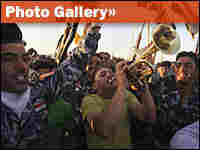 "This day, which we consider a national celebration, is an achievement made by all Iraqis," the prime minister said in a televised address. Maliki said the continued presence of foreign troops in the country was Hussein's "most serious legacy" and warned that "those who think that Iraqis are not able to protect their country and that the withdrawal of foreign forces will create a security vacuum are committing a big mistake."

Shortly before the withdrawal was complete, four U.S. soldiers were killed in combat, the latest casualties in a war than has claimed more than 4,300 American troops and tens of thousands of Iraqis. That was followed by the third bomb blast in recent days — the latest a car bomb that killed at least 30 people and wounded nearly 45 in the northern city of Kirkuk.

The urban pullout completed on Monday, part of a U.S.-Iraqi security pact, marks the first major step toward a complete withdrawal of all U.S. forces from the country by the end of 2011. The United States had closed or returned to local control 120 bases and facilities and will turn over or close an additional 30 sites by Wednesday, Pentagon spokesman Bryan Whitman said.

On the streets of Baghdad, a military parade was held in the heavily fortified Green Zone diplomatic district featuring thousands of Iraqi soldiers and police in U.S.-donated Humvees, armored cars and tanks.

President Jalal Talabani thanked the United States, saying the day of celebration would not have been possible without the U.S. invasion in 2003 that toppled Hussein.

"While we celebrate this day, we express our thanks and gratitude to our friends in the coalition forces who faced risks and responsibilities and sustained casualties and damage," Talabani said. He also warned that "security will not be achieved completely without the proper political environment and without a real national unity and reconciliation."

However, insurgents have increased attacks in the weeks leading up to the U.S. drawdown, including the three bomb blasts that killed nearly 200 people.

Some American troops will remain in urban areas to train and advise Iraqi forces, and combat troops will return to cities only if asked. The U.S. military will continue combat operations in Iraq's rural areas and near the border, but only with the Iraqi government's permission.

U.S. officials have not said how many troops will remain in advisory roles, but the vast majority of the more than 130,000 U.S. forces remaining in the country will be in large bases scattered outside cities.