Accessibility links
U.N. Backs Ousted Honduran President The U.N. General Assembly unanimously condemned the military takeover in Honduras and demanded that Manuel Zelaya be immediately returned to power. Zelaya, who was forced into exile in Costa Rica, vows to return to Honduras. The new administration says he will be arrested if he does. 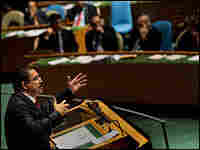 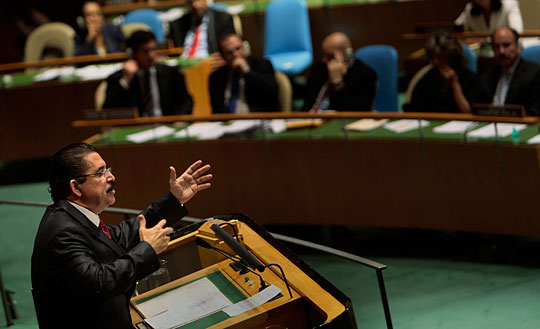 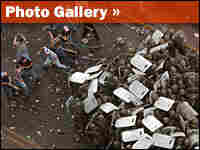 Tensions continue to rise in Honduras two days after a military coup ousted President Manuel Zelaya, who says he plans to return to Honduras on Thursday. The newly installed administration of Robert Micheletti says he will be arrested if he does.

Zelaya spoke before the United Nations General Assembly on Tuesday as the president of Honduras. Before his speech, the General Assembly passed a resolution condemning the coup and calling for Zelaya to be returned immediately and unconditionally to power.

At the same time, demonstrators in the Honduran capital, Tegucigalpa, took to the streets to support Micheletti, who they say is the new legitimate president of Honduras.

Hundreds of protesters — many holding blue and white Honduran flags — waved signs saying "Zelaya, don't come back!" and "Micheletti is our president." The protests contrasted sharply to demonstrations by Zelaya's supporters the night before, which disintegrated into street battles as security forces fired tear gas and used batons to disperse the crowds.

Speaking at the U.N. in New York on Tuesday afternoon, Zelaya described Honduran soldiers shooting the hinges off the door of his bedroom Sunday morning and then bursting into the room.

The soldiers took Zelaya, still in his night clothes, to the airport, bundled him onto a plane and, in his words, "dumped" him on the tarmac in San Jose, Costa Rica.

Zelaya told the U.N. that if his ouster is allowed to stand, Honduras will revert to the dark days of military coups and dictatorships.

"Because at the moment when there is pressure, instead of looking for a legal and a correct way, brutal force was used," Zelaya told the General Assembly. "We've come back to the old times, when once again we are seeing the criminality of the state."

The leftist Zelaya had made many political enemies in Honduras during his term as president. He was viewed by some as inflexible. In the week before the coup, he had tried unsuccessfully to fire the head of the armed forces.

But the final straw for his opponents was Zelaya's drive to allow presidents to run for a second term in office. The Honduran Supreme Court ruled that a referendum he was sponsoring on the issue was illegal, but he decided to hold the balloting anyway as a test of public opinion. That vote was supposed to happen on Sunday, but instead he was arrested and thrown out of the country.

Governments around the world have condemned the coup, but leaders in Latin America have been calling the loudest for Zelaya to be reinstated in Tegucigalpa.

At a meeting of Latin American leaders Monday in Nicaragua, Mexican President Felipe Calderon said, "For all of us, it is absolutely unacceptable, the use of force in order to overthrow from power one government that has been legally constituted."

Ten Latin American countries have pulled their ambassadors out of Honduras in protest. The World Bank has suspended lending to the newly installed administration.

Zelaya has vowed to return to Tegucigalpa on Thursday and resume his position as the president. But at a rally Tuesday in the capital, Micheletti said Zelaya will be arrested if he attempts to come back.

Amid shouts of "democracy," Micheletti said he will serve out the rest of Zelaya's term and a new president will be elected during regularly scheduled elections in November.