Accessibility links
Korean School Preps Students For Ivy League With admissions getting more competitive every year, spots at top American colleges are becoming a globally coveted commodity. In South Korea, one elite prep school has become the envy of many upper-crust U.S. prep schools with its success.

Students in class at the private Daewon Foreign Language High School in Seoul, South Korea. The highly competitive school is noted for placing many of its graduates in elite American universities. Saebomi Yoo for NPR hide caption 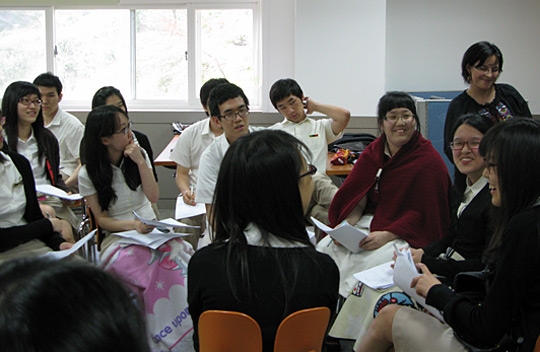 Students in class at the private Daewon Foreign Language High School in Seoul, South Korea. The highly competitive school is noted for placing many of its graduates in elite American universities. 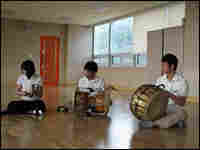 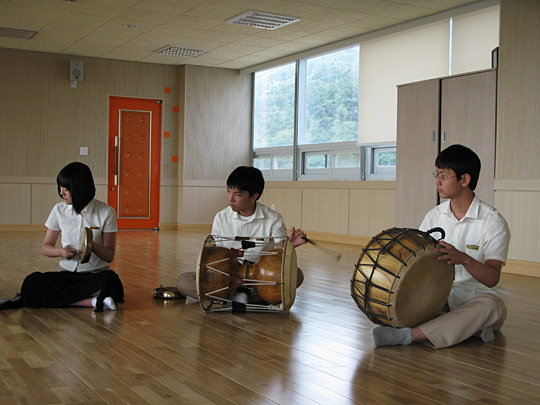 With admissions getting more competitive every year, spots at top American colleges are becoming a globally coveted commodity. In Seoul, one elite South Korean prep school has become the envy of many upper-crust U.S. prep schools with its success at getting its students into Ivy League colleges.

The Korean school's formula is simple: Select the country's brightest and most ambitious students and work them extremely hard.

Roughly 1,200 students at the private Daewon Foreign Language High School begin their day with a nationally required curriculum of Korean, math and English. Three afternoons a week, about a quarter of them continue their studies in the Global Leadership Program — a special course that emphasizes the research, writing and analytical skills they will need at top U.S. colleges.

Before, Koreans hoping to get into U.S. colleges would usually start out at an American prep school. Now, some go directly from a handful of elite Korean schools, including Daewon.

Most of them are the children of affluent, globe-trotting South Korean professionals.

Song You-jin, for example, is planning to apply early decision to Yale to study political science.

"I was always set on going to university in the United States because my dad graduated [from] Wharton and was a professor at Columbia, so I thought the schools were really great there," she says.

Her family returned to South Korea when Song was in middle school, about the same time she became interested in English debate. Daewon has the best debate team in South Korea, which was another reason she was attracted to the school.

On a recent night at the school, students line up for a dinner of fish, eggs, fried rice and plum tea. The Global Leadership Program students finish study hall at 7:30 p.m. It used end at 11 p.m.

Senior Hwang Jae-kyun takes Spanish and Chinese, in addition to English and Korean. He says he has finally adapted to the grueling schedule.

"Honestly speaking, during my first and second years, I was suffering from sleep deprivation almost every day, because there was just a lot of homework and I had to stay up until maybe 3 a.m. in the morning. And then I'd try to stay up during classes the next day, but sometimes I'd just fall asleep during class, too. But that doesn't happen that often," he says.

Hwang's efforts have helped him get 1570 out of 1600 on his SATs, and perfect scores on all five of his advanced placement tests.

Composition teacher Joseph Foster says the students' brilliance and motivation keep him and his colleagues on their toes.

"The students scrutinize us carefully, and because of their high expectations, there are high demands and expectations on us. If we're wasting any time or if we're giving them something they don't consider useful to them, then they're going to judge us harshly," he says.

Daewon's college counselor, Eric Cho, runs down the list of admissions for this year's graduating class: two at Harvard, seven at Cornell, five at Stanford, and so on.

But Cho says that grinding competition for elite jobs and even marriages produces a Korean fixation on famous name schools. He says that getting families to "settle" for excellent non-Ivy League institutions — such as Harvey Mudd College, Swarthmore, Amherst, Williams and Pomona College — is a big challenge.

According to the New York-based Institute of International Education, the number of South Korean students at U.S. colleges and universities jumped by 11 percent last year to nearly 70,000. Only India and China send more, and they have far larger populations.

And of course, American schools would probably not be snapping up Daewon's graduates if they thought they were just bland bookworms and cookie-cutter hyper-achievers.

"This is one of the narratives about students like our students: that they're just mechanical study machines, and I can't tell you how wrong that is," says Foster, the writing instructor.

Cho, the college counselor, points out that while making out in the hallways would not be appropriate, there is no ban on students dating each other.

Students say they still eke out time for hobbies and community service. After classes, members of the extracurricular Samulnori Club pound away their stress with a traditional Korean percussion jam.

"These kids study a lot, they work hard, they're super disciplined," Foster says. "But any chance they have to be creative, they jump at it."

Our report said that this year's graduating class at Daewon included seven students at Cornell and five at Stanford. Those are actually the number of students that will be attending those schools. Twelve students were admitted to Cornell and seven to Stanford.