Accessibility links
Bush's Climate Plan Faces G-8 Opposition President Bush is urging 15 major nations to agree on a global goal for reducing greenhouse gas emissions. The plan isn't playing well with critics, including some leaders with whom the president will meet at upcoming G-8 economic talks.

President Bush is urging 15 major nations to agree on a global goal for reducing greenhouse gas emissions. The plan isn't playing well with critics, including some leaders with whom the president will meet at upcoming G-8 economic talks.

President Bush says he wants to be a world leader on an issue that his administration was accused of ignoring. The issue is climate change, and NPR's Elizabeth Shogren has more.

ELIZABETH SHOGREN: President Bush says by the time he leaves office he wants to set a long-term global goal for reducing the greenhouse gas emissions that are causing climate change.

President GEORGE W. BUSH: The United States would convene a series of meetings of nations that produced most greenhouse gas emissions, including nations with rapidly growing economies like India and China.

SHOGREN: During a speech in Washington yesterday, the president said he wants each country to set its own target for cutting emissions. Democratic Senator Barbara Boxer heads the Senate Environment Committee. She says the president's announcement gives her hope.

Senator BARBARA BOXER (Democrat, California): I view this as finally some movement. This is good news. That doesn't mean we're not going to have some very large disagreements, but there are things that we can do right now to make a real difference.

SHOGREN: For example, she says the government could increase mileage standards for cars. But environmentalists were skeptical. They say the president's plan is vague and would distract from a more vigorous international effort to fight climate change. 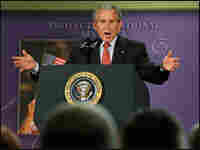 President Bush speaks about his administration's international affairs budget May 31, ahead of his trip to Germany for the 33rd annual G-8 summit. Chip Somodevilla/Getty Images hide caption

Listen to NPR's interview with NASA administrator Michael Griffin in which he says he "can't say" if global warming is "a long-term concern or not."

Listen to an interview with Jim Hansen, NASA's top climate change scientist at the Goddard Institute for Space Studies, and his reaction to the comments by Griffin.

President Bush unveiled a long-term strategy for dealing with climate change Thursday, ahead of the annual G-8 summit next week where the issue will be at the top of the agenda.

The president urged 15 major industrial nations to reach an agreement by the end of next year on goals for reducing greenhouse-gas emissions globally.

The plan marks a major shift for a president who, six years ago, downplayed the issue of climate change. Yet critics say the plan announced Thursday is vague and doesn't go far enough.

European nations accuse the U.S. of foot-dragging on an issue that affects virtually everyone in the world — and they are calling for a much more aggressive approach. For instance, Germany has proposed a "2-degree" target, whereby the goal is to hold global warming to no more than a 2 C (3.6 F) increase from pre-industrial temperatures. Experts say achieving that goal would require a dramatic reduction in emissions by 2050.

President Bush has rejected that proposal and is now calling on nations to set a global emissions goal, leaving each nation to decide how to reach that goal. The details of the plan will be decided in a series of meetings beginning this fall, the president said.

"The United States takes this issue seriously," Bush said. "The new initiative I'm outlining today will contribute to the important dialogue that will take place in Germany next week."

But Tony Juniper, head of the environmental group Friends of The Earth, said Bush's announcement serves as a delay tactic.

"This is a deliberate and carefully crafted attempt to derail any prospect of a climate change agreement (at the G8 summit) in Germany next week," Juniper said. "He is trying to destroy the prospect of that getting anywhere by announcing his own parallel process with very vaguely expressed objectives."

The Bush administration has rejected other proposals for controlling climate change. It does not support global carbon-trading programs that would allow countries to buy and sell credits to comply with carbon dioxide standards, an approach that has been attempted with other types of pollution. The White House also has rejected energy-efficiency targets advocated by the European Union, arguing that a standard that makes sense for one country does not necessarily make sense for another.

James Connaughton, chairman of the White House Council on Environmental Quality, said the United States is not against setting goals but prefers to focus on specific sectors, such as cleaner coal and reduced dependence on gasoline.

"The U.S. has different sets of targets," Connaughton told the Associated Press.

In recent years, climate change has progressed from a fringe issue in the United States to one of major concern to Americans, according to polls.

But, as the president unveiled his plan Thursday, NASA administrator Michael Griffin questioned whether global climate change is even a problem and whether it deserves international attention.

"I have no doubt that ... a trend of global warming exists," Griffin said during an interview on NPR's Morning Edition. "I am not sure that it is fair to say that it is a problem we must wrestle with. To assume that it is a problem is to assume that the state of Earth's climate today is the optimal climate, the best climate that we could have or ever have had and that we need to take steps to make sure that it doesn't change."

His comments elicited disbelief from Jim Hansen, NASA's top climate change scientist. "I nearly fell off my chair (when I heard the comments)," he said during an interview on NPR's Day to Day. "It's remarkably uninformed about the status of our understanding (of climate change)," he added.

The issue will get plenty of attention in another meeting this year: The signatories of the Kyoto Protocol are due to meet in Bali to discuss a follow-up agreement. But critics say the protocol is meaningless without the cooperation of the U.S., the world's largest contributor of greenhouse emissions.

The protocol, which expires in 2012, was never submitted to Congress for ratification. President Bush objected to it because it exempts China and India, two of the world's fastest-growing economies, from the tough standards. In his speech Thursday, Bush included China and India in his list of countries he hopes will engage in goal-setting.