Accessibility links
NASA Chief Assailed for Climate Comments Policymakers and scientists are strongly criticizing comments by Michael Griffin, the head of NASA. In an earlier interview with NPR, he said that he's not sure global warming is an issue that the space agency — or humans — need to "wrestle with."

Policymakers and scientists are strongly criticizing comments by Michael Griffin, the head of NASA. In an earlier interview with NPR, he said that he's not sure global warming is an issue that the space agency — or humans — need to "wrestle with."

The president's proposal coincides with a debate sparked by one of his appointees. Michael Griffin leads the space agency NASA, which does a lot of research on climate change. But on this program yesterday Griffin questioned how much it mattered.

Mr. MICHAEL GRIFFIN (Administrator, NASA): I have no doubt that global - that a trend of global warming exists. I am not sure that it is fair to say that it is a problem we must wrestle with.

INSKEEP: That was a provocative comment, and the many responses include one from inside NASA itself - at least one. NPR's David Kestenbaum has more.

DAVID KESTENBAUM: Here are a sampling of comments. First, Berrien Moore. He directs the Institute for the Study of Earth, Ocean, and Space at the University of New Hampshire.

Professor BERRIEN MOORE (Director, Institute for the Study of Earth, Ocean, and Space, University of New Hampshire): I don't understand it. I'm really stunned that he would say something like this. I mean I just really find it shocking.

KESTENBAUM: And Michel Oppenheimer, professor of geosciences and international affairs at Princeton University.

Professor MICHAEL OPPENHEIMER (Geosciences and International Affairs, Princeton University): It's astounding that the head of a major U.S. science agency could hold such attitudes, basically ignorance, about the global problem. In fact, it's so astonishing I think he should resign.

KESTENBAUM: NASA administrator Michael Griffin is generally well regarded by the space community. He took the helm as NASA was trying to return astronauts to space after the Columbia accident. He has six graduate degrees in physics, engineering and business. But the agency does fund a lot of climate change research, and all climate scientists interviewed for this story said they felt Griffin was widely out of step with the mainstream scientific view when it comes to the impacts of climate change.

Yes, they said, climate change may have some benefits for certain regions -longer growing seasons for example - but they said the downsides would be substantial. How, they asked, could rising sea levels by tens of feet be good? They point to reports by national academies of science around the world and in the United States, also this year's major international climate reports sponsored by the United Nations. Again, Berrien Moore.

Prof. MOORE: Scientific evidence, particularly as reflected in the Intergovernmental Panel on Climate Change studies volumes two and three, show that by and large it is overwhelmingly negative for the world.

KESTENBAUM: NASA spends a billion and a half dollars a year on Earth-observing satellites and earth science. Griffin himself calls NASA the world's pre-eminent organization in the study of Earth, which is why Michael Oppenheimer from Princeton found his comments so surprising.

Prof. OPPENHEIMER: You know, what I really think is that he really doesn't know what to think about climate change because he hasn't thought much about it, and that may be is the saddest comment of all.

KESTENBAUM: Griffin said in the interview it is not the agency's job to make policy decisions; NASA just collects the data. The Earth science community in general is not terribly happy with NASA these days. The National Academy of Sciences says six NASA Earth science missions have been delayed, scaled back, or cancelled.

Representative BART GORDON (Democrat, Tennessee): You have to keep in mind that NASA plays a very important role here. Probably 75 percent of the information that we get about global warming here in the United States is under NASA's jurisdiction, and much of that is not replicated anywhere else in the world.

KESTENBAUM: Gordon says he was shocked by Griffin's comments, but he doesn't think Griffin should resign.

Rep. GORDON: You know, I don't. I have respect for him. I think that he is a good administrator. And I have to think that Mr. Griffin, once reflecting on this, will have a different opinion.

KESTENBAUM: A spokesman for NASA said Griffin did not have any additional comments to make.

INSKEEP: By the way, when the Associated Press talked to the NASA spokesman, the spokesman blamed NPR for asking Michael Griffin questions about climate change. You can decide for yourself: You can hear the interview again at npr.org. 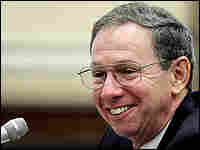 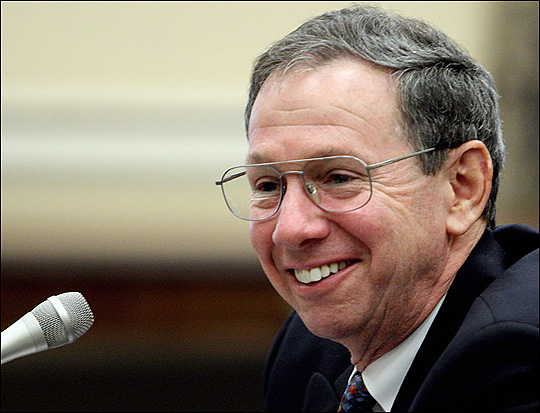 NASA administrator Michael Griffin defends the space agency's programs, including plans for a permanent moon base and manned missions to Mars. He also says that while NASA studies climate change, the agency has no authorization to "take actions to affect climate change in either one way or another."

The following are excerpts from Griffin's conversation with Steve Inskeep, edited for clarity:

It has been mentioned that NASA is not spending as much money as it could to study climate change — global warming — from space. Are you concerned about global warming?

I'm aware that global warming exists. I understand that the bulk of scientific evidence accumulated supports the claim that we've had about a one degree centigrade rise in temperature over the last century to within an accuracy of 20 percent. I'm also aware of recent findings that appear to have nailed down — pretty well nailed down the conclusion that much of that is manmade. Whether that is a longterm concern or not, I can't say.

Do you have any doubt that this is a problem that mankind has to wrestle with?

I have no doubt that ... a trend of global warming exists. I am not sure that it is fair to say that it is a problem we must wrestle with. To assume that it is a problem is to assume that the state of Earth's climate today is the optimal climate, the best climate that we could have or ever have had and that we need to take steps to make sure that it doesn't change. First of all, I don't think it's within the power of human beings to assure that the climate does not change, as millions of years of history have shown. And second of all, I guess I would ask which human beings — where and when — are to be accorded the privilege of deciding that this particular climate that we have right here today, right now is the best climate for all other human beings. I think that's a rather arrogant position for people to take.

Is that thinking that informs you as you put together the budget? That something is happening, that it's worth studying, but you're not sure that you want to be battling it as an army might battle an enemy?

Nowhere in NASA's authorization, which of course governs what we do, is there anything at all telling us that we should take actions to affect climate change in either one way or another. We study global climate change, that is in our authorization, we think we do it rather well. I'm proud of that, but NASA is not an agency chartered to, quote, battle climate change.