'I Was Only Going Out'

'Everything Turns To You'

'Under A Silent Sea' 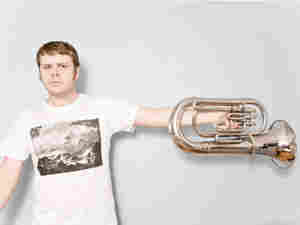 Loney, Dear discusses his latest release, Dear John during a visit to World Cafe. Courtesy of the artist hide caption

Loney Dear favors the kind of quiet harmonies, ready percussion and retrospection that are perfect for a Sunday afternoon. Loney Dear is the stage name of Swedish songwriter and multi-instrumentalist Emil Svanangen, who successfully self-promoted his music for years. His first album, 2003's The Year of River Fontana, was recorded in his parents' basement with a microphone and PC. His rough recordings began circling by word-of-mouth as Svanangen passed out demos at shows.

Since then, Svanangen has released four more albums and his burgeoning underground following has been spreading across the U.S. as well as Scandinavia. Dear John, his latest album, finds Svanangen in familiar territory. His twinkling lo-fi keeps its artistic integrity while staying wholly accessible, and Svangen's ethereal, yearning vocals set the album apart. Pull in some hand claps, enough strings to make a mini orchestra and intricate drum beats, and you've got a masterpiece. In this interview, Svanangen talks about the album and about his unique approach to writing and recording songs.