Accessibility links
Movie Review - 'Humpday': When Andrew Met Ben: A 'Humpday' To Remember These days, the term for close, nonsexual friendships between straight men is "bromance." Critic Bob Mondello says the new comedy Humpday takes the idea about as far as it can go. (Recommended) 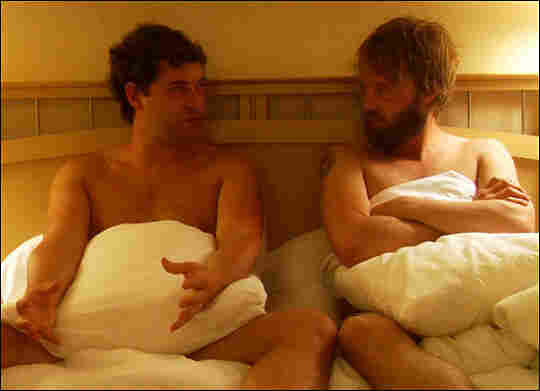 It Happened One Night? Ben (Mark Duplass, left) and Andrew (Joshua Leonard) test the bounds of their relationship — and the bonds of marriage — with a plan to make a sort of buddy-porn movie. Magnolia Pictures hide caption 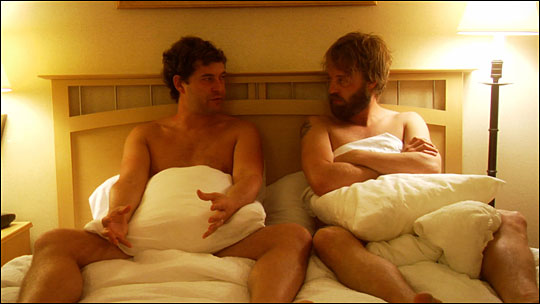 It Happened One Night? Ben (Mark Duplass, left) and Andrew (Joshua Leonard) test the bounds of their relationship — and the bonds of marriage — with a plan to make a sort of buddy-porn movie.

Rated R: Some strong sexual content, pervasive language and a scene of drug use 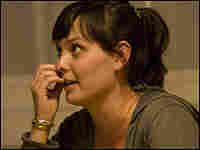 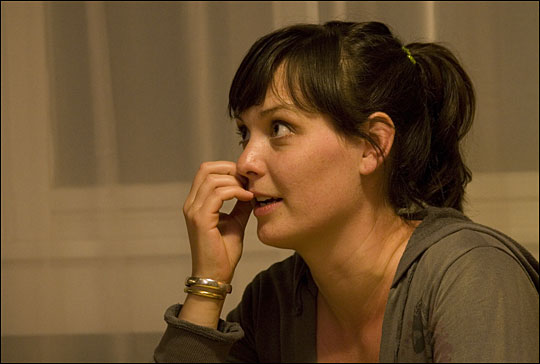 Ben and Anna are a happily married suburban couple who've decided to try to have a baby. Which is more or less what they're up to just before they hear someone at their front door at 2 a.m.

It's Ben's old college pal Andrew — a diehard bohemian who has been out of touch for a decade and who is now hoping to crash at their place and maybe get them to join him in some hearty partying.

Not wanting to offend his old buddy, Ben goes along to an artsy sort of gathering where, fortified by wine and pot, Andrew and some creatively inclined friends are trying to come up with a winning gimmick for an amateur-porn contest called Humpfest.

Ben, who's pretty stoned — and pretty transparently trying to keep up with the cool kids — offers easily the most out-there suggestion:

"This is what we're doing," says Ben.

"What are we doing?" replies Andrew.

"You and me. Two straight dudes. Straight ballin'."

"It's beyond gay," a helpful observer volunteers.

Mmm-hmm. Or maybe not so much.

Next morning, a soberer Andrew suggests that his married friend might have trouble with the missus, and that he can back out if he wants. But guys are competitive, and Ben's having none of it.

So they're locked in — and the contest deadline is two days away.

Now, I know this sounds like a preposterous setup, but if you bear with writer-director Lynn Shelton a bit, she takes her concept places that are a lot more resonant than you'd expect. And she does it without shortchanging the laughs that flow from the fact that these guys are going to have male-intimacy troubles that go way beyond backslapping.

Shelton's really good at ferreting out the weak spots in the male ego — Andrew's need to prove that his post-college bohemian rhapsody wasn't a sham, and Ben's need to establish that his marriage hasn't made him risk-averse. And I'm gonna guess that, in a male-authored relationship comedy, Anna's wifely input wouldn't have been quite so nuanced as it is here.

Nor is any of this happening in the consequence-free zone inhabited by Judd Apatow movies, where boys will be boys, but only until the right girl brings them to heel. Apatow's jokes are generally well-crafted, but Humpday's laughs say a lot more about human nature.

The film ends up being about not just a really idiotic dare, but about the bounds of friendship and the bonds of marriage — and about how unsettling it can be to look at yourself in the cold light of maturity, and realize you're not who you thought you'd grow up to be.

All that, and really funny. I'm guessing Humpday will make its natural, easygoing leading men — Mark Duplass and Joshua Leonard — much sought after.

It's likely to get Shelton lots of offers, too — though here's hoping she keeps going her own way. It's so much more intriguing than Hollywood's. (Recommended)