Accessibility links
Are You Over The Acetaminophen Limit? A Food and Drug Administration advisory panel wants to reduce the public's exposure to the potent painkiller.

Are You Over The Acetaminophen Limit?

Are You Over The Acetaminophen Limit? 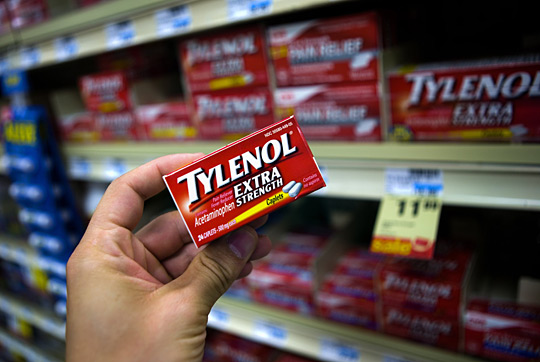 Extra Strength Tylenol is one of several common painkillers containing acetaminophen, an ingredient that is toxic in high doses.

So you can't go to sleep without your two tablets of Tylenol PM, and you've already taken three doses of Tylenol Arthritis Pain. Are you over the acetaminophen limit?

Yes, according to a Food and Drug Administration advisory committee. And the results could be serious liver problems.

By a vote of 21-16, the committee recommended lowering the daily maximum of acetaminophen, the active painkilling ingredient in Tylenol and many other products, from the current level of 4,000 milligrams. The problem is, the committee didn't specify what that limit should be, leaving consumers a bit puzzled.

Two tablets of Tylenol PM have 1,000 milligrams of acetaminophen. Three two-tablet doses of arthritis formula Tylenol have 3,900 milligrams, so it doesn't take much to overshoot the current maximum level.

What the committee and the FDA are weighing is the benefit of acetaminophen over other painkillers, such as aspirin, ibuprofen and naproxen. Acetaminophen does not cause the stomach upset these other painkillers can cause, but its relationship to liver toxicity has worried the agency for years.

The FDA is considering the panel's recommendations and has not yet decided whether to reduce the daily dose. But it's likely the FDA will act in some manner.

The agency issued new regulations for over-the-counter drugs in 2003 that contain acetaminophen, saying that acetaminophen content must be clearly listed. The FDA also required a statement saying that high doses can cause liver problems. Signs of problems include nausea, vomiting, jaundice and tenderness in the upper right abdomen.

There's not a lot of current information on how serious the situation is. According to an eight-year study conducted by the FDA during the 1990s, acetaminophen overdose caused 56,000 emergency room visits per year, and 458 deaths per year.

So what's your risk? It depends.

For adults, there's no clear number. Generally speaking, 10,000 to 15,000 milligrams is likely to do serious harm to the liver. That would be about 20 to 30 Extra Strength Tylenol, or 10 to 15 Vicodin plus 10 to 15 Extra Strength Tylenol in a day. More than 20,000 milligrams of acetaminophen can be fatal. But different people react differently: Some people can take more with no apparent damage, some can't; there's no way to predict.

How many people overdose is also an open question. One study found 275 cases of acute liver failure due to acetaminophen in the five years from 1998 to 2003. Half were a result of suicide attempts. But in half of the incidences, people didn't know that they were taking too much.

And that's a big concern to the FDA and its advisory committee. People unknowingly get acetaminophen in over-the-counter drugs like NyQuil and TheraFlu. And they get it in prescription opioid drugs like Vicodin and Percocet, too.

If people up their opioids to get more pain relief, they're taking more acetaminophen. If they've been taking acetaminophen all day and down some NyQuil to help them sleep, they may be going over the limit.

The FDA sometimes, but not always, follows the advice of its committees.

So there's likely to be acetaminophen in your future, if you want it. But you might be taking lower doses, or taking it separately from opioids.

In the meantime, what do you do?

Pay attention to what's in your medicine cabinet, says Sandra Kweder, deputy director of the FDA's Office of New Drugs. "Families need to ... make sure they know, for any medicine they're taking, how much is the most they should take at any one time or on any given day."