Accessibility links
Oscar Winner Karl Malden Dies At 97 The powerful, sensitive character actor with the twice-broken nose had stirring roles on the big screen — notably A Streetcar Named Desire — and was a hit on TV in The Streets of San Francisco. He later served as a pitchman for American Express. 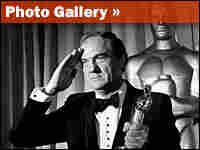 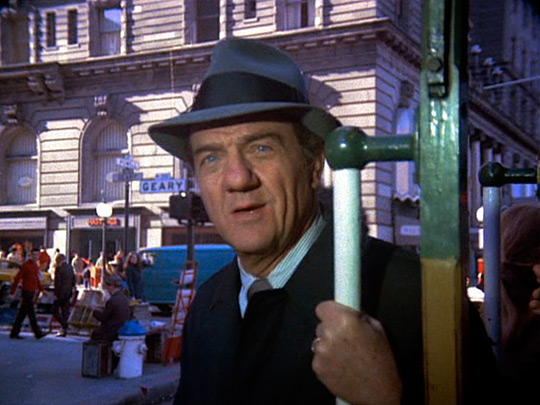 Karl Malden as Lt. Mike Stone in TV's The Streets of San Francisco, circa 1974.

Oscar-winning actor Karl Malden, a familiar face in movies, television and commercials, has died in Los Angeles at 97.

The actor's family informed the Academy of Motion Picture Arts & Sciences of his death on Wednesday at his home in Brentwood.

Malden's craggy face and twice-broken nose showed up in more than 50 movies. He won an Oscar as Best Supporting Actor for reprising his stage role as Mitch in A Streetcar Named Desire.

He also played a priest in On The Waterfront, the warden in The Birdman of Alcatraz and Gen. Omar Bradley in Patton.

He made his screen debut in the 1940 movie They Knew What They Wanted, appeared in more than 50 films and later served from 1989-92 as the president of the Academy of Motion Picture Arts & Sciences.

He gained more fame as Detective Mike Stone in the 1970s TV series The Streets of San Francisco, in which he co-starred with Michael Douglas.

Malden was also a long-running pitchman for American Express in a series of commercials airing over 21 years that began with the company's traveler's checks.

He warned a generation: "Don't leave home without them."

Born in Chicago in 1912, Malden didn't speak much English until his family moved from his father's Serbian neighborhood in Chicago to Gary, Ind., when he was 5.

While he tackled a variety of characters over the years, he was often seen in working-class garb or military uniform. His authenticity in grittier roles came naturally: He worked for a time in the steel mills of Gary after dropping out of college.

Malden said he got his celebrated bulbous nose when he broke it a couple of times playing basketball or football, joking that he was "the only actor in Hollywood whose nose qualifies him for handicapped parking."

After winning his supporting actor Oscar in 1951 for his role as Blanche DuBois' naive suitor in Streetcar, he was nominated again in 1954 for his performance as Father Corrigan, a fearless, friend-of-the-workingman priest in On the Waterfront. In both movies, he co-starred with Marlon Brando.

One of his most controversial films was Baby Doll in 1956, in which he played a dullard husband whose child bride is exploited by a businessman. It was condemned by the Catholic Legion of Decency for what was termed its "carnal suggestiveness." The story was by Streetcar author Tennessee Williams.

The Streets of San Francisco earned him five Emmy nominations. He won one for his role as a murder victim's father out to bring his former son-in-law to justice in the 1985 miniseries Fatal Vision.

He had acted sparingly in recent years, appearing in 2000 in a small role on TV's The West Wing.

In 2004, Malden received the Screen Actors Guild's Lifetime Achievement Award, telling the group in his acceptance speech that "this is the peak for me."

Malden first gained prominence on Broadway in the late 1930s, making his debut in Golden Boy by Clifford Odets. It was during this time that he met Elia Kazan, who later was to direct him in Streetcar and Waterfront.

Malden was known for his meticulous preparation, studying a script carefully long before he stepped into his role.

"I not only figure out my own interpretation of the role, but try to guess other approaches that the director might like. I prepare them, too," he said in a 1962 Associated Press interview. "That way, I can switch in the middle of a scene with no sweat."

"There's no such thing as an easy job, not if you do it right," he added.

He was born Mladen Sekulovich in Chicago on March 22, 1912. Malden regretted that in order to become an actor he had to change his name. He insisted that Fred Gwynne's character in On the Waterfront be named Sekulovich to honor his heritage.

He quit his steel job 1934 to study acting at Chicago's Goodman Theatre "because I wasn't getting anywhere in the mills," he recalled. "When I told my father, he said, 'Are you crazy? You want to give up a good job in the middle of the Depression?'

"Thank God for my mother. She said to give it a try."

Malden and his wife, Mona, a fellow acting student at the Goodman, had one of Hollywood's longest marriages, having celebrated their 70th anniversary in December.

Besides his wife, Malden is survived by daughters Mila and Cara, his sons-in-law, three granddaughters, and four great grandchildren.

Includes information from The Associated Press