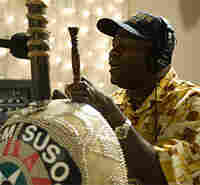 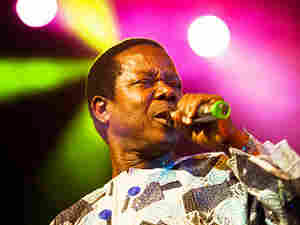 Returning to Seattle for his first visit in almost eight years, King Sunny Ade and his band, the African Beats, put the Seattle audience under a spell, playing an exciting show of Nigerian juju music. Ade introduced the distinctive Yoruban popular music to American audiences back in the early 1980's with a trio of breakthrough recordings for Chris Blackwell's Island Records.

Now in his early sixties, Ade still has a great time on stage with his band, which is an interesting mix of veterans and fresh talent. This performance featured one additional guitar and no pedal steel guitar. Instead, the emphasis was on the vocalists, singing Yoruba praises and proverbs in the tonal musical languages unique to juju music. There's also an incredible array of percussionists, led by three Yoruba talking drummers, who answer the vocal choruses with intricate musical polyrhythms. The dynamic agility of these musicians is amazing: They can stop on a dime and go from a whisper to a roar, all in the same song. The performers are constantly in motion, and the musical ambience is undeniable.

Ade is known to friends and colleagues by the honorific title "The Chairman," and with good reason: He has 52 band members back home in Nigeria, with 23 on stage on any given night. For practical reasons, The Chairman brought only 15 performers with him on this tour.

King Sunny's seventy-minute set was the perfect close to a great evening of music, which began with a recently recorded live session with kora master Foday Musa Suso. That was followed by a high-energy set of Ghanaian highlife by the Occidental Brothers Dance Band International from Chicago. True musical ambassadors, the Chairman and his band from Lagos, Nigeria, bring their musical joy and exuberance wherever they play. Their exhilarating performance was a great way to celebrate 25 years of African music on The Best Ambiance!

Foday Musa Suso is a griot from the Gambia, West Africa. The griots are the historians and storytellers of the Mande people, and also the traditional musicians in their society. Suso is a virtuoso player of the 21-string kora, which is similar to the harp and is one of the pre-eminent griot instruments. He was one of the very first kora players to move to the United States, back in 1977, when he settled in Chicago. There, he soon founded the pioneering African/American fusion group the Mandingo Griot Society, and with them made a series of ground-breaking albums on Flying Fish Records. Since the mid-80s, Suso has collaborated with Herbie Hancock, Philip Glass and jazz drummer Jack DeJohnette.

Suso has just re-located to Seattle from Chicago. I was very happy to welcome him to the KEXP studios for a solo session, which was broadcast on the 25th Anniversary program for The Best Ambiance Monday night. He performs traditional kora music as well as new originals, and makes use of looping electronics, making him sound like two kora players, to beautiful effect.