Accessibility links
Marine General Takes Fight To The Taliban Brig. Gen. Larry Nicholson, a veteran of Iraq, is leading the 2nd Marine Expeditionary Brigade in its fight against the Taliban in Afghanistan. He exhorted his troops in a recent speech to besiege the enemy until the Taliban is dead or surrenders. 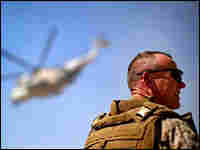 Brig. Gen. Larry Nicholson, commander of the 2nd Marine Expeditionary Brigade, walks to Camp Leatherneck after being dropped off by a helicopter during a day of visiting his Marines around southern Afghanistan. David Gilkey/NPR hide caption 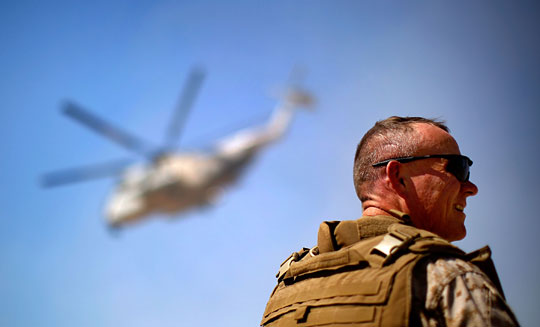 Brig. Gen. Larry Nicholson, commander of the 2nd Marine Expeditionary Brigade, walks to Camp Leatherneck after being dropped off by a helicopter during a day of visiting his Marines around southern Afghanistan.

Sgt. Maj. Ernest Hoopii and other Marines raise their weapons in solidarity after an address by Nicholson at Camp Leatherneck in southern Afghanistan. David Gilkey/NPR hide caption 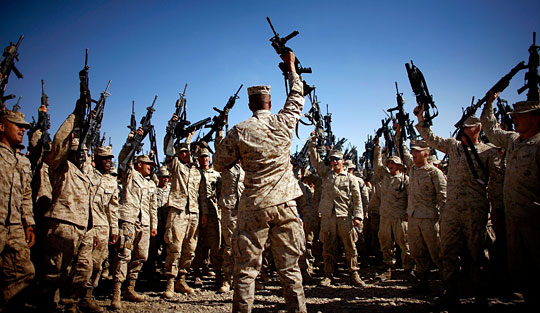 Sgt. Maj. Ernest Hoopii and other Marines raise their weapons in solidarity after an address by Nicholson at Camp Leatherneck in southern Afghanistan.

The leader of some 4,000 Marines who descended early Thursday morning on the Helmand River valley in southern Afghanistan is Brig. Gen. Larry Nicholson, a veteran of Iraq who was seriously wounded there five years ago.

Commanding general of the 2nd Marine Expeditionary Brigade, Nicholson has one of those lived-in faces — creased and craggy, like a boxer's or a veteran beat cop.

And he has the scars of a Marine who survived battle. It was Sept. 14, 2004, a day Nicholson remembers clearly in Iraq's Anbar province. The war was not going well.

That evening in his office, he was having trouble with his computer. He asked an aide to come look at the problem, and Nicholson stepped off to the side.

And then the room exploded. Pieces of the rocket tore into Nicholson's back.

"A rocket came into my office, killed Maj. Kevin Shea, who was my communications officer in there with me, and wounded me," he recalled.

Just under his left shoulder is an empty space that buckles through his uniform, large enough to swallow a fist.

"I lost most of my lats, my scapula was shattered. So I had a pretty good hole in my shoulder and back there," he said.

Nearly five years later, on this recent summer day in Afghanistan, Nicholson was pulling his armored vest over his shoulder and getting ready to head into the field, touring the New Jersey-sized area of Afghanistan where his troops are deploying.

In the village of Golestan, tucked between saw-toothed mountains, Nicholson strolled down the main street, a rutted dirt road bordered by mud huts and stalls. He greeted an Afghan policeman and a shopkeeper. Adults peered from windows. Chickens darted about.

The shopkeeper said through an interpreter that the Taliban take food and money, then vanish into the mountains.

Nicholson's challenge is fighting an elusive enemy that attacks and intimidates, then melts away. Even 10,000 Marines aren't enough.

Back at the Marine's base, Camp Leatherneck, Nicholson reviewed battle plans and concentrated on the details.

"Just thinking about do we have everything ready? Do we have the right gear? Are we going to the right places? I think the one leader's lament that I don't want to have is, as we're on those helos and we're flying into the zone, is going, man I wish I'd done just one more thing, or I wish I had taken time to look at that," he said.

Nicholson, who went to college at The Citadel in South Carolina before joining the Marines, knows he will lose men under his command in the current operation to drive the Taliban from the Helmand River valley.

"I know this is a tough business, and I think you can't be overly naive about casualties. And I take each one of them personally, and I anguish over each and every one," he said.

At the end of the day, Nicholson assembled a battalion under his command to brief them on the upcoming fight.

Some stood and some sat on a patch of dirt outside their tents at Camp Leatherneck as the general grabbed a microphone.

With his Marines on the ground hunting the enemy, Nicholson will circle the battlefield in his helicopter, watching his plan unfold.

"This is an enemy that's used to having small-scale attacks and having the coalition pull back. There is no pullback," he added. "We will stay on him, and we will ride him until he's either dead or surrenders."

Excerpts From Nicholson's Address To Troops

Following are excerpts from his remarks at Camp Leatherneck in Helmand province.

On the mission in the Helmand River valley:

Our job is to get in there and get it back [from the Taliban] ... We don't want to give the enemy one second to think about what he's going to do. Because we're going to be pushing so goddamn hard on the enemy. Our job is to go in there and make contact with the enemy — find the enemy, make contact with the enemy and then we'll hold on. This is an enemy that's used to having small-scale attacks and having the coalition pull back. There is no pullback. We will stay on him, and we will ride him until he's either dead or surrenders.

On the threat of roadside bombs:

Now, I'm concerned about the IEDs [roadside bombs] and I know you are, too. There's a hell of a lot of IEDs out there. As we get in there, we're going to get a better feel for who these people are who are putting them out. We're going to work the networks. And we're going to kill the guys that have a chance to go out there and lay them. But they are out there, and you need to know that.

On putting the Taliban on the defensive:

All too often, it is us who have to think about where we're going to go, where we're going to attack, what we're going to do. In this case, we're going to be so thick in his AO [area of operation] that he's going to have three choices: Stay and fight, which we hope he does; try to blend into the population and just pretend he's a local, in which case the Afghan army and police can sure as hell help identify that along with local leaders; and the third thing is run. And if he tries to run, we've got people waiting for him.

On the Marines' training and preparation:

On defeating the enemy:

We'll kill and capture a hell of a lot of enemy over these next couple of weeks, I'm confident of that. And I hope the enemy does try to go chest-to-chest with you. It would be a hell of a big mistake, and I don't think his last mistake. And I suspect we'll see some of that.

On supporting the Afghan people:

We need to make sure we understand that the reason we're here is not necessarily the enemy. The reason we're here is the people. What won the war in al-Anbar province [Iraq] and what changed the war in al-Anbar was not that the enemy eventually got tired of fighting. It's that the people chose a side, and they chose us. We offer the one thing the enemy can never offer, and that's a future; that's hope. The people are looking to you.

On the need to minimize civilian casualties:

We'll surround that house and we'll wait. And here's the reason: If you drop that house and there's one woman, one child, one family in that house — you may have killed 20 Taliban, but by killing that woman or that child in that house, you have lost that community. You are dead to them. You are done. And when I talked to the governor [about this scenario], I said, 'Yeah, but governor, we will have killed 20 Taliban.' And he goes, 'Yeah, but you will have also killed the local family, and the people will always remember that.' The Taliban didn't kill that local family. You did. And as far as they're concerned, you killed locals and you're done. They will do anything they can at that point to help the Taliban and help the enemy against you.

I tell you, personally I want the media out there because we've got a hell of a story to tell. I'll tell you, I've never in more than 30 years regretted embedding the media with the Marines that we've been associated with.

On the conditions in enemy territory, in the desert:

Bottom line, fellas, it's hot. It's gonna get hotter. Your packs are heavy. They're gonna get heavier. Our resupply to you is going to be tough. We're focused on getting you water. We're focused on getting you ammo. Chow will come later. Anything else will come later. We'll get you all the water and ammo you can use, but a lot of it may be by air drop, because the roads to get to you may not be open. And like I said, there is no cavalry. There is no reserve. You're gonna fight. And you're gonna stay there, and you're gonna fight until you win.