Accessibility links
Courtly Confusion: Rossini's 'Voyage To Rheims' The opera has a scatterbrained story, full of decidedly goofy characters. Yet Rossini's gift for musical profiling, plus a raft of bravura arias and ensembles, make this La Scala production a comic gem.

La Scala on World of Opera -- 'The Voyage to Rheims'

La Scala on World of Opera -- 'The Voyage to Rheims'

The Countess of Folleville delivers the brilliant, mock tragic aria "Partir, oh ciel, desio," when she discovers that her wardrobe has been ruined in a coach accident. At La Scala, the audience gave this performance by soprano Annick Massis a rousing reception.

Before everyone can truly enjoy their impromptu celebration, Melibea and Liebenskof (contralto Daniela Barcellona and tenor Dmitri Korchak) first have to kiss and make up, in the duet, "Al barbaro, rigore."

Sometimes, the best stories are found in places where, at first, it seems like there's no story at all — in everything from trendy American movies to bravura Italian operas. 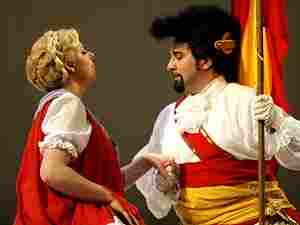 For example, think of the films of Robert Altman. In movies such as A Wedding, Nashville and Ready to Wear, he seems to dispense with a single, overall plotline, in favor of a whole raft of contrasting characters, all with individual stories of their own.

Even in his popular movie Gosford Park, which is ostensibly a murder mystery, the fascination lies less with solving the crime than with Altman's deft handling of multiple storylines and varying emotional textures. It's that complex interweave that makes the film so compelling, while the murder investigation sort of plods along as a framework for it all.

There are also plenty of operas that don't seem to have any single, obviously coherent story — and in some cases, that may not be intentional. But in Gioachino Rossini's 1825 opera The Voyage to Rheims, it's exactly what the composer had in mind.

Actually, despite the title, Rossini's opera isn't about a voyage at all. It's about an assortment of very different people, all stuck in the same place at the same time, and each with his or her own dilemmas to sort out.

There is the mysterious and beautiful poet, the pensive English lord, a love struck Russian general and a frivolous French countess. Not to mention a doting antiquarian, a beguiling Polish Marquise and a fiery Spanish seaman. And — as in Gosford Park — there's an assortment of servants all watching these privileged characters with a potent mixture of amusement and disdain.

The whole thing could seem a bit scatterbrained. But thanks to Rossini's genius for musical profiling, every character seems well worth our acquaintance — and the opera itself is pure entertainment from top to bottom.

On World of Opera, host Lisa Simeone presents Rossini's The Voyage to Rheims in a production from one of the world's great opera houses, and one of the few that can assemble the sort of virtuoso ensemble cast that the opera demands: La Scala, in Milan. The stars include sopranos Patrizia Ciofi, Carmela Remigio and Annick Massis, along with bass Alastair Miles, all led by conductor Ottavio Dantone.

The Story of 'The Voyage to Rheims' 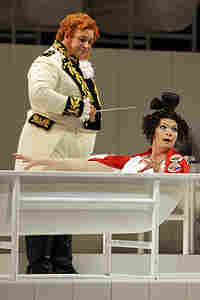 Rossini composed The Voyage to Rheims for a special occasion: the coronation of the French King Charles X. The opera may have been meant to convey a message of international friendship, and the music of the many characters sometimes conveys their nationalities, as well.

The action takes place at a spa hotel named for the symbol of French royalty: the Golden Lily. As PART ONE begins, guests from all over Europe are gathering at the hotel. When everyone has arrived, the plan is to form a multinational delegation to attend the king's coronation, held by tradition in the city of Rheims.

The innkeeper, Madame Cortese, has made meticulous preparations. Don Prudenzio, the preening house doctor, even inspects the day's meals to make sure everything is ready.

Among the first arrivals is the Countess of Folleville. She's determined to attend the coronation dressed in all the latest fashions. But her cousin Don Luigino brings bad news. The coach carrying her wardrobe has overturned, and everything was ruined. The countess launches into a sort of mock tragic aria, but things look up when a servant arrives carrying one luxurious hat that survived the wreckage.

Others on the scene include the music-loving Baron Trombonok, who has been designated as the trip's treasurer. There's also Don Profondo, an observant antiquarian. And before long, a complete love-triangle arrives: a ravishing Polish Marquise named Melibea, and two men who are both in love with her: Don Alvaro, a Spanish admiral, and the Russian general Count Liebenskof.

As the two men eye each other warily, and the mood is tense. Liebenskof is notorious for his jealousy, and it seems the only way to settle things is with a duel. But just as their confrontation reaches the boiling point, another guest chimes in. She's Corinna, a famous Russian poet. From inside the hotel, she's heard singing an improvised ode, describing a golden age of peace and brotherly love. Her song has a calming influence, and wiser heads prevail.

At the start of PART TWO, the innkeeper, Madame Cortese has a problem. If her guests are to continue on to Rheims, they'll need horses. She has made all the right arrangements, but no horses have yet arrived, and she wonders what's become of them. She also worries about her English guest, Lord Sydney. He's in love with Corinna — but he's kept those feelings to himself, secretly leaving flowers at her door.

Don Profondo pursues his passion for antiquities with the Englishman Lord Sydney, and then with Corinna and her Greek companion, Delia. Meanwhile, Chevalier Belfiore tries to further his reputation as a ladies' man. He claims the Countess Folleville among his previous conquests, and now he's trying his charms on Corinna — who turns him down cold. The Countess takes Belfiore's latest foray in stride, while Profondo watches in amusement.

Then comes the bad news. The guests are eager to continue their journey, but they have no horsepower. Every horse in the region has already been bought or hired for the coronation. As everyone wonders what to do next, Madame Cortese produces a letter from her husband. He's in Paris and describes the city's lavish preparations to celebrate the new king. Madame Cortese invites everyone to her Parisian home for the festivities. They all agree, and decide to leave for the city on the very next coach.

But in PART THREE, even heading for Paris proves problematic. It's approaching dinnertime, and there's no coach until tomorrow morning. No problem, the guests decide, they'll pool their traveling money for a grand banquet right where they are.

But there's still one sour note. Melibea, the ravishing Polish Marquise, has chosen Count Liebenskof over his rival, Don Alvaro. But now, Melibea and the Count are having a lovers' quarrel. Baron Trombonok intercedes. He says that if everyone is going to enjoy their evening, the two will simply have to kiss and make up. Melibea is reluctant, but a tender appeal from the Count wins her over for good.

That night, the Golden Lily's gardens are lit up, and the table is laid. The guests sit down to dinner, entertained by dancers and strolling musicians. The Baron proposes a round of toasts to the royal family, and each guest responds with music in his or her own national style. Then, accompanied by a harp, Corinna improvises a brand new poem and they all respond in a festive, final chorus.