Accessibility links
Summer Road Trip Songs Critic Tom Moon assembles a playlist for summertime driving that makes the miles whiz by, with some intense songs for staying alert during the day and chill-out tunes to renew the spirit in the evening, when you still have hours more to go.

8 More For the Road 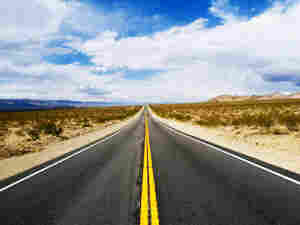 It's a rite of summer — assembling a playlist of music designed to accompany that road trip to the shore or the mountains. So as soon as the first trip of the summer was on the calendar, I began searching for music that could help make the ride from point A to point B a pleasurable experience.

I'm a creature of habit, so typically I gravitate toward the old faithful, tried-and-true driving companions — like the Grateful Dead and the Allman Brothers. For me, their sound is the essence of driving music — it just cruises, pulling you along with sheer locomotive force. You can chew up lots of miles with songs like the Allmans' "Southbound" blasting away.

But according to my family, I've relied on the Allmans a few too many times. So before hitting the road this year, I sought out only new stuff, like the self-titled debut of Hill Country Revue, a spinoff from the North Mississippi Allstars. These guys come from the blues – several are descendents of the great R.L. Burnside – but they specialize in a sweaty, supercharged update that owes as much to the Allmans as Muddy Waters.

In addition to intense rhythm, what I want in the car is music that on some level engages my brain. The latest from Green Day, 21st Century Breakdown, does that — it's a full-blown rock opera that looks at what it means to hold onto ideals when prospects are bleak. The Green Day mix — punk attitude, classic-rock hooks, comic book philosophy — is downright galvanizing.

Of course, you also need variety on the road — some intense music to keep you alert during the day, and music that can chill you out and renew your spirit in the evening, when you still have hours more to go. The violinist and singer Sara Watkins, of Nickel Creek, has a wonderfully desolate late-night tune called "Bygones" on her new solo album.

Some music makes a road trip better. And sometimes, the trip itself enhances the music. That's the case with Wilco. The band's seventh studio effort is just out, and its lighthearted melodies, ambling over tight Morse code guitar blasts, seem to blossom when you're moving, like the song "You Never Know."

The tune has a lot going for it, including a grabby refrain that's tailor-made for singing along. Roll the windows down, turn it up.

To me, it sounds like summer on the open road ...