Accessibility links
American Independence: 20 Years Of Merge Records In 1989, two members of the rock band Superchunk launched a tiny record label. Twenty years later, amid the struggles of the music industry at large, Merge has become one of the most respected and successful companies in the business. 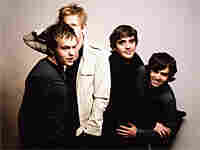 The band Spoon joined the Merge Records stable in 2001 after being dropped from Elektra Records. Autumn de Wilde hide caption 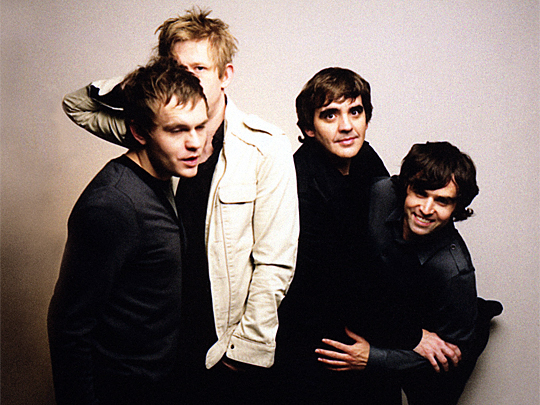 The band Spoon joined the Merge Records stable in 2001 after being dropped from Elektra Records. 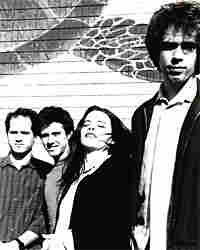 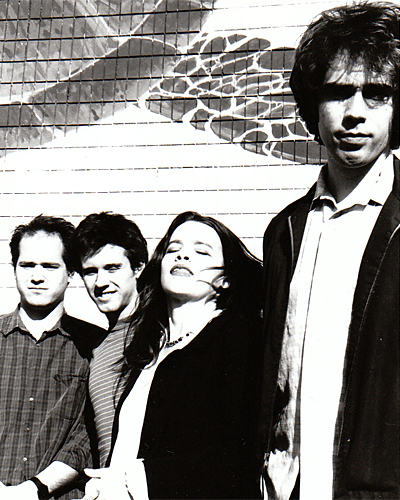 An early press photograph of Superchunk.

Everything Hits at Once 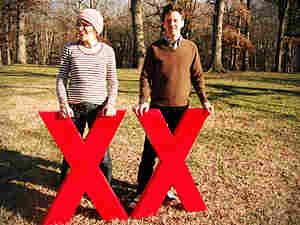 This year, Merge — a small record label based in North Carolina — marks its 20th anniversary. And at a time when the music industry as a whole is struggling, Merge is celebrating: It's throwing a four-day music festival this month in Carrboro, N.C.

What started as a tiny outlet for local bands has grown over those 20 years into one of the most respected and successful independent labels in the music business. Its roster includes M. Ward, Arcade Fire and Spoon. The label's releases have even begun to crack the top 10 spots on the Billboard top-selling album charts.

In the spring of 1989, two members of the Chapel Hill, N.C., band Superchunk — Mac McCaughan and Laura Ballance — were looking for a way to release singles and cassettes of their band and others made up mostly of their friends.

"We figured, why not put these singles out so there's documentation of this scene we really like?" McCaughan says.

Ballance continues: "A chance that people outside Raleigh and Chapel Hill would get to hear them, and something they could take on tour with them."

So they launched Merge. Today, starting a small label can be as simple as firing up the laptop; pressing "Record"; burning CDs and then posting samples on MySpace. But 20 years ago, the process was a little more mysterious.

"Growing up and looking at my dad's record collection," McCaughan says, "I didn't know how stuff got from music being played by the Rolling Stones to music on a record in my dad's living room."

Getting music into living rooms can still be complicated, especially when you're dealing with physical CDs. Once you've actually made them, you still have to get them into stores — mostly small, independent ones. Then comes publicity, and radio airplay, and touring to let fans know the records are out there.

What continues to set Merge apart from other labels trying to get music to fans' ears is that it hasn't built its reputation on a single band or sound, says Alex Ross, who writes about classical music for New Yorker magazine.

"It's kind of like a cross section of pop music, or at least alt or indie music, over the past 20 years," Ross says.

But even if the music doesn't all sound alike, there is a unifying sensibility, says Rich McLaughlin. McLaughlin runs The Alternate Side, an indie-music show on WFUV in New York. He says WFUV gets over 100 CDs a day — all vying for attention.

Every one of those Merge bands is hand-picked by Ballance and McCaughan, who still run their business out of North Carolina without any investment from a major label. They say the exposure that comes with a release by The Arcade Fire brings new listeners within their reach.

But working on a small scale doesn't mean that each new record isn't a gamble.

"Oh, they're all gambles," Ballance says. "Every single one."

McCaughan chuckles. "It's just that we're gambling with very small amounts of money," he says.

Which brings up one of the tough realities of running an indie record label.

"It doesn't always make bands happy to be told, 'We expect your record to sell 2,000 copies, and that's the way we're going to market it,' " Ballance says. "But I guess running a successful business means saying things that aren't always nice for people's feelings."

"They're not going to spend tons of money on things that aren't necessary," says Britt Daniel, lead singer for the band Spoon. "They're very frugal."

Spoon has become one of Merge's biggest successes. But at the time the musicians were signed, they looked like damaged goods. They had just been dumped by Elektra Records, and were anything but a sure bet. The group signed with Merge in 2001 and has stayed with the label ever since.

"They were OK with us putting out records that didn't have the expectation or requirement to be anything other than a good record," Daniel says. "When we put out Girls Can Tell, there was a small amount of investment on their part, and it wasn't necessary that we sold 100,000 records for them to turn a profit. So I guess long term, it was just about the ability to put out records at our own pace — the kind of records that we wanted to make — and do exactly what we wanted to do."

A big part of the label's anniversary celebration this year is a 14-CD, mail-order-only box set. McCaughan admits it's ridiculous, but insists that it's exactly the kind of package — extravagant, mysterious and lovingly curated — that he dreamed about when he and Ballance started Merge 20 years ago.

"We've always run the label like music fans," McCaughan says. "And our customer base is music fans. We started a label, and we run a label counting on there being people like us."

For two decades, at least, they've been right.