Accessibility links
Decades After WWII, Female Pilots Finally Honored A hotshot fighter pilot teamed up with one of her heroes to get the Congressional Gold Medal awarded to a group of women most Americans have never heard of. 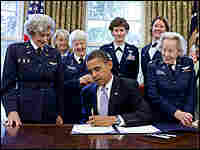 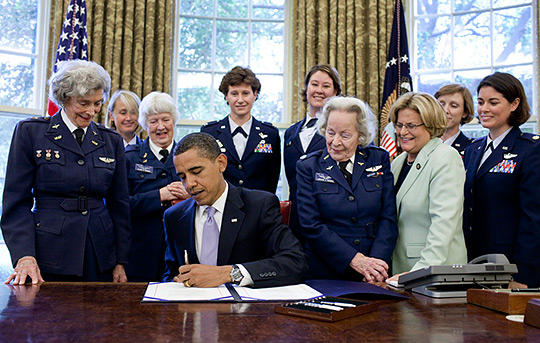 President Obama signs a bill Wednesday to award a Congressional Gold Medal to the Women Airforce Service Pilots in the Oval Office.

President Obama signed a bill Wednesday granting the Congressional Gold Medal to a group of women most Americans have never heard of: the Women Airforce Service Pilots, or WASP.

These were the first women to fly military aircraft. During World War II, they volunteered for noncombat duty, as test pilots and trainers. They freed up their male counterparts to go to Europe and fight in the war.

But even though they wore uniforms and worked on bases, they were never considered members of the military. Their contribution to the war effort was so controversial, in fact, that all records pertaining to their service were sealed and deemed classified in 1944. That pretty much consigned the WASP to the dustbin of history for decades.

One of the WASP, Deanie Parrish, started an organization called "Wings Across America" to document the story. For the past 10 years, she and her daughter Nancy have led the effort to get a Congressional Gold Medal for the women. But it wasn't until a young female fighter pilot in today's Air Force championed their cause that the bill became a reality.

That pilot is Maj. Nicole Malachowski, the first woman to fly in the ultra-elite Thunderbirds. The WASP are her personal heroes, so she spent months of her own time, out of uniform, making sure these women finally got their due.

Guy Raz talked to the two pilots, each a groundbreaker in her own right.