Accessibility links
U.S., Russia Agree To Pursue Nuclear Reduction President Obama and Russian President Dmitry Medvedev have struck a preliminary deal to reduce their nations' stockpiles of nuclear warheads to as few as 1,500 each, pointing their arsenals toward the lowest levels of any U.S.-Russia arms control agreement. 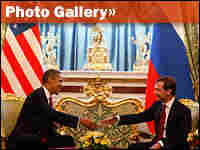 President Obama and Russian leader Dmitry Medvedev agreed in principle Monday to reduce their permitted nuclear arsenals by nearly a third during a Moscow summit to try to ease tensions between the former Cold War rival nations.

Obama, attending his first U.S.-Russia summit, said he and Medvedev were "committed to leaving behind the suspicions of the past" and repairing relations that have "suffered a sense of drift" in recent years.

The tentative nuclear accord is intended to serve as a follow-up to the Strategic Arms Reduction Treaty, which is set to expire Dec. 5. START was signed in 1991, just five months after the collapse of the Soviet Union and nearly a decade after it was first proposed by President Reagan.

Medvedev called the framework arms control agreement — which would reduce the number of nuclear warheads allowed to between 1,500 and 1,675 from the 2,200 under START and cut the number of ballistic missiles to between 500 and 1,100 from an upper limit of 1,600 — a "very important ... reasonable compromise."

Between them, the United States and Russia possess more than 90 percent of the world's nuclear weapons. The new caps on nuclear arsenals would need to be fully implemented by 2012.

A White House statement said the new treaty "will include effective verification measures," and Obama said it would be completed by the end of the year.

Washington and Moscow also pledged to "broaden and deepen long-term cooperation to further increase the level of security of nuclear facilities around the world, including through minimization of the use of highly-enriched uranium in civilian applications and through consolidation and conversion of nuclear materials," according to a joint statement.

Among the deals meant to sweeten Obama's two days of talks here and show progress toward resetting badly damaged U.S.-Russian relations was permission from Moscow for the United States to transport arms across its land and airspace into Afghanistan for the war there. The White House says the deal will save the United States $133 million a year, by waiving transit fees and shortening flying time.

Other side deals included the resumption of military cooperation, suspended after Russia invaded neighboring Georgia last August and sent relations into a nosedive.

Although the invasion strained U.S.-Russian ties, Obama said Monday that whatever the differences over Moscow's military move, "no one has an interest in renewed conflict."

The two leaders also announced an agreement to form a new joint commission to try to account for missing service members of both countries from World War II, the Korean War, the Vietnam War and the Cold War, as well as Soviet military personnel still missing from Moscow's 10-year occupation of Afghanistan.

At a joint news conference held in an ornate hall at the Kremlin, Medvedev described his meeting with Obama as "a very useful, businesslike discussion" but said the task before the two leaders was "not easy because the backlog of problems is quite impressive."

That backlog includes such thorny issues as NATO plans to expand into former Soviet satellites and the U.S. pursuit of a missile defense shield in Europe, both of which have angered Moscow.

The two sides remain stalemated over the planned U.S. missile-defense system, pushed hard by Bush and under review by Obama. Both sides hardened their positions ahead of the summit. The U.S. contends its program is designed to protect U.S. allies in Europe from a potential nuclear attack by Iran, but Russia sees a shield as a first step toward a system that could weaken its offensive nuclear strike potential.

Obama has previously said he would not accept any linkage between the missile shield and nuclear arms reduction, but there were signs that stance was being softened. "Any discussion of nuclear strategy, security has to include defensive as well as offensive capabilities," he said.

The U.S. president reiterated that the missile-defense system was aimed at stopping a rogue attack from Iran "or some other state" and that "there is no scenario from our perspective that would provide any protection against a mighty Russian arsenal."

Medvedev said the issue was a difficult subject but asserted that "the linkage between offensive and defensive weapons is already being made. Now this linkage is being stated and brings in the possibility of compromise."

The U.S. president was set to meet with Prime Minister Vladimir Putin on Tuesday.

Asked who holds the real power in Russia — Medvedev or his powerful predecessor and mentor, Putin — Obama demurred: "My understanding is, President Medvedev is the president ... and Prime Minister Putin is the prime minister."

The Moscow summit starts a weeklong trip for Obama that also features G-8 meetings, a visit with the pope in Italy and a speech in Ghana.

Popular across much of Europe, Obama faces a far more skeptical population in Russia.

A poll released Sunday found that only 23 percent of Russians surveyed have confidence that Obama will do the right thing in international affairs. The University of Maryland's WorldPublicOpinion.org reported that just 15 percent of those polled said the U.S. is playing a positive role in the world; most said the United States abuses its power.