Accessibility links
A Small Step To The Moon, A Giant Leap To Mars The first astronauts — swaggering test pilots and fighter jocks — set NASA's original can-do tone. But after NASA reached the moon, senior people left and were replaced by management types. NASA's dynamic has slowed, but the sheer distance to Mars is not to be underestimated. 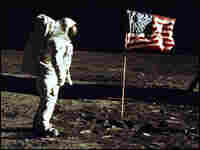 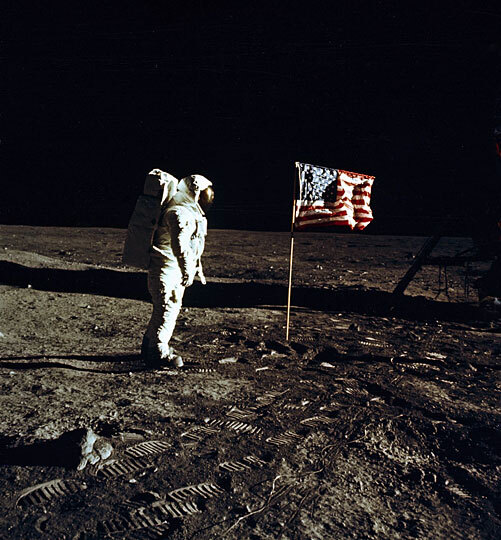 Astronaut Edwin Aldrin stands beside the deployed U.S. flag on the moon's surface. 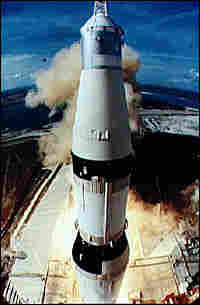 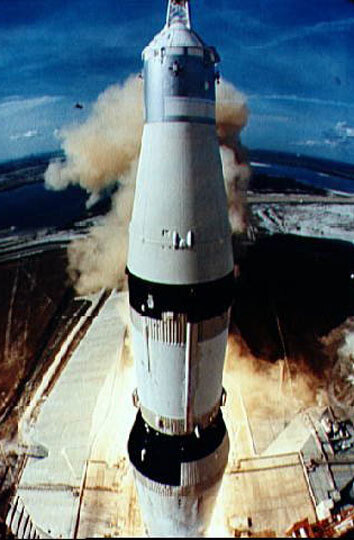 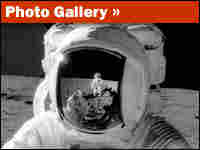 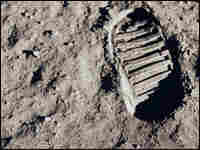 Buzz Aldrin's boot print from the Apollo 11 mission. It is one of the first steps taken on the moon. NASA hide caption 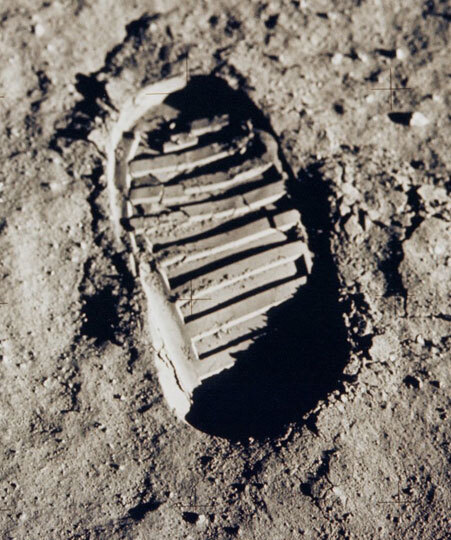 Buzz Aldrin's boot print from the Apollo 11 mission. It is one of the first steps taken on the moon.

Drive 30 miles south of Houston in the dead of summer, and it's easy to imagine what it must have been like back in 1963, cruising along with your young wife, hearts pounding with anticipation as you close in on your incredibly bright future as one of America's chosen astronauts.

"We arrived in Houston under the sweltering heat, staying at the Rice Hotel," says Buzz Aldrin, the second human to walk on the moon. He doesn't have to imagine — he remembers everything about his seven years at the Manned Spacecraft Center, as it was called back then.

"It was just a very exciting time," he says. "We would fly in our T-38's down to Florida for the launches of the Gemini program. Big construction that was taking place down there."

Aldrin says they worked hard and knew how to enjoy themselves — occasionally popping down to Cape Canaveral in sleek fighter jets to see how their future launchpad was coming along.

Last week — some 40 years later — the space shuttle Endeavor blasted off to rendezvous with the space station orbiting above. The nation barely looked up from its preoccupation with growing unemployment, the Sotomayor hearings and the latest on what killed Michael Jackson. Perhaps no person has borne longer witness to the arc of NASA as an institution than spacesuit engineer Joe Kosmo. For the past 48 years, Kosmo has been at the heart of the organization, designing spacesuits for Mercury, Gemini, Apollo and the space shuttle astronauts.

"Well, there were a lot of fun days," Kosmo says. "We were a lot younger, and times were different. Maybe the level of bureaucracy wasn't so high."

Kosmo says that it is instructive to remember that almost all of the first astronauts were test pilots and fighter jocks of the most swaggering sort. They infused the NASA culture with a confidence about taking chances; the prospect that their next flight could be their last was already familiar. Even when Apollo 1 caught fire in 1967 and astronauts Gus Grissom, Ed White and Roger Chaffee died in the capsule, Kosmo says the predominant culture did not change. He repeats now what they said to each other in 1967 about Grissom, White and Chaffee.

"They would have been the first to say, 'Keep going — don't stop! We understand what the risk is,' " Kosmo says.

Kosmo says the prevailing reaction was one of grief and remorse, not anger and finger-pointing. Both inside NASA and out, it was felt that America was competing with the Soviet Union — that the outcome of both the space race and the arms race was very much in doubt, and that there was no time to waste.

"Some of our reports may have been two pages long with a couple of recommendations," Kosmo says. "That's how we marched."

But Kosmo says NASA began to change as soon as America landed on the moon.

"Actually, at the landing, the Apollo 11 landing, there were a lot of senior people leaving," he says. "And I wondered, 'Why is that?' "

The reason, it turned out, was simple: America had won the race — the Russians beaten so decisively they abandoned the attempt. For many at NASA, with the contest over it was time to move on. Choice jobs in academia, with military contractors and on Wall Street awaited them.

As its top talent began to drain away, and with the moon trophy already in hand, Kosmo says NASA grew more cautious. Leaders were replaced by executives more inclined to manage. NASA grew more bureaucratic. The shuttle program, the Hubble telescope and the international space station have all been successful, but none captured the imagination like the quest for the moon.

The Desire To Explore

In NASA's Extravehicular Mobility Unit (EMU) lab, engineers are working on the constellation program, preparing to go back to the moon and perhaps Mars. Extravehicular Mobility Unit is NASA-speak for spacesuit. With band saws, drills, big garage doors and blueprints spread everywhere, it looks like they could make spacesuits or perhaps pimp your ride in here. Of course, the big mural on one wall kind of gives it away; it shows an astronaut on the moon over the phrase, "Time to go for another walk!"

"I couldn't think of anything else I'd rather be doing, any work that is more exciting," says 24-year-old Kate Mitchell, one of the spacesuit engineers.

She adds, "I wake up every morning and I can't wait to get to work to do this test or that test."

Mitchell and her 26-year-old colleague Dick Watson's eyes glow when they talk about walking on distant planets. These two young engineers have no doubts this is part of what America should be doing with its money and talent.

"It's kind of one of those basic human questions," Watson says. "Why did Christopher Columbus decide to sail across the ocean? There's always a desire to explore, to expand out, to realize that we are not the center of the universe."

Watson's instinct to explore new worlds is part of the debate about where NASA should go next. Building new spacesuits is the least of the daunting challenges a voyage to another planet would face.

It is the sheer size of space that's the immediate problem. A mission to Mars would be 180 days each way. The astronauts would have to live on Mars 500 days before the planets are aligned for the return trip — that's nearly three years in space. NASA is not yet close to that capability. Kosmo recalls that during that incredible race to the moon, they had a plan to get to Mars by 1987. Given how far they had come and how fast, it seemed completely within their grasp.

"You look back on the 40 years, and it's hard to believe we went to the moon," Kosmo says. "I was out the other night smoking a cigar in the backyard looking at the moon, thinking, 'Jeeze, we were there 40 years ago. I hope we make it again soon so I can see it once more.' "

For Kosmo, Americans walking on the moon was among our finest hours. He hopes it's nothing compared to what the future holds.