Accessibility links
Vacation In Space? It's Possible ... For The Rich We missed the deadline set by 2001: A Space Odyssey, but private companies are trying to realize the potential for space tourism. One firm hopes to offer safe, regular flights within the next three years. But the price remains out of reach for most. 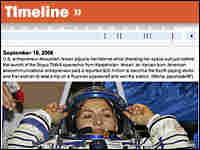 Learn About The History Of Commercial Space Travel 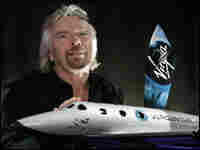 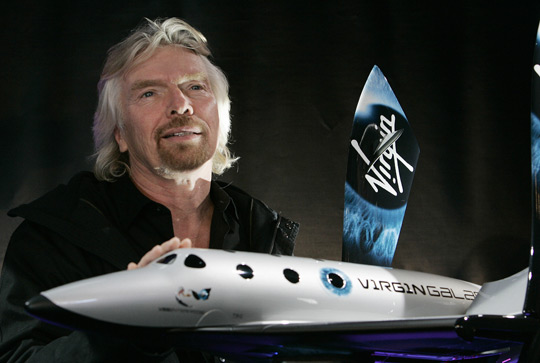 Sir Richard Branson, founder of Virgin Galactic, with a model of the Spaceship Two. Virgin Galactic will attempt to launch paying customers into sub-orbital space flights with the spacecraft.

A year before Neil Armstrong first stepped from the lunar lander in 1968, Stanley Kubrick released the groundbreaking film 2001: A Space Odyssey. It promised not a few tentative steps in space, but a routine passenger flight set to a waltz.

Sure, it was science fiction, but at the time, some of it seemed like it might happen — that space travel would be commonplace. In the film, a ship that looks a lot like the space shuttle glides into the dock of a huge space station. The ship doesn't say NASA; it says Pan American Airways. The space station is run by Hilton Hotels.

Howard McCurdy would have liked the voyage. McCurdy is a professor at American University and the author of a number of books on the history of space flight.

"I'm a rocket boy," McCurdy says. "I was raised on all this stuff, so it was a disappointment to me that we've spent 30 to 40 years spinning our wheels and not accomplishing what we should have accomplished in the 1970s, which is easy access to space."

McCurdy cites two reasons why that hasn't happened: The first is political. The space shuttle was originally conceived as it is shown in the film: a passenger vehicle. But when NASA got funding for it in the 1970s, there was no space station to go to yet.

So the space shuttle became essentially a cargo vehicle, instead of a space bus.

The second reason, says McCurdy, is the revolution in electronics.

"Robotics has advanced at the pace people thought human spaceflight would advance," he said.

Unmanned probes and landers like the Mars Rovers have been able to explore terrain, take measurements, analyze samples and send reams of data back. Yet people want to go to space, to look back at Earth, to experience weightlessness.

Governments, though, have had a monopoly on space travel.

"It's really been a lack of competition," says Eric Anderson, who heads a company called Space Adventures.

He adds that during the space race with the Soviet Union, the technology involved in spaceflight was practically a state secret.

"You know, you hear stories about how we had the drawings for the moon rockets put away," Anderson says. "This is completely the reverse of the approach that we should have taken."

In the last decade, things have opened up: Engineers and entrepreneurs have created a new wave of companies that plan to launch satellites and science experiments — as well as tourists — into space. There's even a company designing an inflatable space hotel.

Many of these ventures will fail. Some, like Space Adventures, have already succeeded. But so far, the only way to get to orbit the Earth is still a government spaceship. Anderson books seats for his customers on the Russian vehicles that service the international space station.

Still A Playground For the Rich, For Now

"We are selling space experiences to the public anywhere from a few thousand dollars up to tens of millions of dollars," Anderson says. "And so far, we have been the only company to take private citizens to space."

For that, you have to spend at least $20 million. Not exactly the price of a family vacation, though six people have paid it in the last eight years.

Virgin Galactic, owned by Richard Branson, is offering suborbital flights for $200,000. It hopes to have safe, regular flights within the next three years. Will Whitehorn, president of Virgin Galactic, says 300 people have already signed up. He likens the price to the cost of the first transatlantic airplane flights in 1939.

Eventually, the cost — $200,000 for a suborbital spaceflight — could come down dramatically, as well. Maybe even low enough so that 40 years from now, tens of thousands or even millions of people actually will be doing a weightless waltz.