Accessibility links
'Knocked Up': Good Girl Meets Lost Boy, Sparks Fly Judd Apatow (The 40-Year-Old Virgin) is king of the dirty-minded-but-sweet relationship comedy, and the chemistry in his latest makes for a screwball movie with a pretty big heart. 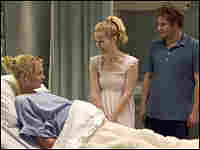 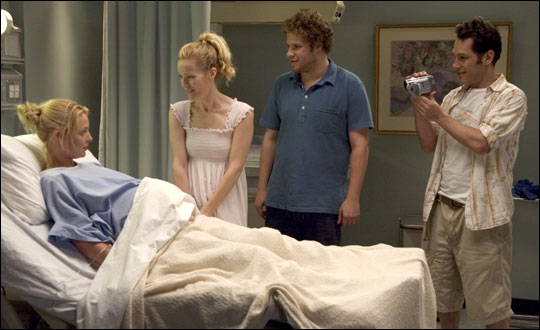 Katherine Heigl, Leslie Mann, Seth Rogen and Paul Rudd consider the consequences of love (and marriage) in Knocked Up.

Imagine a 20-something Wendy and Peter Pan, and you've got the leads of Knocked Up: She's practical, he's flighty; she's mature, he's an overgrown kid. She's got family, he's living in a suburban clubhouse with a bunch of stoner-buddy "lost boys." And like those buddies, he hasn't grown up.

So one night, these two — here named Alison and Ben — meet at a neighborhood bar, and after a lot of alcohol and a long night of partying, he gets really lucky.

She gets waaaay less lucky, though she doesn't discover that until eight weeks later, with the help of a pregnancy test. So Alison gets back in touch with Ben, just to talk. Again Ben feels lucky, at least before she tells him he's going to be a dad; again, Alison feels less so, as she learns, among other things, that Ben's living here illegally (he's Canadian), has no real job, and has a grand total of about $900 in the bank. Which he figures will last him at least two years.

The thing is, he's trying to sound impressive.

Now, writer-director Judd Apatow has been establishing himself lately as king of the dirty-minded-but-sweet relationship comedy, and he's worked some neat variations on it here. Not just the Peter Pan thing upended by parenthood, but a whole theory about how men and women approach relationships, and what that does to them when they get to marriage.

Alison's brother-in-law is succinct on the subject: "Marriage is like an unfunny, tense version of Everybody Loves Raymond, but it doesn't last 22 minutes. It lasts forever."

Small wonder Ben doesn't want to leap right into fatherhood. The mix of meanness and wistfulness in that line is an Apatow trademark; it's delivered here by Paul Rudd, one of a bunch of very funny actors who are starting to seem like the director's personal repertory company. Seth Rogen, for instance, who plays Ben, has been pretty hilarious in Apatow comedies stretching from The 40-Year-Old Virgin all the way back to TV's Freaks and Geeks.

Finally given the lead role here, Rogen is scruffy and vulnerable and appealing enough to persuade you that Katherine Heigl's forthright Alison might conceivably give him a tumble after a drink. Or maybe 12.

Which is good, because despite its R rating, and its drug references, and its crude language, and its delivery-room shots of a baby crowning — the last has to be a first in a mainstream movie — Knocked Up isn't as outrageous as it is human. It's a morality tale about the importance of growing up, not just growing older. And what sets it apart from the soulless laugh-fests that usually pass for comedy in Hollywood is that at heart, Knocked Up has heart.