Accessibility links
Was Explorer Meriwether Lewis Murdered? Explorers Meriwether Lewis and William Clark blazed a trail west of the Mississippi River in the early 1800s. Then in 1809, Lewis was found dead. While most historians attribute his death to suicide, some historians — and his descendants — question whether Lewis was murdered. 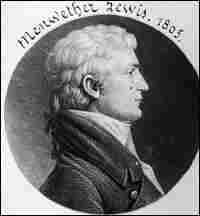 Meriwether Lewis, depicted here in 1805, died in 1809. Most historians have attributed his death to suicide, but some question whether the explorer was murdered. Lewis' descendants have asked the National Park Service to exhume the body for clues. Hulton Archive/Getty Images hide caption 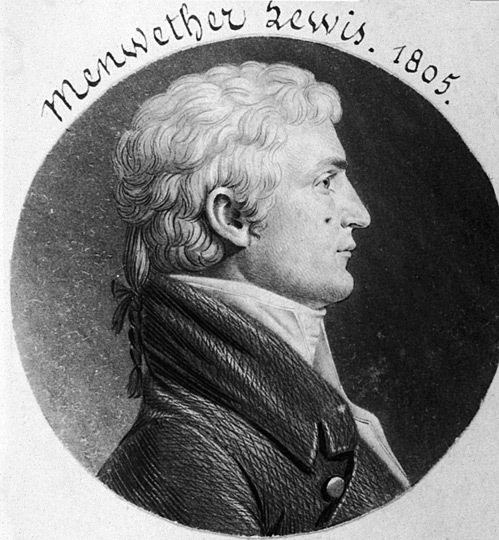 Meriwether Lewis, depicted here in 1805, died in 1809. Most historians have attributed his death to suicide, but some question whether the explorer was murdered. Lewis' descendants have asked the National Park Service to exhume the body for clues.

When explorers Meriwether Lewis and William Clark blazed a trail through the Rocky Mountains to the Pacific Ocean in 1806, they were hailed as heroes.

But three years later — at the age of 35 — Lewis was dead. Most historians call his death a suicide, but Lewis' descendants aren't so sure.

They held a news conference Wednesday to demand an investigation.

A Monument To Mystery

In the peaceful green hills of central Tennessee stands a 20-foot limestone column surrounded by old oaks. For some, it's a memorial to Lewis, who is buried below. For others, it's a monument to mystery.

In October 1809, Lewis stopped at a nearby inn en route to a meeting with President Thomas Jefferson. The next day, servants found Lewis shot dead. A companion, James Neely, wrote a letter to Jefferson: "Sir: It is with extreme pain that I have to inform you of the death of his Excellency Meriwether Lewis, governor of upper Louisiana, who died on the morning of the 11th, and I am sorry to say, by suicide."

No one witnessed the death, but Jefferson accepted the report of suicide, noting that Lewis was prone to depression.

Now, however, some historians have raised doubts, including John Guice, a retired professor of history at the University of Southern Mississippi and editor of By His Own Hand?: The Mysterious Death of Meriwether Lewis. He says there's scant evidence for suicide and several possible motives for murder.

"There were many people in St. Louis who were unhappy with his decisions concerning property and mining rights and money," Guice says.

He adds that Lewis was in a dangerous neighborhood in Tennessee, carrying a large amount of cash. "What happened to the money he had with him?" Guice says. "When they inventoried his possessions, there was no mention of any money."

Possible Exhumation To Find The Truth

Lewis' descendants also challenge the suicide claim and have asked the National Park Service to let them dig up his remains. They even hired a public relations firm, created a Web site and provided DNA.

"The family has been united for a very long time to have an exhumation and to find the truth," says Howell Lewis Bowen, Meriwether's great-great-great-great-nephew. "We do think he deserves a hearing."

James Starrs, a retired professor of law and forensic sciences at George Washington University and co-author of a book about the explorer's death, says Lewis' bones might yield some answers even after two centuries.

If that's also the case with Lewis — and if Starrs, say, found a wound to the back of the skull — historians might be forced to reconsider the suicide claim.

But Patty Choate, president of the Tennessee chapter of the Lewis and Clark Trail Heritage Foundation, questions the need to know.

Standing by Lewis' grave, she points out that no murderer could be brought to justice and that the manner of death should not change public sentiment regarding Lewis.

"I think he was a great explorer — probably one of the greatest we've ever had," Choate says. "And nothing's going to change my mind about that, one way or the other."

The National Park Service has twice refused to let the family dig. But officials are weighing a third request to exhume the remains so scientists, historians and relatives can finally put to rest this 200-year-old mystery.